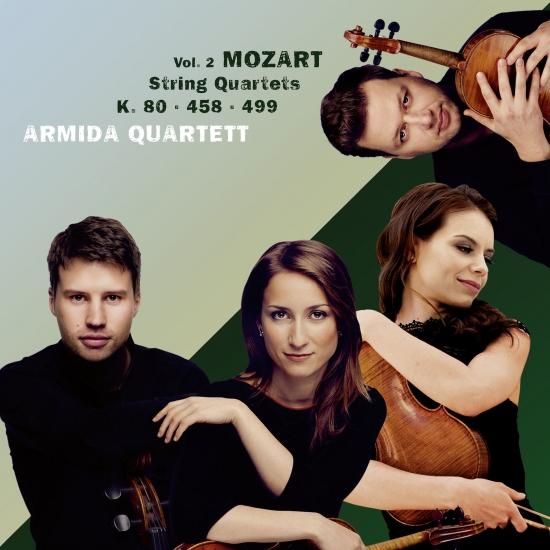 The new album MOZART Vol. 2 of the Armida Quartet will be released on 28 June 2019 on CAvi-music. The recording was co-produced by Bayrischer Rundfunk BR-KLASSIK and features KV 80, KV 458 (The Hunt) and KV 499 (Hoffmeister Quartet) by Wolfgang Amadeus Mozart. A special feature for all string quartet fans is the use of the new Mozart Urtext Edition by G.Henle Verlag!
"A composer’s manuscript obviously represents the most important stage of composition, the first valid formulation of a work. But in this case the discrepancies in the first edition are so striking that we must assume that Mozart made the changes himself, thus transcending the manuscript stage. For example, at the beginning of the development section in the first movement of the “Hoffmeister” Quartet K. 499, all previous editions indicated forte. The new Henle edition omits it, since it was added later. The Armida Quartet plays the passage pianissimo, and I find this thoroughly convincing.“ (Wolf-Dieter Seiffert, G.Henle Verlag)
The Armida Quartet is holding an unusual kind of rehearsal, skimming through three Mozart string quartets with musicologist and Henle’s publishing director Wolf-Dieter Seiffert. The focus this time is not on sound quality, musical character, or developing an extended formal overview – all qualities for which the Armida Quartet is well-known – but on achieving a good match between philological accuracy and practical music-making.
Seiffert is working on a new edition of the Mozart string quartets for his publishing house in Munich, and has sought out direct contact with the members of the Berlin string quartet to clarify doubts regarding dynamics, ties and tempi (see the interview with Mr. Seiffert in the booklet). When a case is truly difficult, the most technically feasible or desirable alternative helps him decide which variant will ultimately figure in the new Urtext edition: will it be a variant from Mozart’s autograph, or from the first printed edition? This method is particularly productive when an editor can work with ensembles as well-versed in historical performance practice and aesthetics as the Armida Quartet.
The publishing house is not the only partner to profit from this new form of dialogue between musicology and practical music-making. Martin Funda, the Armida Quartet’s first violinist, says that he has thereby gained a better grasp of several matters not often mentioned among performers: “For instance, we have become familiarized with several stages of the procedure from the autograph manuscript to the copyist, then leading to the first and second editions: back then, much of the work involved in publishing music was truly laborious, and for us it is fascinating.”
A closer look at the process ultimately shows that any modern edition is a compromise between several sources, some of which stand in contradiction with one another. The much-vaunted “last authorized version” may have existed in the case of a perfectionist 20th-century egomaniac such as Karlheinz Stockhausen, but we seldom encounter it in pragmatically oriented geniuses of the likes of Bach or Mozart. (Excerpt from the booklet notes by Michael Struck-Schloen)
Martin Funda, violin
Johanna Staemmler, violin
Teresa Schwamm, viola
Peter-Philipp Staemmler, cello

Armida Quartett
Since its spectacular success at the ARD International Competition in 2012, at which the Armida Quartet received first prize, the audience prize and six other special awards, the career of the young Berlin string quartet has developed sensationally. The quartet has been nominated by the Elbphilharmonie Hamburg as one of the Rising Stars of the European Concert Hall Organisation for the 2016/2017 season.
The Armida Quartet has also made its debut at such renowned summer festivals as the Schleswig-Holstein Festival, the Rheingau Music Festival, the Mecklenburg-Vorpommern Festival, the Davos Festival and the Heidelberg Spring Music Festival. In September 2014 the quartet was invited to join the BBC’s distinguished New Generation Artists series, which offers the ensemble the opportunity to appear in various concerts and broadcasts for two years.
Founded in Berlin in 2006, the quartet took its name from an opera by Haydn, the “father of the string quartet”. The ensemble studied with members of the Artemis Quartet, also drawing musical inspiration from Natalia Prischepenko, Alfred Brendel, Tabea Zimmermann, Eberhard Feltz and Walter Levin. The quartet has participated in master classes with the Alban Berg, Guarneri and Arditti Quartets and currently works with Rainer Schmidt (Hagen Quartet) and Reinhard Goebel.
The Armida Quartet won first prize at the Geneva Competition in 2011 and received several scholarships, including those of the Irene Steels-Wilsing Foundation and the Schierse Foundation in Berlin. The young ensemble’s debut CD, featuring works by Béla Bartók, György Ligeti and György Kurtág, was released in 2013 and selected by the German Record Critics’ Award for its critics’ choice list.
During the current season the quartet appears for the first time in Norway, China, Taiwan and Singapore, also presenting concerts in Stuttgart, Munich, Hamburg, Bonn, Antwerp and Geneva.
Frequent collaboration with other artists is a priority for the Armida Quartet – the ensemble has worked with Anna Prohaska, Thomas Hampson, Ewa Kupiec, Max Hornung and Tabea Zimmermann. The four young musicians of the Armida Quartet have taught chamber music at the Berlin University of the Arts since October 2012.