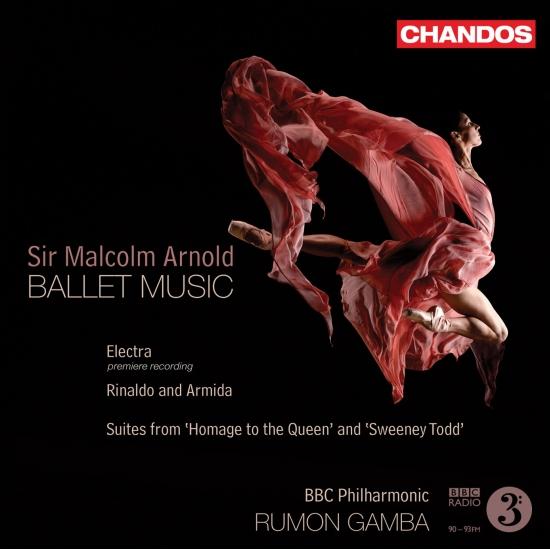 Rumon Gamba: ‘Having recorded symphonies and film music by Malcolm Arnold and knowing how well his music is received by audiences around the world, I was surprised that there was no disc dedicated solely to his music for the ballet. The four scores featured here on this disc have such strong musical ideas and dramatic narrative, to say nothing of their sheer beauty and passion, that they come alive as pieces of music in their own right. And such contrasts on this programme – brutality and energy (Electra), sweeping romanticism (Rinaldo and Armida) and humour in all its guises (Sweeney Todd). I particularly enjoyed recording Rinaldo and Armida which deserves its place in the repertoire alongside those ballet scores we hear all too often in the concert hall.’
Arnold’s first ballet score, Homage to the Queen was commissioned to honour the Queen’s Coronation and performed by the Royal Ballet at Covent Garden in 1953. The Times wrote of the 2006 Royal Ballet revival: “Malcolm Arnold’s score is rich in majesty and filled with colour. A pleasure to hear it again.” The ballet suite begins with a Prelude strongly reminiscent of the ceremonial idiom of William Walton’s Coronation marches. The initial success of Homage quickly led to another ballet commission for Arnold. In 1954 he composed Rinaldo and Armida, a one-act ‘dance drama’, and guest-conducted the first performance himself at the Royal Opera House on January 1955. Rinaldo was based on an episode from Torquato Tasso’s poem Ierusalemme liberate (1581). Electra, which here receives is premiere recording was commissioned by the Royal Ballet and first performed in 1963. This work allowed Arnold to tap the darker side of his musical personality, as evidenced in several of his mature symphonies.
Chandos is well known for its recordings of Malcolm Arnold’s music – indeed, they are generally acknowledged by most to rank amongst the finest available – and the recordings of Arnold’s film music are best sellers. This unique anthology of ballet music should prove as popular, for the music is similarly illustrative and entertaining. Few of the ballets are represented in the catalogue and one has never before been recorded (Elektra). However they aptly demonstrate Malcolm Arnold’s versatility, covering a broad range of musical moods.
“Listening to the selection recorded here, you're conscious of the variable mixture of practicality and inspiration that went into [Arnold's ballet scores]...The performances, with Rumon Gamba conducting the BBC Philharmonic, are terrific.” (The Guardian)
Malcolm Arnold: Homage to the Queen Suite, Op. 42
I. Prelude and Opening Scene
II. Dance of the Insects
III. Water
IV. Fire Dance
V. Pas de deux
VI. Finale<
Malcolm Arnold: Rinaldo and Armida, Op. 49
Lento –
Moderato – Andantino – Moderato –
Vivace – Lento – Vivace – Moderato – Lento –
Poco lento (Pas de deux) – Moderato – Allegretto –
Andante con moto – Poco piu mosso – Andante con moto - Moderato -
Lento – Vivace molto – Lento
Malcolm Arnold: Sweeney Todd Concert Suite, Op. 68a
I. Moderato e misterioso – Vivace – Meno mosso
II. Allegretto – Vivace –
III. Vivace – Allegro moderato –
IV. Allegro vivace – Allegro frenetico –
V. Allegretto –
VI. Andante – Allegro – Pas de quatre – Vivace – Moderato – Vivace - Frenetico - Molto meno mosso -
VII. Allegro con brio – Allegretto (Pas de deux) – Piu mosso – Allegretto - Allegro con brio
Malcolm Arnold: Electra, Op. 79
Lento – Vivace – Vivace –
Lento – Allegro ma non troppo – Moderato –
Vivace – Lento