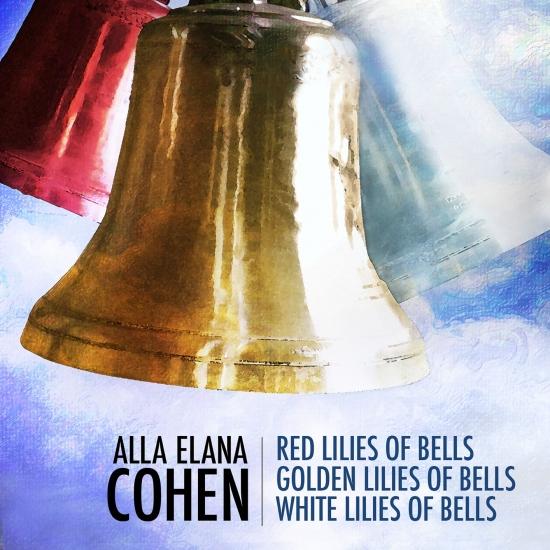 Composer Alla Elana Cohen presents a full album of chamber works in her first Ravello Records release RED LILIES OF BELLS, GOLDEN LILIES OF BELLS, WHITE LILIES OF BELLS. Cohen is an extremely creative and evocative composer, her works are wildly imaginative. The album is rich with musical surprises that reward repeat listens.
The album begins with Inner Temple Vol. 2 Ser. 1 “Brachot” (“Blessings”), a dramatic string quartet in three movements. The first movement begins with gliding lead violin lines before turning more brooding and less fluid, with bursts of sliding chords countered interspersed. A steady pizzicato shapes the second movement, played in turns by two violins and by viola and cello throughout nearly the entire length of the piece.
The final movement is characterized by frenzied violin lines that positively soar. Cohen returns to the Inner Temple theme later in the album with Inner Temple Vol. 1 Ser. 12 “Brachot” and Inner Temple Vol. 1 Ser. 11 “Shabbat Nigunim,” both works for chamber orchestra which continue the spirit of the initial Inner Temple installment.
The mood shifts slightly with the next composition, a triptych for chamber orchestra entitled Homage to Jean Cocteau and Jean Marais. Tension defines the sprawling first movement – both in the notes played and rests. The group’s mallet percussion plays an especially important role in setting the mood, which is as uneasy as it is beautiful.
The second movement gives the listener a chance to catch their breath, featuring the same tense feeling albeit with more sustained chords than the first movement’s breakneck pace. The woodwinds take center stage on the third movement, giving an airy and lighter feel to the otherwise dense piece. Taken as a whole, Homage to Jean Cocteau and Jean Marais is a glorious journey and a true highlight of the entire album.
Next up is the title track suite, Red Lilies of Bells, Golden Lilies of Bells, White Lilies of Bells, presented as a trio for violin, cello and piano. The first movement and third movements are almost entirely spoken word with just the hint of a melody. The second movement of the Trio contains variety of bell-like sonorities, especially in the piano part, with spatters of chords and bursts of sound.
This trio is an outlier among the several larger personnel works on the album, as is the solo cello performance on Hoffmanniana and duet for soprano and viola on Inscriptions on a Bamboo Screen. The interplay between voice and strings on Inscriptions pushes both instruments to soar to higher and higher planes. The composer herself adds cup gong to the proceedings of the last movement, which compliments the percussive, steady plucking of the viola. And though the cello stands alone on Hoffmanniana, its collection of lively bowed and plucked techniques presents an intense display that matches the impact of its neighboring orchestral tracks.
Cohen is to be especially exalted for her work with tension, fluidity, and varying tempos among her dynamic group of compositions presented in this collection.