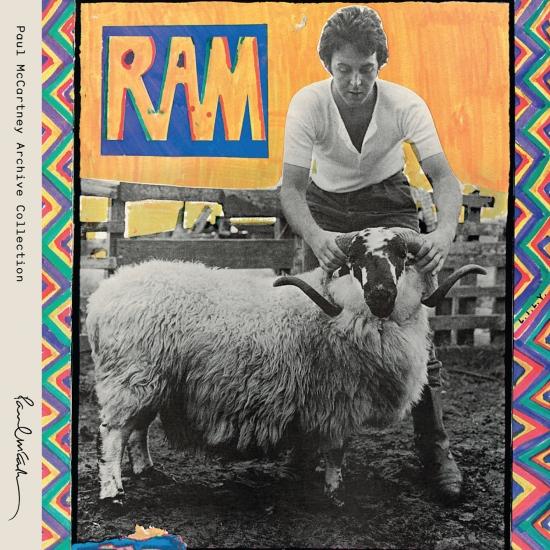 Ram forms one part of the Paul McCartney archive collection, personally supervised by Paul and newly remastered at Abbey Road Studios. Ram, originally released in May of 1971, is the only album to be credited to both Paul and Linda McCartney. The album topped the charts hitting number one in the UK and number two in the US, and also gave Paul his first post-Beatles US number one single with 'Uncle Albert/Admiral Halsey' and a Grammy win for Best Arrangement Accompanying Vocalists.
The only album credited to both Paul and Linda McCartney, RAM reached Number 1 in the UK and stayed in the US Top 10 for five months. Recording after he’d left The Beatles and before the formation of Wings, Paul initially flew with Linda to New York to record the songs they'd written but arrived without a band. As Paul recalls, “We were thinking of forming a group at that time, Wings. We went to New York, found a really grotty little basement somewhere and auditioned a bunch of people. We got someone to throw a lot of drummers at us, out of which we picked Denny Seiwell who’s one of the best, and his personality fitted. Then we went in, worked with him, Hugh McCracken, Dave Spinozza, a couple of New York session men, and did RAM.” To avoid arousing too much interest, the auditions were held under the guise of a session for a commercial jingle. As well as Paul’s lead vocals there are harmonies from Linda. “I gave her a hard time, I must say, but we were pleased with the results. Elton John later said somewhere that he thought it was the best harmonies he’d heard in a long while. It was very much the two of us against the world at that point.” Despite an initially lukewarm Rolling Stone review, it was later hailed by them as one of his best solo albums. In 2012, RAM was reissued in remastered form with many extra elements, as part of the Paul McCartney Archive Collection.
„Lennon loathed it – especially the arresting opening Too Many People, with its mild digs at John and Yoko – and even easy-going Ringo told Melody Maker: 'I don’t think there’s one good tune on that one… He seems to be going strange.'
Despite reaching No. 1 in the UK and No. 2 in the US, Ram received harsh reviews, with Paul perceived as the bread-head who broke up the group. Yet decades on, as is so often the way, the music has triumphed, the antipathy set aside. Now, the cool thing to say is that the 1971 album – McCartney’s second post-Fabs, his last before Wings, and the only one co-billed with Linda – is one of his best. Its stylistic grab-bag makes a highly entertaining spree, punctuated with bursts of true genius. There’s little coherence – it leaps restlessly from grandiose to silly, as is Macca’s way – but the best moments are breathtaking.
The UK single The Back Seat of My Car stalled, astonishingly, at number 39, but it’s a textbook example of why it’s impossible to sneer at this master craftsman for long. Romantic, surging, loaded with melodic twists and dynamic swoops which rip your heart out while smiling innocently, it’s a career pinnacle from a golden, competitive era.
Mr and Mrs McCartney sketched the songs while on a 'get away from it all' holiday in the Mull of Kintyre, and then recorded in New York and L.A. with swiftly recruited musicians. Linda serves as backing vocalist (though she comes to the fore on Long Haired Lady).
Paul’s voice throughout shows uncanny range: although the whole vibe tries to say not-trying-too-hard, he proved a few points to Lennon. There are a couple of R&B plodders (Smile Away, Monkberry Moon Delight), but Heart of the Country is all rustic charm and the brilliant centre-piece (and US single) Uncle Albert/Admiral Halsey is Abbey Road in microcosm.
Ripe for another re-evaluation, this reissue also offers rare/unreleased tracks, Paul’s orchestral version of the album, Thrillington, and that exquisite jewel, Another Day. Slaughtered at birth, Ram has lived on to fight.“ (Chris Roberts, BBC Review)
Paul McCartney, bass, guitars, vocals
Linda McCartney, vocals
Denny Seiwell, drums
Dave Spinozza, guitar
Hugh McCracken, guitar
Sound Engineers: Tim, Ted, Phil, Dixon, Armin & Jim
Mixing Engineer: Eirik the Norwegian
Produced by Paul and Linda McCartney
Digitally remastered