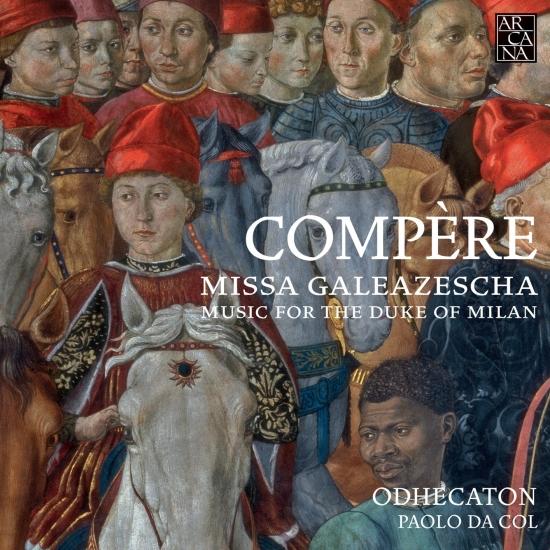 Info for Compère: Missa Galeazescha, Music for the Duke of Milan

During the reign of Duke Galeazzo Maria Sforza (1444-76), Milan experienced an extraordinary musical era. In the 1470s, the Duke set out to form a ‘famous and worthy choir’, recruiting a ‘goodly number of singers from beyond the Alps and from various countries’. He soon assembled a musical ensemble that boasted some of the most celebrated musicians in the Franco-Flemish polyphony of the day, from Italy and beyond.
The Duke brought into being a new kind of polyphonic mass, a cycle of motets called missales to replace the traditional ordinarium, with texts attributing special importance to the worship of Our Lady of Grace and Mercy, much beloved by the Sforza family.
A masterpiece of the genre is the so-called Missa Galeazescha for five voices, composed by Loyset Compère and performed here by an ensemble inspired by the impressive size of Galeazzo Maria Sforza’s cappella. This recording brings together four vocal instrumental groups.
Odhecaton
La Pifarescha
La Reverdie
Ensemble Pian & Forte
Paolo da Col, conductor

Odhecaton
Since its debut in 1998, Odhecaton has won many prestigious prizes for its recordings, reflecting critical recognition of the group’s having pioneered a new interpretative approach to the performance of polyphonic music: a fluid and expressive reading based on textual declamation. The name of the group is taken from the Harmonice Musices Odhecaton, the first printed book of polyphony published in 1501 by Ottaviano Petrucci in Venice. Their core repertoire encompasses the work of Italian, French, Flemish and Spanish composers of the 15thcentury. Directed by Paolo Da Col, Odhecaton brings together some of the best Italian male voices specialized in the performance of Renaissance and baroquemusic. The ensemble has made recordings dedicated to the music of Gombert, Isaac, Josquin, Peñalosa and Compère, and has helped rediscover the repertoire of 17th-century Spanish and Portuguese composers active in the Canary Islands. These programmes have seen Odhecaton being invited to appear in the leading European festivals, and won them important recognition in the world of recording: “Diapason d’or de l’année”, “5 diapasons”,”Choc” (Le Monde de la Musique), “Disco del mese” (Amadeus and CD Classics), and “Cd of the Year” (Goldberg). Beyond its central repertoire, Odhecaton has also presented a semi-staged production of Orazio Vecchi’s Amfiparnaso (directed by Enrico Bonavera, with scenery by Lele Luzzatti), and a production of sacred music by Gesualde da Venosa. Since 2008, Odhecaton has paid particular attention to the music of Palestrina. The group also works occasionally with instrumentalists specialized in their repertoire, including Bruce Dickey and Concerto Palatino, Gabriele Cassone, Liuwe Tamminga, Paolo Pandolfo, Jakob Lindberg and La Reverdie.
Paolo Da Col
singer, organist, conductor and musicologist - studied performance and musicology in Bologna. Since his youth interested in Renaissance and Baroque music, over the last twenty years he has been a member of various Italian vocal groups, including the Cappella di San Petronio of Bologna and Ensemble Istitutioni Harmoniche. Since 1998 he has directed Odhecaton, as well as leading various Baroque vocal and instrumental ensembles. Professor at the conservatorium of Trieste, he runs (with Luigi Ferdinando Tagliavini) the magazine L’Organo, contributes as a music critic to many specialised magazines (including Giornale della Musica), oversees the catalogue of the Bolognese music publisher Arnaldo Forni. He also prepares editions of instrumental music, has compiled a catalogue of musical collections, and has written articles on the history of Renaissance and baroquevocal technique.

Booklet for Compère: Missa Galeazescha, Music for the Duke of Milan