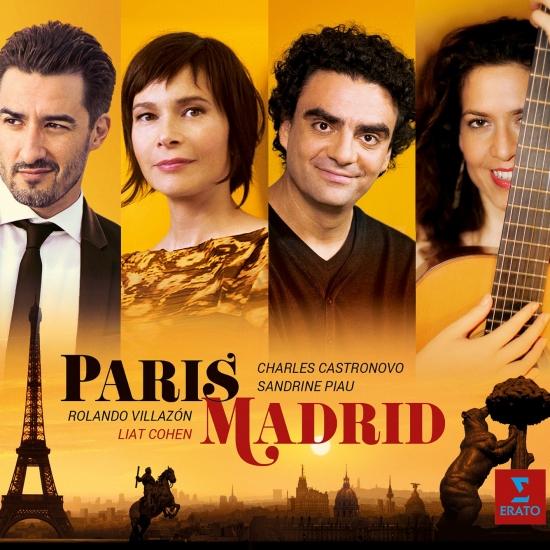 New classical/folk crossover album from the Franco-Israeli classical guitarist Liat Cohen, featuring Rolando Villazón, Sandrine Piau, Charles Castronovo including a transcription for voice of the Rodrigo Concierto de Aranjuez.
Exploring the rich tradition of cultural exchange between France and Spain, Paris-based guitarist Liat Cohen teams up for Paris-Madrid with three celebrated singers: soprano Sandrine Piau and tenors Rolando Villazón and Charles Castronovo.
Paris-Madrid follows the Brazilian-themed album Rio-Paris, released in 2014, for which Cohen was joined by Natalie Dessay, Agnès Jaoui and Helena Noguerra. France shares more than 600 km of border with Spain and the neighbouring countries enjoyed a particular mutual fascination in the late 19th century and early 20th century. When it comes to music, just think of Bizet’s Carmen, premiered in 1875, the Hispanic-themed works of Debussy and Ravel, or the importance of Paris in the lives and artistic development of such Spanish composers as Granados and Falla.
Composers representing the French side of the equation are Massenet, Ravel and the lesser-known Gabriel Dupont, who studied with Massenet and died of tuberculosis at the age of 36. Among the Spanish contingent are Tárrega (whose Recuerdos de la Alhambra is one of the best-known of all pieces for guitar), Sor, Albéniz, Falla (the Siete canciones populares españolas), Granados (Tonadillas en estilo antiguo, which include songs inspired by the paintings of Goya), and Rodrigo. Rodrigo, who died in 1999, is represented by three songs and by ‘Aranjuez mi amor’, a newly-conceived vocal number based on the haunting Adagio that forms the central movement of his much-loved Concierto de Aranjuez. The arrangement, by Boaz Ben-Moshe, is for two guitars (Liat Cohen is joined by Gil Waysborth) and the singers are Sandrine Piau and Charles Castronovo.
Liat Cohen, who was born in Tel Aviv, but trained in Paris, is admired in classical and contemporary repertoire and has also explored the music of Ladino-speaking Sephardi Jews, whose origins lie in Spain and Portugal. The French soprano Sandrine Piau first built her reputation in Baroque music, but also excels in French and German song and in opera, ranging from Handel and Mozart to Debussy, Poulenc and Britten. New York-born Charles Castronovo is a leading lyric tenor, a regular guest in major opera houses in such roles as Rodolfo (La bohème), Edgardo (Lucia di Lammermoor), Alfredo (La traviata) and Don José (Carmen). Rolando Villazón, one of the best-known names in opera today, holds a firm place in the Erato catalogue in repertoire that ranges from Monteverdi to Wagner and includes his signature role, Nemorino in L’elisir d’amore, recorded for DVD at the Vienna State Opera.
Liat Cohen, guitar (tracks 1-29)
Charles Castronovo, tenor (tracks 1, 3-6, 8-14, 16-19, 24-27)
Sandrine Piau, soprano (tracks 1, 15-16, 18-19, 21-23)
Rolando Villazon, tenor (tracks 6, 18-19)
Gil Waysborth, guitar (track 1) 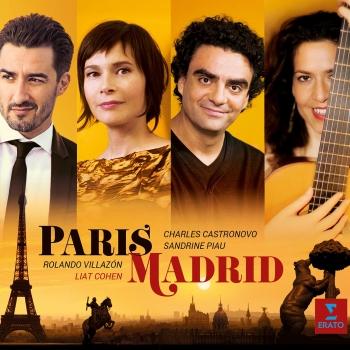