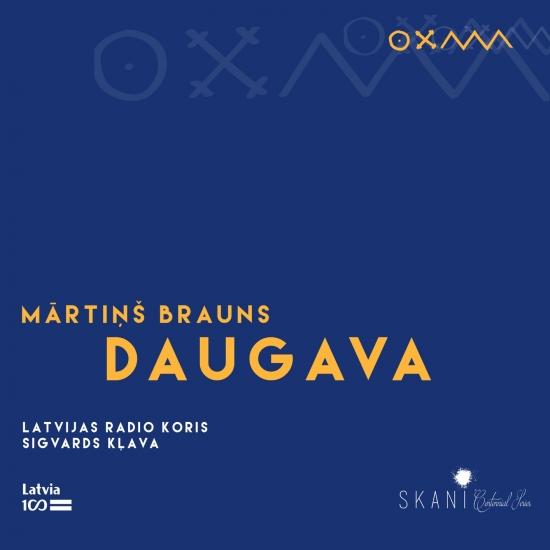 World premiere recording by Latvian Radio Choir, conductor Sigvards Klava and author Martinš Brauns at the keyboard and vocals is dedicated to the centenary of Latvian State and the Song and Dance festival tradition that is at the core of Latvian cultural identity. Every 4 years, the mass choire of approx. 35 000 singers gathers at the Meaparks Grand Bandstand in Riga to perform at a mass concert. Saule, Prkons, Daugava - the final track of this album - has been firmly cemented in the core repertoire of the festival.
Daugava by poet Rainis and composer Martinš Brauns has great cultural and historical value. The work is closely linked with the birth of the Latvian state in the early 20th century as well as with the country's path towards the restoration of its independence at the end of the 20th century.
'Sun, Thunder, Daugava' - the high point of the poem - has experienced a tremendous wave of popularity. As Rainis had 'cried out' his Daugava against the slaughter of the nation, so Brauns replayed this drama, now as part of a new arc of development, against the loss of the nation's identity.
Almost four decades later, this melody, set to the poem 'Ara és l'hora' (Now is the time) by Miquel Martí i Pol, was adopted as the anthem of the Catalonian independence movement. It could be argued that Brauns called together a genuine song festival in Barcelona on September 11, 2014, when he accompanied a mass of 40,000 people singing the song in the city's streets.
Latvian Radio Choir with it's regular appearances in the worlds most prestigious concert halls, festivals and concert series, as well as well received albums for Ondine, Hyperion Records, Deutsche Grammophon, ECM, BIS and Naïve and SKANI labels has become one of the world's leading choirs.
'There is, in fact, something extraordinary about Latvian choirs: they sing as though their very lives depend on it, and when they are singing Latvian music their immediate connection with the language makes this even more apparent. There is both Nordic clarity and Slavic profundity to be heard in the sound of a Latvian choir, and there is also what I might call a poetic sense, an instinctive knowledge of how to phrase. ' (Gramophone)
Latvian Radio Choir
Sigvards Kļava, conductor