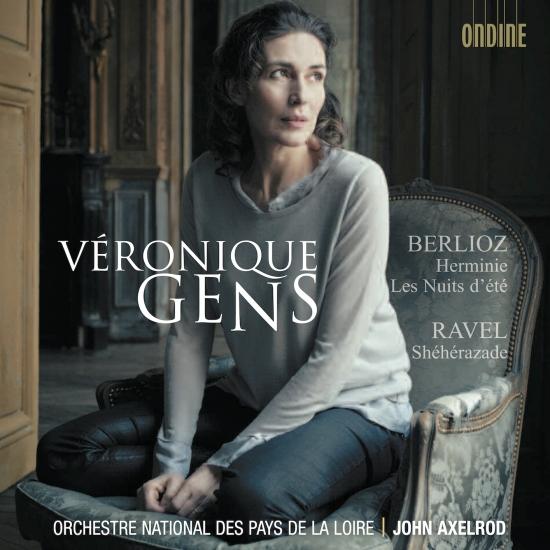 Ondine is delighted to announce a new release from star soprano Véronique Gens, who performs Herminie and Les Nuits d’été by Hector Berlioz and Shéhérazade by Maurice Ravel with the Orchestre National des Pays de la Loire under the baton of their music director John Axelrod. Véronique Gens is recognised internationally as one of the great sopranos working today. She has forged her career in the baroque repertory and the music of Mozart, but French repertoire, especially Berlioz and Ravel, are “as natural to her as the air that she breathes”. Her French remains a model of immaculate diction, both fluid and luminous.
Véronique Gens has a very special relationship to Berlioz’s Les Nuits d’été and Herminie, and here combines them on this album with Shéhérazade by Ravel, which conjures up a totally different world. The charismatic conductor John Axelrod was appointed music director of the Orchestre National des Pays de la Loire in 2009, and follows the philosophy of being “open to the world” with his extraordinarily diverse repertoire choices and innovative programming. He is sought after across the world both for concerts and opera.
'Véronique Gens has recorded Les Nuits d'Eté before, in 2001 for Virgin Classics, as part of an all-Berlioz disc alongside the early scena, La Mort de Cléopatre. The wonderful poise and clarity of that performance invited comparisons with what is generally regarded as the greatest of all versions of Berlioz's song cycle, by Régine Crespin. In returning to the work, Gens pushes that parallel even farther by pairing it with Ravel's Shéhérazade, exactly as on Crespin's original LP.
As you might expect, Gens's singing has sharpened its musical perceptions still further and acquired even more shades of colour since that earlier recording. No one today delivers French song with the combination of tonal beauty and verbal nuance she does, and each number of Nuits d'Eté offers a miniature masterclass, whether it's in the joyous buoyancy that she brings to the opening Villanelle, the sensuousness wrapped around the phrases of Sur les Lagunes or the hint of mysterious smokiness that invades her tone for Au Cimetière.
With the Angers-based orchestra that he took over last year, John Axelrod provides wonderfully supple, attentive support. His players are equally impressive, whether conjuring up the hazy, suggestive backdrops to the gorgeous velvety sheen of Gens's voice in Ravel's Klingsor settings, or the more classically correct accompaniment to Herminie, Berlioz's second unsuccessful attempt to win the prestigious Prix de Rome, for which Gens's experience as a Gluck singer is the perfect pedigree. The disc's only blemish is a curious one: two-thirds of the way through Sur les Lagunes, the voice suddenly recedes, as if Gens has moved farther from the microphone. It's a passing blip, though; everything else is pure ravishment.' (Andrew Clements, The Guardian)
Véronique Gens, soprano
Orchestre National des Pays de la Loire
John Axelrod, conductor
Recorded at Auditorium 2000, Nantes, France (2009-09-25&2010-10-26_2010-) 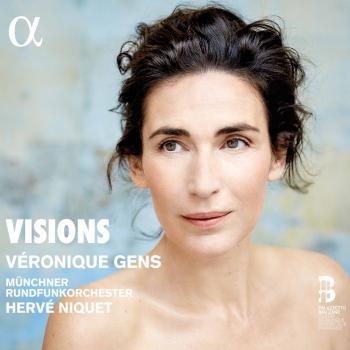 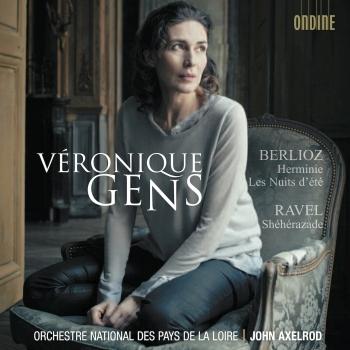 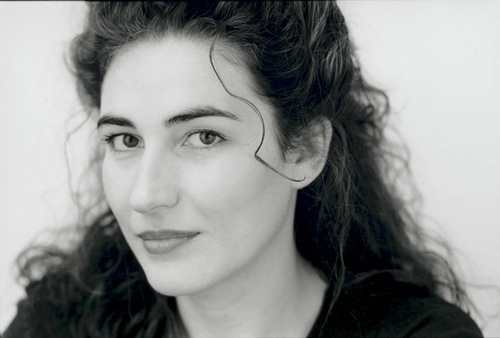 Véronique Gens
A prominent Baroque performer in recent years, soprano Véronique Gens has also become recognized as one of the word’s finest Mozart singers.
She performed Don Giovanni in Barcelona, Madrid, Glyndebourne, Munich and Vienna, Clemenza di Tito in Dresden and Barcelona, Cosí fan tutte in Tokyo and Baden-Baden, Cavalli’s La Calisto in Munich, Paris and London, Pelléas et Mélisande at the Deutsche Oper Berlin, Gluck’s Alceste in Aix- en-Provence, La finta giardiniera at the Salzburg Festival, Martin y Soler’s Il burbero di buon cuore at the Teatro Real Madrid, Rameau’s Castor et Pollux at the De Nederlandse Opera Amsterdam, Iphigénie en Aulide at the Théâtre Royal de la Monnaie and in Amsterdam, Iphigénie en Tauride at the Theater an der Wien, Niobe in London and Luxemburg, La veuve joyeuse in Lyon (available on DVD), Alice in Falstaff at the Baden-Baden Festival and in Nantes, Eva in a new production of Die Meistersinger von Nürnberg at the Liceu in Barcelona and others.
Her future projects include Don Giovanni in Vienna, London and Paris, Cosí fan tutte in Baden-Baden, Iphigénie en Aulide in Amsterdam, Il burbero di buon cuore in Barcelona, Alceste and Cosí fan tutte in Vienna, Falstaff in Munich, La clemenza di Tito in Brussels and Vienna, Dialogues des carmélites at the Théâtre des Champs-Elysées, Der Freischütz at Staatsoper Berlin, Iphigénie en Tauride at the Theater an der Wien and numerous concerts and recitals.
In 2006, Véronique Gens was nominated “Chevalier” by “L’Ordre des Arts et des Lettres” and she has just been appointed “Chevalier” by the renowned “Légion d’honneur” in January 2011.
 Orchestre National des Pays de la Loire
In September 1971, the Philharmonic Orchestra of Pays de la Loire gave its first concerts in Nantes and Angers under the baton of Pierre Dervaux. Created on the initiative of Marcel Landowski, music director at the Ministry for the Arts, this orchestra was founded when the Nantes Opera Orchestra and the Popular Concerts Society Orchestra of Angers were combined to form a single ensemble. Since its foundation, the orchestra has thus been based in two cities, with half of its one hundred musicians in Angers and half in Nantes. Pierre Dervaux became the first music director and immediately gave it a “French colour”. Marc Soustrot, who succeeded him from 1976 to 1994, continued this orientation. The Dutch conductor Hubert Soudant, music director from 1994 to 2004, took the orchestra in new directions, stressing Viennese repertoire and increasing its audience. The orchestra became “national” in 1996. The Brazilian conductor Isaac Karabtchevsky became the fourth music director in 2004, also founding an amateur chorus and emphasising late 19th- and early 20th-century 11 repertoire.
The American conductor John Axelrod was appointed music director of the Orchestre National des Pays de la Loire in April 2009. His tenure has been characterised by the philosophy “open to the world”.
Today, with more than 10,000 subscribers and 200 concerts attracting nearly 200,000 listeners every year, the Orchestre National des Pays de la Loire has one of the largest audiences among European orchestras. It receives financial support from the Pays de la Loire’s Regional Council, the Ministry for the Arts, the town councils of Nantes and Angers and departments of the Pays de la Loire region (Loire-Atlantique, Maine-et-Loire, Vendée).
 John Axelrod
With an extraordinarily diverse repertoire, innovative programming and charismatic performance style, John Axelrod continues to increase his profile as one of today’s leading conductors and is sought after by orchestras throughout the world. After a successful five-year tenure as Music Director and Chief Conductor of the Lucerne Symphony Orchestra and Theatre, and the election as Music Director of the l’Orchestre National des Pays de la Loire (ONPL), in April 2011, John Axelrod was appointed Principal Conductor of Orchestra Sinfonica di Milano “Giuseppe Verdi”.
Since 2000, John Axelrod has conducted over 130 orchestras, most of which include multiple repeat engagements, emphasizing both his success and European credibility in the core classical 12 repertoire. Such prestigious European orchestras include the Berlin’s Rundfunk-Sinfonieorchester, NDR Hamburg Symphony, Gürzenich-Orchester Köln, Leipzig Gewandhaus Orchestra, Orchestre de Paris, Orchestre National de Lyon, Royal Philharmonic of London, London Philharmonic, Accademia Nazionale di Santa Cecilia Orchestra, Orchestra Sinfonica Nazionale della RAI of Turin, Orchestra Sinfonica di Milano “Giuseppe Verdi”, Orchestra del Teatro La Fenice of Venice, Royal Stockholm Philharmonic, Oslo Philharmonic, Swedish Radio Orchestra, Radio Symphonie Orchester in Vienna, Salzburg Mozarteum, Sinfonia Varsovia, among many others. His international profile as guest conductor in the U.S. and Asia features engagements with the Washington National Symphony, Los Angeles Philharmonic, Philadelphia Orchestra, Chicago Symphony, NHKSO Tokyo, Shanghai Symphony... His opera activity includes the premiere performances of Bernstein’s Candide directed by Robert Carsen at Théâtre du Châtelet in Paris and Teatro alla Scala in Milan, Wagner’s Tristan and Isolde  for Angers/Nantes Opéra and the new production of Krenek’s Kehraus um St. Stephan at the Bregenz Festspiele. In past seasons at the Luzern Theatre he conducted new productions of Kaiser von Atlantis, Rigoletto, Rake’s Progress, Don Giovanni, The Three Penny Opera and Idomeneo all for the Lucerne Festival, and Il barbiere di Siviglia, Evgenij Onegin, L’elisir d’amore and Falstaff.
John Axelrod records for SonyClassical, Warner Classics, Ondine, Naïve, Kairos, among others.