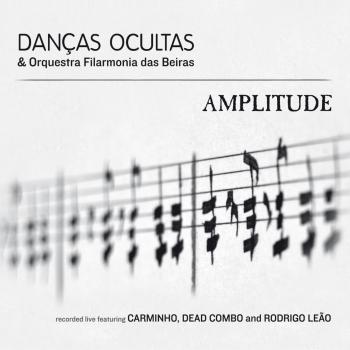 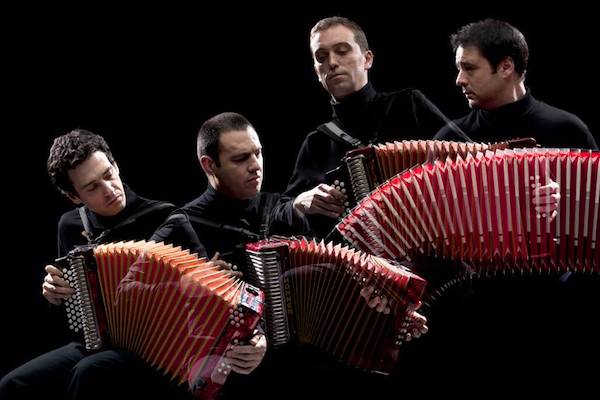 Danças Ocultas
The diatonic accordion (named as ‘concertina’ in Portugal) is an instrument created in the first half of XIX century, later worked to perfection, by several European instrument makers and today it echoes memories coming from a different musical ambience: a time before the record and the radio inventions. But it continues being a ‘dream machine’ ready to invent possible futures and making senses.
In May 1989, Artur Fernandes, Filipe Cal, Filipe Ricardo and Francisco Miguel had a dream to look for and worked their musical performance skills meanwhile they studied the possibilities of taking this instrument away from folklore music ways, accepting what then was known as ” the concertina will”, but writing a new music for it. This was the time that led the band to its name and to its first record, Danças Ocultas (1996), with a repertory on which predominate Artur Fernandes compositions.
After that, came a adventuring time, less ingenuous and more artistic, resulting from the continuous contacts with other performers, from experiences on stage, from the first travels and partnerships, motivating the change of the group into a sharing creativity nucleus and leading to the recording of “Ar” the second record which affirms the beginning of a self musical grammar and shows some technical innovations like the use of a specially built “bass concertina”.
Since then the band has been experiencing the links between that musical grammar and a more universal and trans-cultural view of the musical phenomenon as well as the contemporaneous cultural ways. This concept allowed the band to often perform within scenic arts, namely in Paulo Ribeiro choreographies for which the band composed original music, as well as the repertoire of Pulsar, its third record, Pulsar (2004), after which all the compositions and musical arrangements start to be signed collectively. Sound, rhythm and harmony games between the past and the future, making sense, in a dialog with contemporary aesthetic.
In October 2009, a new work was published: Its name is Tarab, an arabic word meaning a state of elevation, celebration and spiritual communion that is struck both by the performer and by the listener during a well done musical act. Tarab is ecstasy. Tarab is the goal of music as well as of those who practice it. Tarab notes now the refocusing of the group, a dynamic reinterpretation of their common path and a new affirmation of music as a universal language of brotherhood.