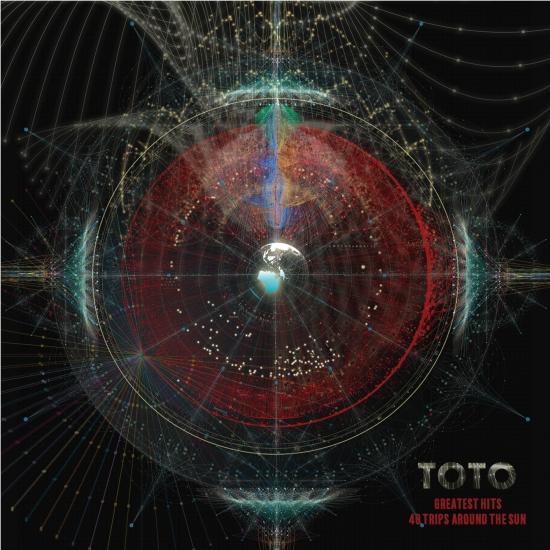 Info for Greatest Hits: 40 Trips Around The Sun

The 17 track album features three previously unreleased recordings: "Spanish Sea" "Alone" and "Struck By Lightning" alongside newly remastered classic tracks worked on by Elliot Scheiner & Gavin Lurssen and his team. The core Toto members, Steve Lukather, David Paich, Steve Porcaro, Joseph Williams re-entered the studio earlier this year to work on this release.
“Myself, David, Steve and Joseph are humbled and thrilled at the long lasting success of the band,” Steve Lukather remarked. “This 40th Anniversary tour is going to be a special one for us and all of the fans that come out. On top of all that, it’s really exciting to be working with Sony Music again. We’ve spent a lot of time this year working on new music and re-mastering the older tracks.”
Few ensembles in the history of recorded music have individually or collectively had a larger imprint on pop culture than the members of TOTO. As individuals, the band members can be heard on an astonishing 5000 albums that together amass a sales history of a half a billion albums. Amongst these recordings, NARAS applauded the performances with more than 200 Grammy nominations.
With close to 40 years together and literally thousands of credits, including the biggest selling album of all time: Michael Jackson’s Thriller, and accolades to their names, TOTO remains one of the top selling touring and recording acts in the world. They are the benchmark by which many artists base their sound and production, and they continue to transcend the standards set by the entire music community, being simply synonymous with musical credibility. Their repertoire continues to be current via high profile usage on broadcast television. They are pop culture, and are one of the few 70’s bands that have endured the changing trends and styles to a career enjoy a multi-generational worldwide fan base.
Steve Lukather: "The 40 trips around the sun tour will be like the history of Toto tour with film and all... and we are going to play stuff of every record... REALLY trying to do some stuff we have never done live and we will come back and do a 'fan request of deep suits' in a few months to get YOUR input and ideas.
Obviously we can play all 250 of our songs in one night and with a huge production we plan on bringing next year... it has to be more rehearsed to work. There will be some jamming and we dont fake it up there cause... not one is coming see how my ass looks in the jeans ya know, hahaha. I was also in an tour bus accident last year that fucked my left shoulder and I live in 24 hour pain and NO operation can help me. I have been to 5 specialists in LA etc... I cant risk losing my left hand with a botched operation! I can play... assuming you ever thought I could, hahaha... but I am playing less and with more taste then ever as I just CANT 'shred' as the muscles wont allow it... and really... I play better when I think less, play a little less and just enjoy the night.
BUT the good news is that the speed wars are over. I am NOT in competition with anyone. There is a 5 year old kid that plays faster than anyone but cant play in time with a band, hahaha. I am becoming a more mature player and the accident has caused me to play more methodically rather than default 'fast lick' due to whatever reason... There are a million guys better than me and that is REALLY ok with me!!! I have a 40 year career and I am most grateful for that! I am a fan of great guitar players too. I am just grateful to still be able to play and tour and make music with my brothers. Things are going great and we are having fun. Thank you'll for the support and I hope this clears any bullshit up. Thanks for listening. Your friend Luke."
Steve Lukather: "To avoid any misunderstandings: the '40 Trips' record in January is OUR remastered hits + new songs.
The box-set will have all the 9 new tracks + the old tracks (remastered right from the original tapes) of our Sony records + A LOT of surprises!"
TOTO
Digitally remastered