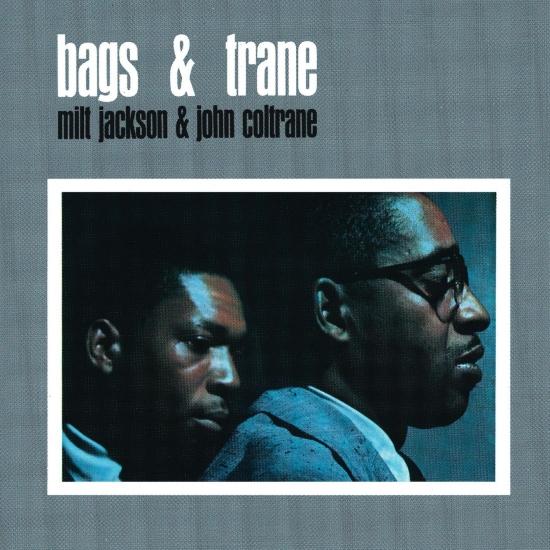 As John Coltrane moved from music rich in chordal complexity to a newer, freer form of modality--in which melodic and rhythmic freedom came to the fore--some critics couldn't make the imaginative leap. But no one could ever question Coltrane's superb musicianship. This all-star session isn't merely an aesthetic bone to these critics, but a superb example of two masters blowing relaxed and free over a tight, intuitive rhythm section. There's Jackson's Modern Jazz Quartet collaborator Connie Kay on drums, master of understated swing; the elegant, eternally tasteful Hank Jones on piano; and Mr. P.C., Paul Chambers, one of the fathers of modern bass playing.
Milt "Bags" Jackson and Coltrane play together with such easy, intuitive grace, it's hard to believe that BAGS AND TRANE is not a working band. The title tune is a wistful, engaging blues that passes its vamping, melodic figure around between vibes, piano and tenor sax. Jackson's funky variations over Chambers and Kay's leisurely beat is in perfect contrast to Trane's remarkably laid-back solo, whereas "Three Little Words" is given a crisply swinging treatment--Trane's blues cry is galvanizing and Jackson answers with rich harmonic variations.
Jones' captivating intro sets the tone for a tender reading of "The Night We Called It A Day," on which Trane follows Jackson's supple solo with yearning, concise phrases. A brisk rundown of Dizzy Gillespie's "Be-Bop" provides an equestrian set of changes worthy of these master players, and after a brisk romp by the vibraphonist, Trane is off to the races; then, following some terse harmonic juggling by Jones, Bags and Trane take things out with dueling eights. In closing, the tick-tock beat of "The Late Late Blues" sends everyone home swinging.
John Coltrane, tenor saxophone
Milt Jackson, vibraphone
Hank Jones, piano
Paul Chambers, bass
Connie Kay, drums
Produced by Nesuhi Ertegun
Digitally remastered 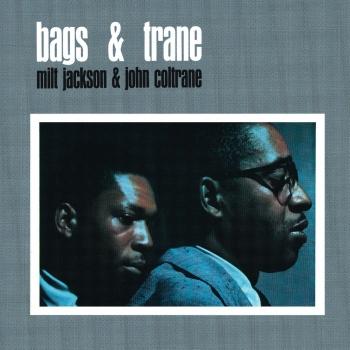 Milt Jackson
Before Milt Jackson, there were only two major vibraphonists: Lionel Hampton and Red Norvo. Jackson soon surpassed both of them in significance and, despite the rise of other players (including Bobby Hutcherson and Gary Burton), still won the popularity polls throughout the decades. Jackson (or 'Bags' as he was long called) was at the top of his field for 50 years, playing bop, blues, and ballads with equal skill and sensitivity.
Milt Jackson started on guitar when he was seven, and piano at 11; a few years later, he switched to vibes. He actually made his professional debut singing in a touring gospel quartet. After Dizzy Gillespie discovered him playing in Detroit, he offered him a job with his sextet and (shortly after) his innovative big band (1946). Jackson recorded with Gillespie, and was soon in great demand. During 1948-1949, he worked with Charlie Parker, Thelonious Monk, Howard McGhee, and the Woody Herman Orchestra. After playing with Gillespie's sextet (1950-1952), which at one point included John Coltrane, Jackson recorded with a quartet comprised of John Lewis, Percy Heath, and Kenny Clarke (1952), which soon became a regular group called the Modern Jazz Quartet. Although he recorded regularly as a leader (including dates in the 1950s with Miles Davis and/or Thelonious Monk, Coleman Hawkins, John Coltrane, and Ray Charles), Milt Jackson stayed with the MJQ through 1974, becoming an indispensable part of their sound. By the mid-'50s, Lewis became the musical director and some felt that Bags was restricted by the format, but it actually served him well, giving him some challenging settings. And he always had an opportunity to jam on some blues numbers, including his 'Bags' Groove.' However, in 1974, Jackson felt frustrated by the MJQ (particularly financially) and broke up the group. He recorded frequently for Pablo in many all-star settings in the 1970s, and after a seven-year vacation, the MJQ came back in 1981. In addition to the MJQ recordings, Milt Jackson cut records as a leader throughout his career for many labels including Savoy, Blue Note (1952), Prestige, Atlantic, United Artists, Impulse, Riverside, Limelight, Verve, CTI, Pablo, Music Masters, and Qwest. He died of liver cancer on October 9, 1999, at the age of 76. (Scott Yanow)
John Coltrane
Born September 23, 1926 in Hamlet, North Carolina, John Coltrane was always surrounded by music. His father played several instruments sparking Coltrane’s study of E-flat horn and clarinet. While in high school, Coltrane’s musical influences shifted to the likes of Lester Young and Johnny Hodges prompting him to switch to alto saxophone. He continued his musical training in Philadelphia at Granoff Studios and the Ornstein School of Music. He was called to military service during WWII, where he performed in the U.S. Navy Band in Hawaii.
After the war, Coltrane began playing tenor saxophone with the Eddie 'CleanHead' Vinson Band, and was later quoted as saying, 'A wider area of listening opened up for me. There were many things that people like Hawk, and Ben and Tab Smith were doing in the ‘40’s that I didn’t understand, but that I felt emotionally.' Prior to joining the Dizzy Gillespie band, Coltrane performed with Jimmy Heath where his passion for experimentation began to take shape. However, it was his work with the Miles Davis Quintet in 1958 that would lead to his own musical evolution. ' Miles music gave me plenty of freedom,' he once said. During that period, he became known for using the three-on-one chord approach, and what has been called the ‘sheets of sound,’ a method of playing multiple notes at one time.
By 1960 Coltrane had formed his own quartet which included pianist McCoy Tyner, drummer Elvin Jones, and bassist Jimmy Garrison. Eventually adding players like Eric Dolphy, and Pharoah Sanders. The John Coltrane Quartet created some of the most innovative and expressive music in Jazz history including the hit albums: 'My Favorite Things,' 'Africa Brass,' ' Impressions,' ' Giant Steps,' and his monumental work 'A Love Supreme' which attests to the power, glory, love, and greatness of God. Coltrane felt we must all make a conscious effort to effect positive change in the world, and that his music was an instrument to create positive thought patterns in the minds of people.
In 1967, liver disease took Coltrane’s life leaving many to wonder what might have been. Yet decades after his departure his music can be heard in motion pictures, on television and radio. Recent film projects that have made references to Coltrane’s artistry in dialogue or musical compositions include, 'Mr. Holland’s Opus', 'The General’s Daughter', 'Malcolm X', 'Mo Better Blues', 'Jerry McGuire', 'White Night', 'The Last Graduation', 'Come Unto Thee', 'Eyes On The Prize II' and 'Four Little Girls'. Also, popular television series such as 'NYPD Blue', 'The Cosby Show', 'Day’s Of Our Lives', 'Crime Stories' and 'ER', have also relied on the beautiful melodies of this distinguished saxophonist.
In 1972, 'A Love Supreme' was certified gold by the RIAA for exceeding 500,000 units in Japan. This jazz classic and the classic album 'My Favorite Things' were certified gold in the United States in 2001.
In 1982, the RIAA posthumously awarded John Coltrane a Grammy Award of ' Best Jazz Solo Performance' for the work on his album, 'Bye Bye Blackbird'. In 1997 he received the organizations highest honor, the Lifetime Achievement Award.
On June 18, 1993 Mrs. Alice Coltrane received an invitation to The White House from former President and Mrs. Clinton, in appreciation of John Coltrane’s historical appearance at the Newport Jazz Festival.
In 1995, John Coltrane was honored by the United States Postal Service with a commemorative postage stamp. Issued as part of the musicians and composers series, this collectors item remains in circulation.
In 1999, Universal Studios and its recording division MCA Records recognized John Coltrane’s influence on cinema by naming a street on the Universal Studios lot in his honor.
In 2001, The NEA and the RIAA released 360 songs of the Century . Among them was John Coltrane’s 'My Favorite Things.' (Source: www.johncoltrane.com)