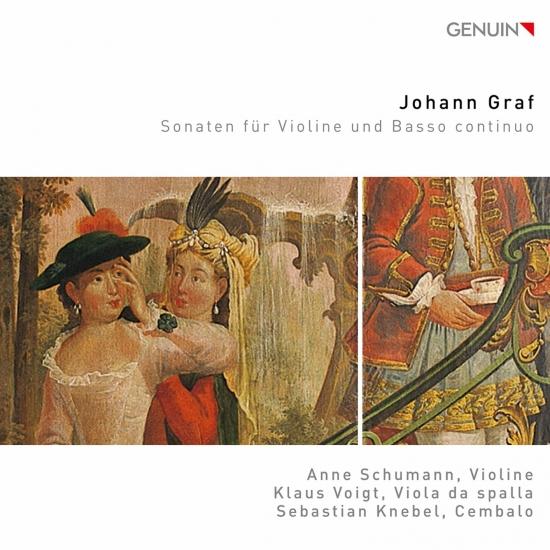 Johann Graf's life dates are almost identical to those of Johann Sebastian Bach. The Rudolstadt court Kapellmeister was one of the most esteemed violinists of his time. Violinist Anne Schumann, violist Klaus Voigt, and harpsichordist Sebastian Knebel are now releasing a CD on GENUIN featuring his violin sonatas, which, although significant in music history, have rarely been performed. The works include passionate and virtuosic music in the Italian style, to which Klaus Voigt, in particular, gives a striking coloration: He supports the swinging and clear violin playing of Anne Schumann with the viola da spalla, a kind of small cello held with a strap in front of the belly.
Anne Schumann, violin Klaus Voigt, viola da Spalla Sebastian Knebel, harpsichord 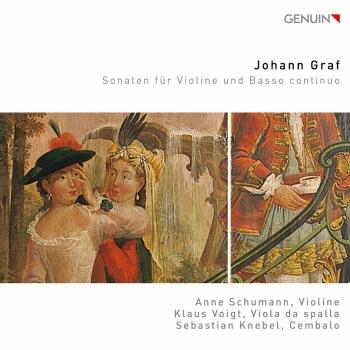 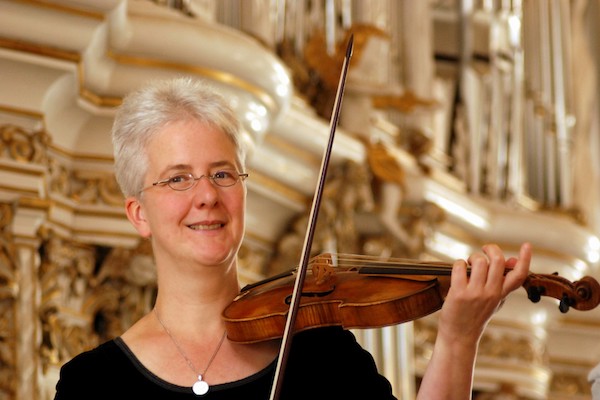 Anne Schumann
After completing music degree programs in Weimar and Dresden, Anne Schumann began her concert career in 1989 as a violinist in the Leipzig Gewandhaus Orchestra. As a freelance musician, she first gained a foothold in England in 1993, where she still performs regularly with Sir John Eliot Gardiner, among others.
Meanwhile, her musical life is characterized by great diversity. She is particularly interested in forgotten compositions also for viola as well as viola d’amore.
In 2019 Anne Schumann was honored with the Fasch Prize of the City of Zerbst.
“While still a child, the viola d’amore had piqued my curiosity long before I knew what beautiful tones can be called forth from the gut strings of a Baroque violin. After being raised in a very musical household, I studied the modern violin at the state music conservatories in Weimar and Dresden.
The dream of one day playing the viola d’amore was no longer as strongly present at the time, but re-emerged after I finished my studies. I was happy about my work as a member of the Gewandhausorchester Leipzig and, in addition to my work there, I intensively studied the range of tonal colors and new possibilities for articulation on my Baroque violin.
Ultimately this music and especially the engaging manner in which it was interpreted would not let me go and I left the orchestra in order to have more free rein for my own ideas. Concert engagements in, among other countries, England and France as well as working with my ensemble in Leipzig, the Chursächsische Capelle Leipzig, fully occupy my days as a Baroque violinist. My repertoire expanded very quickly to include works for the viola and, as I had always desired, for the viola d’amore.”
Klaus Voigt
studied modern viola at the University of Music Franz Liszt Weimar. Since 1995 he has focused exclusively on historical instruments.
Participation in courses given by Marianne Kubitschek inspired him to search for new works for viola d’amore and to more intensively explore performance of this repertoire. He began transcribing early manuscripts into modern notation. During this process he not only deciphered the tablature notation of composers but also devised new tablature notations for works in common notation which makes reading the music easier for the viola d’amore player.
In 2001 he was co-founder of the Telemannisches Collegium Michaelstein. In addition to the baroque viola, he plays viola d’amore and, since 2012, viola da spalla—a small 18th-century cello held across the player’s chest suspended by a strap over the shoulder [spalla, shoulder].
Sebastian Knebel
From apprentice craftsman (organ builder) to being high in demand as a specialist in the organ and harpsichord literature of the 17th and 18th centuries from Central Germany—this is how Sebastian Knebel’s career can be summarized. Sebastian Knebel’s many appearances as a recital and concert soloist have established his name as a harpsichordist, organist, and pianoforte player.
He is organist and harpsichordist of Collegium Marianum Prague, Cappella Sagittariana Dresden and with the Telemannisches Collegium Michaelstein.