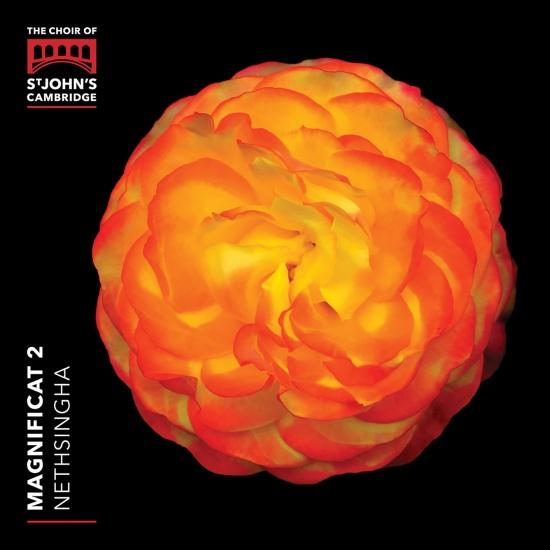 Andrew Nethsingha and The Choir of St John’s College, Cambridge release the second volume in the highly praised ‘Magnificat’ series, presenting nine settings of the Evening Canticles by celebrated Organist-Composers, written between 1932 and 1952 and non-church musicians from 1974-1989.
The recording culminates with a contemporary setting by Julian Anderson, composed for the Chapel’s 150th Anniversary and commissioned for the College Choir.
The nine settings of Magnificat and Nunc Dimittis featured on Magnificat 2 fall into two groups - four by celebrated Organist-Composers, written between 1932 and 1952, and four by non-church musicians from 1974-1989. The recording culminates with a contemporary setting by Julian Anderson, composed for the 150th anniversary of St John’s Chapel, a neat follow-on from the previous album’s final track of canticles by Michael Tippett, commissioned for the College’s 450th anniversary.
The aim of the recording is to compare the varied ways in which composers have created musical form out of these timeless texts, and Andrew Nethsingha has selected these choices due to a variety of links between them. These include notable clergymen-commissioners of the mid-twentieth century; Christ Church, Oxford as the place Walton was chorister, Watson was Organist and for which Swayne composed Magnificat I; and French influences for both the works by Berkeley and Anderson.
This album follows the first volume of Magnificat and Nunc Dimittis settings, titled simply Magnificat, released in 2019. This first volume was given five stars by Choir & Organ, and The Observer called it ‘inventive and brilliant’. The two volumes are designed to compliment one another, with the first in the series starting earlier (Stanford, 1880s) and the second bringing the listener up to the present day. Volume One was ‘Editor’s Choice’ in Gramophone.
"These first volumes are designed to complement one another. ‘Magnificat 1’ started earlier, with Stanford in the 1880s; Volume Two brings us briefly up to the present day. The first release contained celebrated works by Tippett and Leighton from 1961 and 1972 respectively, in between the two main periods represented on this album.
Both albums contain iconic works by Howells, written a year apart. We hear composers creating different orders of priority for the parameters of composition.” (Andrew Nethsingha)
"The introductory essay by former Archbishop of Canterbury, Dr Rowan Williams, speaks of “these ancient hymns, so redolent of continuities yet so full of radical surprise,” words true both of the canticles and of this absorbing treasury, impeccably performed by St John’s College Cambridge Choir under the direction of Andrew Nethsinga" (Daniel Harding, Music Matters)
Glen Dempsey, organ
James Anderson-Besant, organ
Choir of St John's College Cambridge
Andrew Nethsingha, director