All About That Basie The Count Basie Orchestra 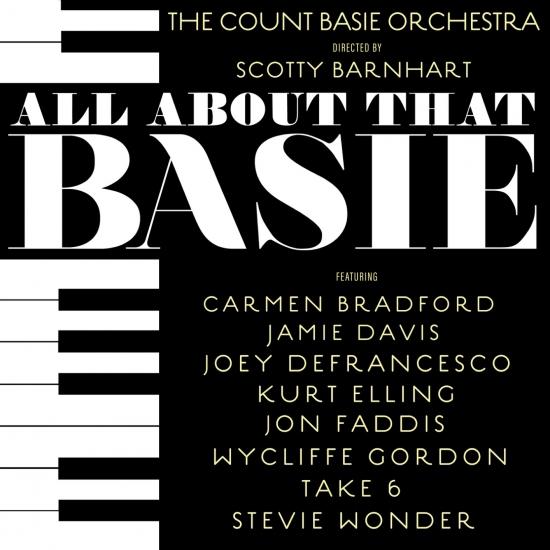 Info for All About That Basie

A gathering of legendary artists have come together to join the Count Basie Orchestra under the direction of Scotty Barnhart for this historic release celebrating the iconic band from its earliest years, throughout the decades with Sinatra and Ella, and through to today’s contemporary artists.
All About that Basie is set for a September 14, 2018 release via Concord Jazz. The album was produced by eight-time Grammy award winning producer and former Basie drummer Gregg Field. Field notes that common throughout the entire album is that great Basie sound. “Basie’s band throughout the years was able to successfully cover hits of the era with their sound and as part of the new album we have continued that tradition including hits from legends like Stevie Wonder and Leonard Cohen as well artists as contemporary as Adele,” Field said.
To help accomplish that mission, Barnhart and Field put together an amazing array of guest talent that includes multi-Grammy winning jazz vocal group Take 6, jazz singer Kurt Elling, organist Joey DeFrancesco, trombonist Wycliffe Gordon, trumpeter Jon Faddis, Basie band alumni vocalists Carmen Bradford and Jamie Davis and Stevie Wonder.
All About That Basie opens with a foot stomping, swinging version of the Joe Williams classic, “Everyday I Have the Blues,” featuring multi-Grammy winning vocal group Take 6 adding their contemporary vocal arrangement on top of the classic Basie hit.
Second up is the album’s first “new” entry into the Basie songbook, Earth, Wind and Fire’s hit “Can’t Hide Love.” The swinging track features the virtuoso plunger trombonist Wycliffe Gordon soloing and leading the trombone section with guest pianist Eric Reed underscoring the orchestra with soulful piano accompaniment. “Can’t Hide Love” is re-imagined with a sophisticated harmonic sheen and a swinging pulse all delivered in classic Basie style.
When incorporating new material into the Basie repertoire, Barnhart says: “I look for tunes with singable melodies and interesting harmonies. Rhythmically, the orchestra is going to take care of the rest…”
The album continues with Stevie Wonder’s classic “My Cherie Amour” masterfully arranged in the style of the Basie / Neal Hefti classic, “ Lil’ Darlin’ ” and features Stevie Wonder on harmonica. “My Cherie Amour” (ala Basie) is a perfect example of All About That Basie “pop” repertoire re-imagined in timeless Basie style.
To help celebrate the era of the famous Basie and Sinatra recordings, Grammy award winning singer Kurt Elling reprises the classic Sinatra track “Don’t Worry ‘Bout Me” from the album “Sinatra at the Sands” featuring Count Basie.
Elling’s love for Sinatra is on full display with the Basie band all the while making this new recording uniquely his own. The track also features producer Gregg Field in his roll as former Basie and Sinatra drummer. A place he knows very well.
Next up the band revisits its 1950’s & 60’s ventures into “Latin” music with the classic hit “Tequila.” The track features trumpet virtuoso Jon Faddis, weaving Dizzy’s love of “Latin Jazz” into his stratospheric solo as well as solos by the band’s own Will Matthews on guitar and Bobby Floyd on piano. “Tequila” also features the legendary Chick Corea percussionist/ conguero Luisito Quintero.
The next re-imagining of a classic and adding to the “new” Basie repertoire is the Leonard Cohen signature song “Hallelujah.” Arranged by the band’s own Kris Johnson, this soulful and understated version perfectly reflects the original spirit of the song with Leonard Cohen’s message soulfully interpreted by Mark William’s plunger muted, trombone solo.
Organist Wild Bill Davis arranged Basie’s first big hit after the big band reconstituted in the early 1950’s, establishing a new and more expansive direction for the band moving beyond its original Kansas City “Blues” roots.
To celebrate “April in Paris” and Basie’s often overlooked organ recordings, Hammond B-3 virtuoso Joey DeFrancesco joins for his second time recording with the band following his debut on the Concord classic “Ray Sings / Basie Swings.”
The long-associated pairing of Ella & Basie is celebrated on the next track with the Basie band’s own vocalist Carmen Bradford, debuting a never before recorded arrangement of “Honeysuckle Rose” written for Ella by long time collaborator Benny Carter. Bradford is a master of the art of singing with 18 men swinging and she delivers a playful love letter to Ella.
The last “new” addition to the Basie orchestra book is the Adele hit “Hello,” demonstrating once again that the Basie sound remains as unique and relevant as ever.
“Hello” features a trumpet solo by arranger Kris Johnson as well as a highly stylized piano solo from the band’s own Bobby Floyd delivering Basie’s signature “splank” at the end to remind us that once again it’s all about that Basie.
Going all the way back to the band’s Kansas City roots, and to celebrate the great Basie band vocalists, Basie alum, big baritone Jamie Davis continues the tradition with a reprise of Jimmy Rushing’s hit “Sent For You Yesterday,” this time with the small band featuring leader Barnhart, Field, Eric Reed, saxophonist Rickey Woodard, and bassist Trevor Ware.
Davis shouts: “Well, you came home to Joe. You came home to Jimmy. Now it’s time you come home to me…” The Basie vocalist succession continues in great hands.
All About That Basie concludes with the great composer Thad Jones’ message “From One to Another,” which is a perfect metaphor to close the album.
The metaphor being that the Basie Orchestra is passing along the art that Basie created along with all of his musicians, the arrangers and artists who continue to collaborate with this timeless American musical treasure that is now known simply by the all encompassing “Basie.”
All About That Basie is exactly that. It celebrates the past, the present and assures a swinging musical future for all…
The Count Basie Orchestra 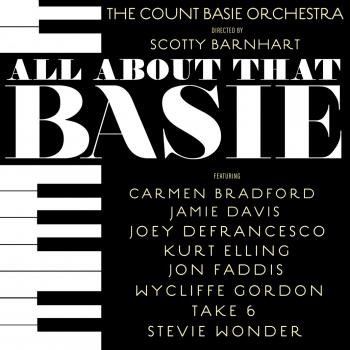 All About That Basie 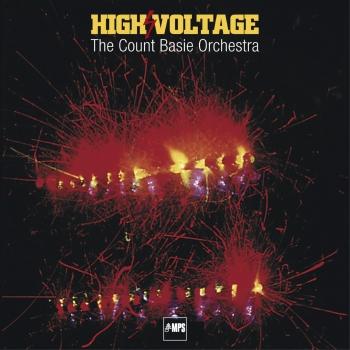 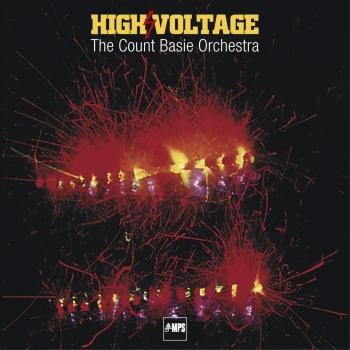 Count Basie
Born in Red Bank, New Jersey, in 1904, William "Count" Basie was not always the fabled "Count". He began his career as Bill Basie, an itinerant pianist who made his living pounding keys in theaters featuring silent movies and touring on the Theater Owners Booking Agency (TOBA) circuit, a hopscotch run of independent performance venues, in black communities stretching from East to West, North and South.
TOBA was also known as Tough On Black Artists, or less affectionately Tough On Black you-know-whats. In 1927, Basie, then touring with Gonzelle White and the Big Jazz Jamboree, found himself "high and dry" in Kansas City, Missouri. It was unlikely that Basie had followed Horace Greeley's actually John B.L. Soule's entreaty to "Go West young man" and his destiny was certainly not manifest.
As Basie recounted in his autobiography, Good Morning Blues, "I don't remember what my plans were at the time, but in the meantime I got sick and had to go to the hospital."
Nevertheless, for a musician of Basie's inclinations, Kansas City was not a bad place to be stranded. In the 1920's and 30's, Kansas City was headquarters for the territory bands that played the mid and southwest. KC was also a veritable cauldron for the heady mixture of blues principles, ineffably swinging rhythms and brilliant instrumentalists that coalesced into one of the signature sounds of American music, both popular in its appeal and substantial in its musical import.
Basie quickly fell in with the best of the territory bands, including Walter Page's Blue Devils and Benny Moten's Kansas City Orchestra. By 1935, Basie's destiny was becoming manifest. He had formulated and was leading the band that epitomized Kansas City Swing, the Count Basie Orchestra. Along with the bands of Fletcher Henderson, Duke Ellington and Benny Goodman, Basie's orchestra would define the big band era.
While the media of the time crowned Benny Goodman the "King of Swing", the real King of Swinging was undoubtedly The Count. Basie's achievements, however, would transcend the Swing Era as such. The Basie orchestra evolved into one of the most venerable and viable enterprises in American music, as meaningful in its legacy and continuing productivity as any musical organization of the 20th, and now, 21st century.
Interestingly, the critical consensus charaterizes the Basie lineage in Biblical terms, as the Old and New Testament bands. The Old Testament band's style has been summed as a combination of democratically developed, or head, riff-driven arrangements, dripping with blues essence and relaxed, but relentless, swing that showcased a who's who of very distinctive instrumentalists and vocalists: Lester Young, Hershel Evans, Harry Edison, Buck Clayton, Dicky Wells, Jo Jones, Freddie Green and Jimmy Rushing among others.
In the early 1950's, The "New Testament" Count Basie Orchestra rose Phoenix-like from the ashes of the Big Band era. For the last fifty plus years, the Count Basie Orchestra has been an arranger's palette. Thad Jones, Ernie Wilkins, Neal Hefti, Sammy Nestico, and Frank Foster, to name a few of the more prominent Basie's penmen, have added volumes to the Basie Library. Through them, the Basie repertoire has continued to broaden harmonically and rhythmically, making it more than hospitable to the talents of successive generations of musicians. As Basie allowed for certain measure of change and for a variety of voices to emerge on the platform he created, his remained the ultimate sensibility.
Since Basie's passing in 1984, Thad Jones, Frank Foster, Grover Mitchell, Bill Hughes and now Dennis Mackrel have led the Count Basie Orchestra and maintained it as one of the elite performing organizations in Jazz.
Current members include musicians hired by Basie himself: John Williams (joined in 1970), Dennis Mackrel (joined in 1983), Carmen Bradford (joined in 1983), Clarence Banks (joined in 1984), as well as Mike Williams (1987, formerly w/Glenn Miller, NTSU 1 O'Clock), Doug Miller (1989, formerly w/Lionel Hampton), Scotty Barnhart (1992) and members who have joined in the last 15 years: David Keim (formerly w/Stan Kenton), Alvin Walker, Will Matthews, Marshall McDonald (formerly w/Lionel Hampton, Paquito D'Rivera's United Nations Jazz Orchestra), Doug Lawrence (formerly w/Benny Goodman, Buck Clayton), Cleave Guyton (formerly w/Lionel Hampton, Duke Ellington Orchestra), Freddie Hendrix (Illinois Jacquet, Charles Tolliver) and our newest members: Mark Williams (Howard University), Bruce Harris, Bobby Floyd and Marcus McLaurine (formerly w/Clark Terry)