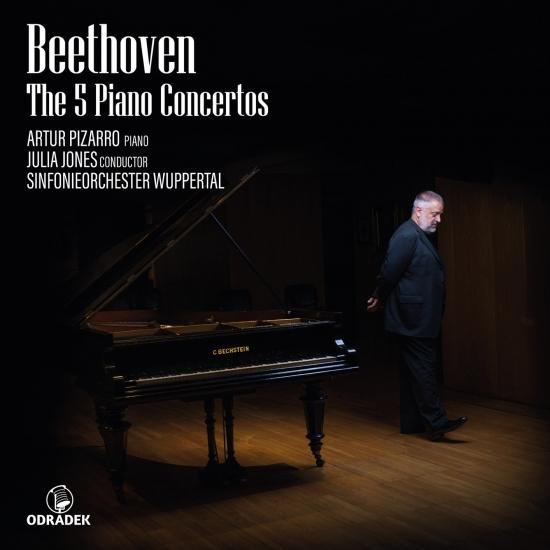 Info for Beethoven: The 5 Piano Concertos

Odradek Records is delighted to present the complete Beethoven Piano Concertos performed by Artur Pizarro and the Sinfonieorchester Wuppertal under the baton of Julia Jones. This is a recording not to be missed: Artur Pizarros interpretations are renowned internationally for their insight and nuance, and this album represents for Pizarro and his fellow musicians a very personal labour of love, especially when overcoming the obstacles of the pandemic in order to record together. The majesty, power and innovation of the Beethoven Piano Concertos is contrasted with a selection of solo pieces by Beethoven; Romances and Rondos that round off the release with irresistible intimacy. On this recording Artur Pizarro plays Bechstein grand pianos kindly provided by Bechstein. Artur Pizarro has recorded a series of highly-acclaimed albums with Odradek, including the complete Rachmaninov piano music, and Lebensreise, a disc of music by Robert Schumann, for which Pizarros playing was praised as: soft as velvet, but muscular and virtuoso if necessary technique and virtuosity are unconditionally at the service of the composers intentions (Klassiek Centraal). Pizarro also performed the Poulenc Piano Concerto with the Beethoven Philharmonie and Thomas Rsner on the album Couleurs, praised in Gramophone magazine: Pizarro seems delighted to meet the score on its own terms, turning in a performance of considerable sensitivity and subtlety.
Artur Pizarro, piano
Sinfonieorchester Wuppertal
Julia Jones, conductor 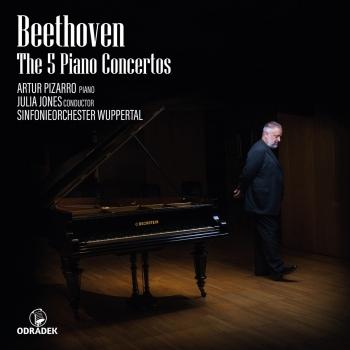 Artur Pizarro
Born in Lisbon, Portugal in 1968, Artur Pizarro gave his first public performance at the age of three and made his television début on Portuguese television at the age of four. He had been introduced to the instrument by his maternal grandmother, pianist Berta da Nóbrega, and her piano-duo partner, Campos Coelho who was a student of Vianna da Motta, Ricardo Viñes and Isidor Philipp. From 1974 to 1990 Artur studied with Sequeira Costa who had also been a student of Vianna da Motta and of Mark Hamburg, Edwin Fischer, Marguerite Long and Jacques Février. This distinguished lineage immersed Artur in the tradition of the ‘Golden Age’ of pianism and gave him a broad education in both the German and French piano schools and repertoire. During a brief interruption of his studies in the USA, Artur also studied with Jorge Moyano in Lisbon, and in Paris worked with Aldo Ciccolini, Géry Moutier and Bruno Rigutto.
Artur won first prizes in the 1987 Vianna da Motta Competition, the 1988 Greater Palm Beach Symphony Competition and won first prize at the 1990 Leeds International Pianoforte Competition, which marked the beginning of an international concert career.
Artur Pizarro performs internationally in recital, chamber music and with the world’s leading orchestras and conductors including Sir Simon Rattle, Philippe Entremont, Yan Pascal Tortelier, Sir Andrew Davis, Esa-Pekka Salonen, Yuri Temirkanov, Vladimir Fedoseyev, Ilan Volkov, Franz Welser- Most, Tugan Sokhiev, Yakov Kreizberg, Yannick Nézet-Séguin, Libor Pešek, Vladimir Jurowski, Ion Marin, John Wilson and the late Sir Charles Mackerras.
Artur is an active chamber musician and has performed at chamber music festivals throughout the world. Artur Pizarro has recorded extensively for Collins Classics, Hyperion Records, Linn Records, Brilliant Classics, Klara, Naxos, Danacord, Odradek Records and Phoenix Edition.
Artur Pizarro has received various awards from his native Portugal for services to classical music and culture including the Portuguese Press Award, the Portuguese Society of Authors award, the Medal of Culture of the City of Funchal and the Medal of Cultural Merit from the Portuguese Government.
Artur Pizarro has created his private teaching studio in Oeiras, Portugal where he coaches students of various ages and levels.