Yeah!!! In Person with Her Quartet Aretha Franklin 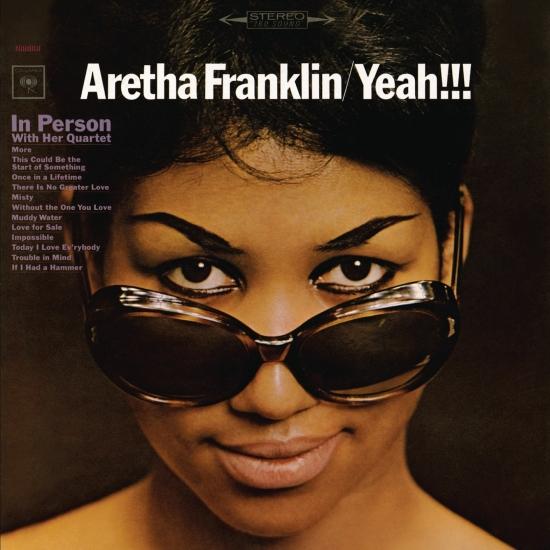 Info for Yeah!!! In Person with Her Quartet

A hip little live date from Aretha Franklin – one that's got a very jazzy feel, and some great small combo backings! The album's almost a distillation of the jazzy styles on Aretha's first albums for Columbia – taken into even leaner territory here, in ways that really set Franklin loose on vocals – making for some of her most forceful moments on record at the time. The quartet features pianist Teddy Harris, who steps back on a few tunes to let Franklin take over the piano – and titles include "Once In A Lifetime", "Love For Sale", "Impossible", "Today I Love Everybody", and "Without The One You Love".
Recorded February-April, 1965 at Columbia Studios, New York City, NY
Produced by Clyde Otis
Digitally remastered

Jump To It (Remastered)

A Brand New Me: Aretha Franklin (with The Royal Philharmonic Orchestra)

Let Me In Your Life (Remastered)

Spirit In The Dark

I Never Loved A Man The Way I Loved You (Mono)

Sparkle (Music From The Motion Picture)

Hey Now Hey (The Other Side Of The Sky)

Aretha In Person With The Ray Bryant Combo

Laughing On The Outside

Unforgettable: A Tribute To Dinah Washington

Runnin' Out Of Fools

Yeah!!! In Person with Her Quartet

The Queen In Waiting

The Tender, The Moving, The Swinging Aretha Franklin

A Bit Of Soul

Aretha Franklin
She is known the world over by her first name and as the undisputed, reigning 'Queen Of Soul,' Aretha Franklin is peerless. This 2005 recipient of a Presidential Medal Of Freedom honor (the U.S.A.'s highest honor), 17 Grammy Awards (and counting), a Grammy Lifetime Achievement Award and a Grammy Living Legend Award. She has received countless international and national awards and accolades. Aretha has achieved global recognition on an unprecedented scale. She has influenced generations of singers from Chaka Khan, Natalie Cole and Mary J. Blige to 'American Idol' winner Fantasia Burrino and Oscar- winning Jennifer Hudson. Her ever-distinctive soulful, to-the-bone vocal style has graced the music charts for over four decades and while her 'live' performances have touched the hearts of literally millions since she began her musical journey as a gospel-singing child prodigy, it is her rich legacy of recordings that are a testament to the power, majesty and genius of this one-of-a-kind artist of the first order.
Beyond the timeless classic hits such as 'Respect,' 'A Natural Woman,' 'Chain Of Fools,' 'Think,' 'Daydreaming' and 'Freeway Of Love' among the dozens of chart-topping records that have established her as a cultural icon, Aretha Franklin's catalog of over forty albums informs listeners of her unmatched, unparalleled artistry as an interpreter of song, bar none. Her elevation to 'royal' status is indeed not just a function of her hitmaking ability but of her unique inventiveness as a musician who fuses art and soul seamlessly. Indeed, it's often been said that Aretha could take 'happy birthday' and turn it into a veritable opus and while those who know her will testify to her culinary skills in the kitchen, it is her mastery as a musical chef that is evident on each and every one of those forty-plus albums, many of which have achieved gold and platinum status.
As is widely known, Aretha, born in Memphis, (reared in Buffalo but a longtime resident of Detroit,) began her personal musical journey singing at her much-revered father Reverend C.L. Franklin's New Bethel Baptist Church at a very young age. While she was unquestionably influenced by the presence of such gospel luminaries as Clara Ward (a strong influence), Mahalia Jackson and the Reverend James Cleveland in the Franklin household, it was secular performers such as Dinah Washington and Sam Cooke (also visitors to the Franklin residence) who helped shape Aretha's wide-ranging interest in popular music. Young Aretha also heard the doo-wop sounds of Nolan Strong and The Diablos, The Moonglows, The 5 Royales and The Satins as well as popular '50s hitmakers such as Johnny Ace, Little Willie John, Jackie Wilson, Big Maybelle and Little Esther on the radio.
Aretha's interest in a wide range of popular music became evident when she began her own recording career at Columbia Records, although it should be noted that her powerful, emotive style was first heard on a gospel recording made in 1956 with her father and released by Chess Records in the mid-'60s. With the support of her father, Aretha traveled to New York City in 1960 and after a demo which contained her version of a Helen Humes tune titled 'Today I Sing The Blues' made its way to the ears of executive John Hammond (responsible for signing such artists as Billie Holiday, Bessie Smith and Bob Dylan), Aretha was signed to Columbia in 1960. For more information please visit the Aretha Franklin homepage.