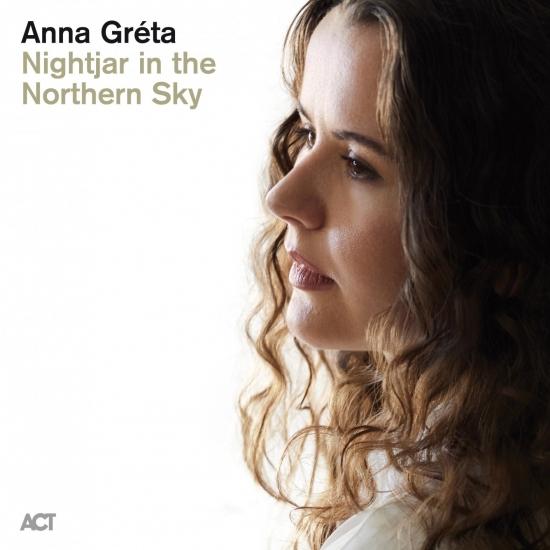 Info for Nightjar in the Northern Sky

On her debut album, the Icelandic pianist and singer Anna Gréta, who lives in Sweden, enchants with subtle songs, her nuanced voice and expressive piano playing between jazz, indie and folk. A remarkable new player in the "Nordic Sound".
Nightjar in the Northern Sky. An iconic, almost familiar image that instantly sets up a scenery, a temperature, a state of mind. Why? Probably because it has such a strong effect describing a place of longing that many people are only too happy to imagine themselves in.
The album of the same name by pianist and singer Anna Gréta creates such a setting, implying vast spaces, diffused Nordic light and comforting intimacy. Her music is shaped by these familiar yet surreal Nordic sounds, which her native Iceland has instilled in her since birth. Growing up near the capital of Reykjavík, her father (who also guests on the album) is a jazz saxophonist – so it’s evident that music surrounded her throughout her childhood. The first formative influence that Anna Gréta remembers was The Beatles’ Let It Be: “This song, its simplicity and power, and the harmony between voice and piano, touch me to this day”. But jazz, also, was a constant companion throughout her youth - among many others, the music of Bill Evans opened up a whole musical world. Indeed, her talent for the piano came to light early on, as did her affinity with jazz; and, as a youngster, she played her first steady jazz gig in Reykjavik. In 2014, Anna Gréta eventually moved to Stockholm - where she still lives today - to study music at the Royal College of Music.
Anna Gréta quickly caused a stir in Sweden. She began to work with the country’s prominent jazz musicians such as Joakim Milder, Magnus Lindgren, or the Norrbotten Big Band, receiving numerous prizes, including the ‘Monica Zetterlund Scholarship’, a nomination for ‘Jazzkatten’ from Swedish Radio, the Icelandic Music Award as ‘Newcomer of the Year’ and the ‘Jazzclub Fasching Society Award’. She made prominent live appearances such as at the Nobel Prize in 2020 and a concert at Stockholm Concert Hall. In 2019, Brighter, her first album as co-leader with Swedish guitarist Max Schultz, was released. Hearing Anna Gréta at the piano, one witnesses an astonishingly mature artist, with profound technique, a deep understanding of style and harmony and a vast range of expression.
So as a pianist she has already made a real name for herself. But her songwriting affinity for vocal expression was calling for something else: “I always had the greatest respect for female singer-instrumentalists, like the wonderful Norah Jones. But at the same time, I didn’t want to be forced into this stereotype, that a woman in a jazz band automatically needed to be the singer. So it was important for me to dive deeper into the piano to grow as a musician as a whole, until I could finally introduce my own voice when it felt right, rather than meeting any kind of expectation.” Eventually, over a period of two years, and partly influenced by the isolation of the global pandemic, the twelve compositions of Nightjar in the Northern Sky emerged – with Anna Gréta now as both pianist and vocalist. Together with pop-experienced producer Albert Finnbogason, she chose the perfect, hand-picked line-up and sound for each of her refined, harmonious compositions. And, although created within a cohesive framework, she draws elements from a diverse range of musical styles – especially blending elements of jazz, pop, classical and folk.
The recording’s title sets the tone for the imagery created by Anna Gréta’s songs – a metaphor for Scandinavian expanses, tranquillity and the close connection to nature. As she says, “Nature is just so much bigger than most of the other things that otherwise seem so significant to us. And it is, in its infinite facets, perhaps the greatest inspiration for my music. A place where the noise falls silent and you can feel and hear yourself again. Recently, I have been introduced to birdwatching – something that I reflect on in the title track. When you observe nature carefully, you can experience something unique – a little like searching for love. The nightjar is a bird that is rarely seen flying across the sky in Sweden and has been seen in Iceland less than five times. I feel that everyone is looking for something unique in their lives; and nature can offer that to those who are open to it.” And so, with each of the tracks on this album, she creates self-contained worlds that are part of a bigger picture, light-footed, relaxed, reduced, concentrated. And a remarkably multilayered, immersive and beautiful experience.
Anna Gréta, piano, keyboards, vocals, backing vocals
Skúli Sverrisson, bass
Einar Scheving, drums
Hilmar Jensson, guitar
Sigurður Flosason, saxophone
Johan Tengholm, double bass
Ragnheiður Gröndal, backing vocals

Booklet for Nightjar in the Northern Sky