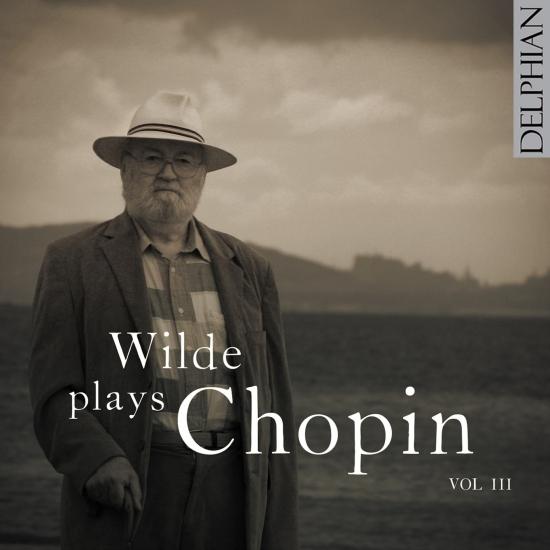 This is the third installment of a magnificent Chopin journey by David Wilde. The first two volumes received rave reviews and this volume is sure to follow suit. Frédéric Chopin, a leading symbol of the Romantic era, wrote mainly for solo piano with a style that was highly individual and technically challenging. This is Chopin absorbed and reshaped: the radical expressive outcome of a lifetime's involvement with this inexhaustible composer. Wilde has given seven solo performances at the BBC Proms and won first prize at the Liszt - Bartók competition in Budapest in 1961. Wilde records exclusively with Delphian and his catalogue includes works by Liszt, Beethoven, Schumann, Brahms, and more. Wilde "scorns all easy facility, presenting Chopin not as the familiar salon dandy but as an epic, gnarled and rugged genius shaking his fist at the universe with all the defiance of King Lear." (Gramophone)
"Wilde's burning sincerity makes for compulsive if exhausting listening. He has again written his own notes, is excellently recorded, and if you like Chopin given with a steep and original slantthen this is for you." (Gramophone)
"I have to urge any Chopin enthusiast to listen to this. There is nothing else like it." (MusicWeb International)
"David Wilde lives up to his name. The octogenarian pianist does not do glossy or pretty - instead, this final volume of his Chopin series is a full-on blast of volatile extroversion. Wilde's piano twangs and growls; rubato comes in enormous swells; chordal passages are delivered with craggy, uncompromising attack." (The Guardian)
"Wilde delivers an extremely emotional Chopin. While the Nocturne, Op. 48:1 shows an interesting tempo choice, it feels too slow and employs too much rubato. Etude 10:3 shows the same emphasis on emotion, with some lyrical moments that do tug on one's heart. Wilde clearly displays a high level of comfort with this material, and his more unreserved, yet adept perspective on Chopin does sound fresh." (American Record Guide)
David Wilde, piano 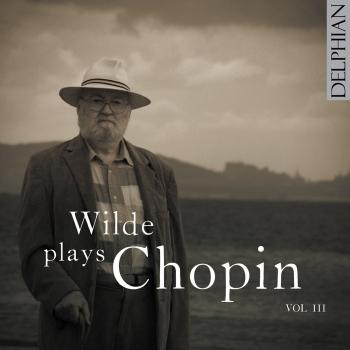 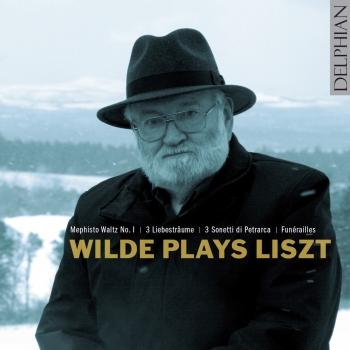 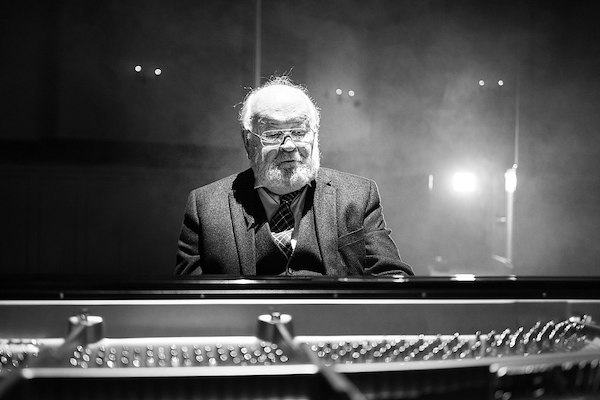 David Wilde
Pianist and composer David Wilde was born in Manchester in 1935. A busy wartime career as ‘boy pianist’ brought him to the attention of the legendary pianist Solomon, who arranged for Wilde to study with his pupil and assistant Franz Reizenstein. Later, from 1949, Wilde studied composition with Professor Richard Hall at the Royal Manchester College of Music (precursor of the Royal Northern College of Music), of which he was elected a Fellow in 1953. In the same year he was awarded the prestigious Walter Dayas Gold Medal. In 1961 Wilde won a first prize at the Liszt–Bartók competition in Budapest. The legendary Nadia Boulanger was a jury member and invited him to visit her in Paris at any suitable time, so when in the same year Wilde was awarded a senior scholarship by the Caird Foundation of Dundee he wrote to accept her invitation and ask if he might work with her. Wilde joined her in Paris and at the Conservatoire Americain in Fontainebleau (of which Boulanger was then Musical Director) in 1963, and again in 1964 and 1968, remaining in close touch with ‘Mademoiselle’ for the rest of her long life.
Wilde is a passionate teacher, and his pupils include Jack Gibbons, now pursuing a brilliant career in the USA; Christopher Oakden, now Professor at the Hochschule für Musik und Theater in Hannover; Thomas Hell, winner of the European Competition for contemporary Music in Orleans, and Bulgarian pianist Irina Georgieva. Wilde taught at the Hochschule für Musik und Theater in Hannover from 1981 to 2000, and was made a Professor Emeritus of the State of Lower Saxony in 1983. He has given many lectures in both English and German, including his paper on psychology and the meaning of music, ‘Listening to the Shadows’. His Jungian analysis of Liszt’s Piano Sonata in B minor, which he read and illustrated at London’s Analytical Psychology Club (of which he and his late wife, poet, historian, linguist and musician Jane Mary Wilde were elected life members), was originally written as a contribution to the book Analecta Lisztiana, ed. Michael Saffle (publ. Virginia Tech, USA).
During the 1990s, having travelled to besieged Sarajevo to support his heroic colleagues there, Wilde composed several works protesting against human rights abuses in our time, notably The Cellist of Sarajevo (1992), the Suite for Violin and Piano, Cry ‘Bosnia-Herzegovina’, the String Quartet (of which the last movement is a ‘Threnody for the Unknown Victim of War and Oppression’), and the opera London under Siege, after an idea by Bosnian poet Goran Simic. The Cellist of Sarajevo, dedicated to Vedran Smailovic, is played the world over and was recorded by Yo-Yo Ma for Sony Classical, and London under Siege was produced by the State Theatre of Lower Saxony in 1998. Wilde was twice honoured by the Bosnians: in 2003 he was awarded a diploma by the International Peace Committee of Sarajevo ‘for services to human rights in Bosnia Herzegowina and throughout Europe’ and was presented with the ‘Symbol of the Open Door’, representing honorary Bosnian Citizenship.
David Wilde has given many concert tours of the UK and played frequently with all the major London orchestras, all the BBC orchestras, and the Royal Liverpool Philharmonic, Bournemouth Symphony, City of Birmingham Symphony, Royal Scottish National and Hallé Orchestras. He has appeared regularly at the Henry Wood Proms with conductors such as Horenstein, Boulez and Downes, and has toured New Zealand and played and taught in Australia, Bulgaria, Canada, India, Russia, the USA, most countries of Western Europe and, of course, Hungary. His recordings include all of Beethoven’s Sonatas for violin and piano and the Sonata by Reizenstein with violinist Erich Gruenberg, Alan Bush’s Variations, Nocturne and Finale on an English Sea Song (in a version for piano and orchestra which Wilde had premiered at the Cheltenham Festival), and concertos by Thomas Wilson (especially composed for Wilde) and Sir Lennox Berkeley. In his recently published diaries Berkeley, who was present at the recording of his concerto, wrote simply: ‘David Wilde was first class.’ More recently, Wilde commissioned a sonata from Gabriel Jackson with funds from the Scottish Arts Council, the Britten-Pears Trust and the Ralph Vaughan Williams Trust, and premiered it at the Queen’s Hall, Edinburgh in 2007. He gave the European premiere of this work during a recital in Braunschweig, Germany in October 2008. Also in 2007 EMI reissued Wilde’s 1968 HMV Liszt recital, coupled with Liszt recordings by Earl Wild. Wilde now records exclusively for Delphian Records: his recordings include the complete piano works of Luigi Dallapiccola (DCD34020), a highly acclaimed Liszt Sonata coupled with the seven Elegies of Busoni (DCD34030), a Schumann recital (DCD34050), a Brahms recital (DCD34040), a Beethoven recital (DCD34090) and a Liszt recital (DCD34118). His Chopin recital from the Wigmore Hall (DCD34010) has recently been complemented by two further discs, Wilde plays Chopin Vol II (DCD34138), and Wilde plays Chopin Vol III (DCD34159).