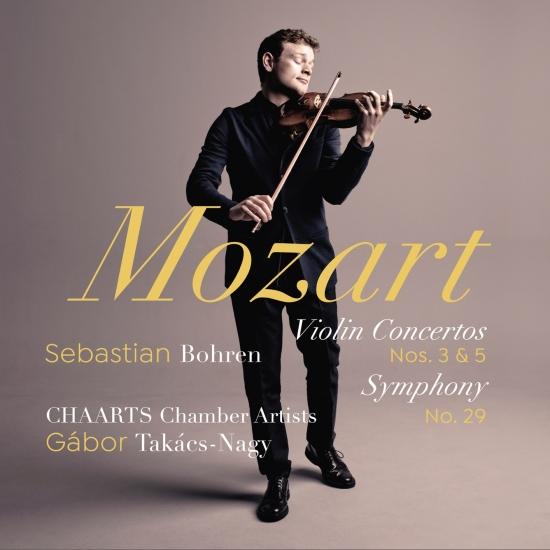 Swiss violinist Sebastian Bohren, whose star is rapidly in the ascendant, makes his AVIE label debut with two concertos from Mozart’s “year of the violin” – Nos. 3 and 5 – paired with the composer’s youthful Symphony No. 29. Sebastian’s interpretations bring out the sparkling energy of the concertos, written when Mozart was just 19 years old, yet at the same time a brandish a smoothly burnished sense of style. His partners on the album, famed Hungarian violinist-turned conductor Gábor Takács-Nagy and Sebastian’s compatriots the CHAARTS Chamber Artists – comprised of leading European soloists and chamber musicians – perfectly embody these contrasting characteristics, both in their accompaniments and their reading of the Symphony which was written within a year of the concerti.
Sebastian is equally at home as a soloist and chamber musician. He has performed with the Lucerne Symphony, Royal Liverpool Philharmonic and Basel Symphony Orchestras, among others, under such conductors as James Gaffigan, Andrew Litton and Ivor Bolton. His chamber music collaborators have included Dmitry Sitkovetsky, Thomas Demenga and Konstantin Lifschitz. He plays the “Ex-Wanamaker-Hart” violin made by Guadagnini in Parma in 1761.
Sebastian Bohren, violin
CHAARTS Chamber Artists
Gábor Takács-Nagy, conductor 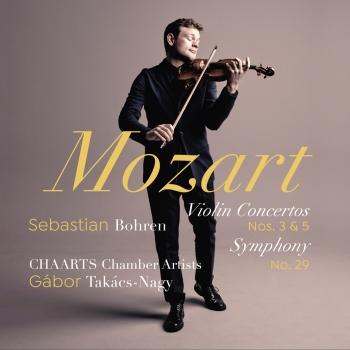 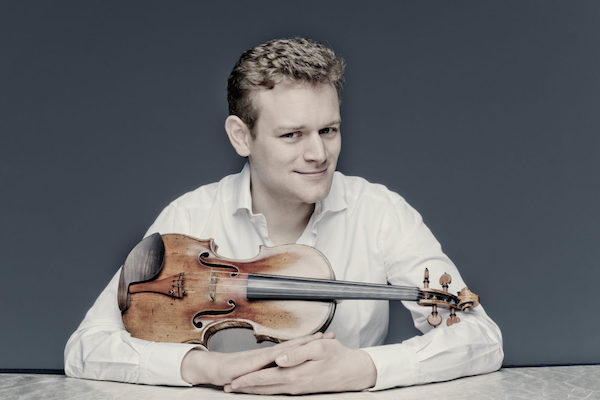 Sebastian Bohren
Described by the Süddeutsche Zeitung as one of the most “serious and unassuming musicians of his generation”, Sebastian Bohren has appeared in concert as both soloist and chamber musician with the Royal Liverpool Philharmonic Orchestra, NDR Radiophilharmonie in Hanover, the Basel Symphony Orchestra, Lucerne Symphony Orchestra, Musikkollegium Winterthur, Festival Strings Lucerne, Württembergische Philharmonie Reutlingen, the St Petersburg Staatskapelle, the Orchestra di Padova e del Veneto, Argovia Philharmonic, the Zug Sinfonietta, Göttingen Symphony Orchestra and Kammerphilharmonie Graubünden, as well as the Zurich and Basel Chamber Orchestras, under Mario Venzago, Andrew Manze, Elim Chan, James Gaffigan, Patrick Lange, Andrew Litton, Douglas Boyd, Philippe Bach and Gábor Takács-Nagy.
Sebastian Bohren made his Lucerne Festival debut in 2018. As a soloist he performs a wide-ranging repertoire that runs from Bach to the present day, and he has also been guest conductor with various ensembles, including the Basel Chamber Orchestra, the Zurich Camerata, CHAARTS, the Georgian Chamber Orchestra of Ingolstadt, Bern Chamber Orchestra, Kurpfälzisches Kammerorchester Mannheim andthe Württembergische Kammerorchester Heilbronn.
Forthcoming highlights include appearances with Daniel Hope and the Zurich Chamber Orchestra in Schnittke’s Concerto grosso no.1, with the Basel Symphony Orchestra in Eötvös’s “Seven” and Gubaidulina’s “Offertorium”, Bartók’s First Violin Concerto with the Orchestra Svizzera Italiana under Heinz Holliger, as well as Korngold’s Violin Concerto with the Orchestre de Chambre Fribourgeois in the Casino Bern. There are further plans for concerts with the Romanian Chamber Orchestra with Cristian Macelaru, the Cologne Chamber Orchestra under Christoph Poppen, the Munich Chamber Orchestra and the Orchestre de Chambre de Lausanne.
Sebastian Bohren’s recording of Beethoven’s Violin Concerto with CHAARTS was enthusiastically received in the music press. Subsequently, 2017 saw the release of his recording of violin concertos by Mendelssohn, Hartmann and Schubert and the digital live albums of music by Vasks, Kancheli and Shostakovich. His recording of the first part of a projected complete recording of Bach’s Sonatas and Partitas was released in June 2018 and described by Concerti as “full of spirit, sparkling with wit and filled with warmth and sympathy [...]”. His recording of violin concertos by Mendelssohn and Britten with the Royal Liverpool Philharmonic under Andrew Litton was released in January 2019, and followed in September of the same year by the recording of a new arrangement of Prokofiev’s First Violin Sonata. His recording of Mozart’s Violin Concertos nos. 3 and 5 will be released on the Avie label in June 2021.
Sebastian pursues his passion for chamber music in collaborations with such artists as Roby Lakatos, Dmitry Sitkovetsky, Konstantin Lifschitz, Benjamin Schmid, Reto Bieri, Thomas Demenga, Hansheinz Schneeberger, Yekwon Sunwoo, Christian Poltera and Antoine Tamestit.
Between 2013 and 2020 Bohren was a member of the Stradivari Quartet. He performed with the ensemble in the Chamber Hall of the Berlin Philharmonie, the Chamber Hall of the Elbphilharmonie in Hamburg, the National Center for Performing Arts in Beijing, Shanghai Symphony Hall, Victoria Hall in Singapore and on tour in Japan and Korea. Other highlights wereappearances at the Rheingau Music Festival, the Bad Kissingen Summer Festival and the Mecklenburg-Vorpommern Festival. The collaboration has been documented in recordings of works by Mozart, Schumann and Schubert.
Sebastian Bohren was born in 1987 and attended the Kunst- und Sportgymnasium in Zurich. He was taught violin by Jens Lohmann and went on to study with Robert Zimansky and Zakhar Bron in Zurich, with Igor Karsko in Lucerne and with Ingolf Turban at Munich’s University of Music and Performing Arts. Other seminal influences have been Ana Chumachenco, Hansheinz Schneeberger, Christoph Poppen, Heinrich Schiff,and Dmitry Sitkovetsky and Christian Tetzlaff.
Sebastian Bohren lives in Zurich but continues to maintain close links with the canton of Aargau, where he was born. In 2015 and 2020 he was awarded grants by the Aargauer Kuratorium, and in the summer of 2015 he was Festival Artist at the Festival Boswiler Sommer. He also runs his own highly successful concert series “Stretta Concerts” in Brugg, and the Worte und Klänge (Words and Sounds) series in the Bellevue Park Hotel in Adelboden. Sebastian Bohren plays a violin made by Giovanni Battista Guadagnini in Parma in 1761, the “Ex-Wanamaker-Hart”.