Weasels Ripped My Flesh (Remastered) The Mothers Of Invention 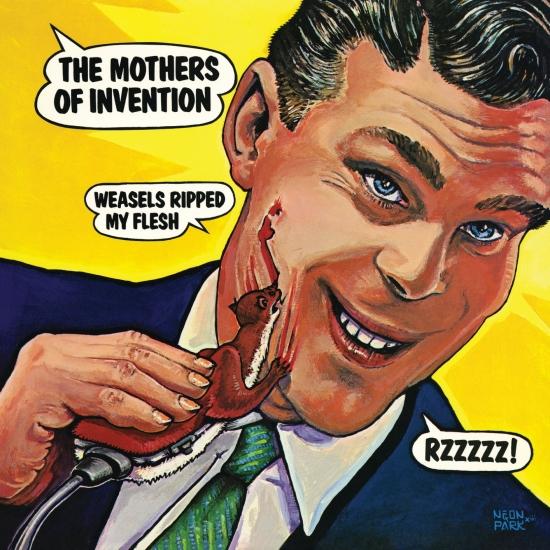 Artist: The Mothers Of Invention

Weasels Ripped My Flesh is the tenth studio album by the Mothers of Invention, released in 1970. It is the second posthumous Mothers album released after the band disbanded in 1969, preceded by Burnt Weeny Sandwich. In contrast to it's predecessor, which predominately focused on studio recordings of tightly arranged compositions, Weasels Ripped My Flesh largely consists of live recordings and features more improvisation. Whereas all but one of the pieces on Burnt Weeny Sandwich have a more planned feel captured by quality studio equipment, five tracks from Weasels Ripped My Flesh capture the Mothers on stage, where they employ frenetic and chaotic improvisation characteristic of avant-garde jazz and free jazz. This is particularly evident on "Eric Dolphy Memorial Barbecue," a tribute to the multi-instrumentalist, cited as a musical influence in the liner notes to the band's Freak Out! Album, who died in 1964. The album also documents the brief tenure of Lowell George (guitar and vocals), who went on to found the country-rock band Little Feat with Mothers bassist Roy Estrada. On "Didja Get Any Onya", George affects a German accent to relate a story of being a small boy in Germany and seeing "a lot of people stand around on the corners asking questions, 'Why are you standing on the corner, acting the way you act, looking the way you look, why do you look that way?'"
"A fascinating collection of mostly instrumental live and studio material recorded by the original Mothers of Invention, complete with horn section, from 1967-1969, Weasels Ripped My Flesh segues unpredictably between arty experimentation and traditional song structures. Highlights of the former category include the classical avant-garde elements of "Didja Get Any Onya," which blends odd rhythmic accents and time signatures with dissonance and wordless vocal noises; these pop up again in "Prelude to the Afternoon of a Sexually Aroused Gas Mask" and "Toads of the Short Forest." The latter and "The Eric Dolphy Memorial Barbecue" also show Frank Zappa's willingness to embrace the avant-garde jazz of the period. Yet, interspersed are straightforward tunes like a cover of Little Richard's "Directly From My Heart to You," with great violin from Don "Sugarcane" Harris; the stinging Zappa-sung rocker "My Guitar Wants to Kill Your Mama," and "Oh No," a familiar Broadway-esque Zappa melody (it turned up on Lumpy Gravy) fitted with lyrics and sung by Ray Collins. Thus, Weasels can make for difficult, incoherent listening, especially at first. But there is a certain logic behind the band's accomplished genre-bending and Zappa's gleefully abrupt veering between musical extremes; without pretension, Zappa blurs the normally sharp line between intellectual concept music and the visceral immediacy of rock and R&B. Zappa's anything-goes approach and the distance between his extremes are what make Weasels Ripped My Flesh ultimately invigorating; they also even make the closing title track -- a minute and a half of squalling feedback, followed by applause -- perfectly logical in the album's context." (Steve Huey, AMG)
Frank Zappa, lead guitar, vocals
Jimmy Carl Black, drums
Ray Collins, vocals
Roy Estrada, bass, vocals
Bunk Gardner, tenor saxophone
Lowell George, rhythm guitar, vocals
Don "Sugarcane" Harris, vocals, electric violin
Don Preston, organ, RMI Electra Piano, electronic effects
Buzz Gardner, trumpet and flugel horn
Motorhead Sherwood, baritone saxophone, snorks
Art Tripp, drums
Ian Underwood, alto saxophone
Digitally remastered