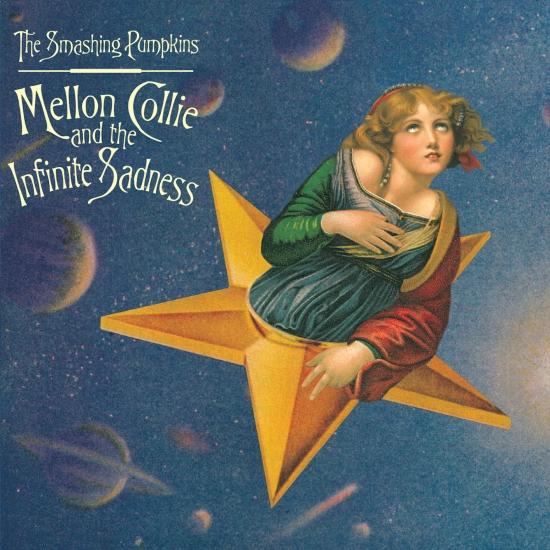 Info for Mellon Collie And The Infinite Sadness (Deluxe Edition)

'Bullet With Butterfly Wings' won a 1997 Grammy Award for Best Hard Rock Performance. Smashing Pumpkins were nominated for five additional 1997 Grammys for „Mellon Collie And The Infinite Sadness“. The album was nominated for Album Of The Year and Best Alternative Music Performance; '1979' was nominated for Record Of The Year and Best Rock Performance By A Duo Or Group With Vocal; and the title track was nominated for Best Pop Instrumental Performance.
For all the criticisms levied on head Pumpkin Billy Corgan, one thing he can't be accused of is being narrow in his artistic vision. On the breakthrough „Siamese Dream“, he and co-producer Butch Vig built a landscape of layered, corrosive guitars that shimmered brighter with each additional glance. On „Mellon Collie And The Infinite Sadness“, Corgan turns his eye to the dreariness of modern existence and comes up with a broad alterna-rock opus that plays out like an offspring of Roger Waters and Kurt Cobain--verbose and angst-ridden, bleak in its view, cathartic in nature.
With its two distinctly titled song-cycles and overture-like title track, there is no doubt that „Mellon Collie And The Infinite Sadness“ is meant to be approached as a concept album, and Corgan's lyrical musings only reiterate the point. The songs explore alienation in the physical and spiritual worlds, generally concluding that it can seldom be overcome. Only the early 'Tonight, Tonight' offers a glimmer of hope ('believe that life can change, that you're not stuck in vain'), on the wings of a soaring, string-laden production. Far more constant are spiritually depleting images of 'the world [as a] vampire, sent to drain' ('Bullet With Butterfly Wings'), of love as 'suicide' ('Bodies'') and of heaven's unresponsiveness ('Zero'). The constant din of guitars that illuminated „Gish“ and „Siamese Dream“ has been replaced with a varied sonic palette that reflects „Mellon Collie And The Infinite Sadness’s“ operatic nature.
Piano interludes connect the opening title track and the closing 'Farewell And Goodnight'; harps, harpsichords and other heavenly sounds trim 'Cupid De Locke'; synthetic, Cars-like drums and a general faux-New Wave feel spur on '1979'; and 'X.Y.U.' explodes with distorted guitar wallops and yelped vocals that scream post-modern confusion. The 28 tracks are as motley and disconcerting as the world they describe, and „Mellon Collie And The Infinite Sadness“ is a dispiriting glimpse from the eyes of a man whose last vestiges of hope seem lost.
Originally released October 24, 1995, „Mellon Collie And The Infinite Sadness“ would debut at #1 on the Billboard 200 chart and was certified 9x platinum by the RIAA. It yielded major hits like 'Bullet With Butterfly Wings' the band's unlikely first Top 40 hit the exquisite '1979' and epic 'Tonight, Tonight' as well as a thoroughly inspired series of videos. Produced by BILLY CORGAN, Flood and Alan Moulder, the album would also earn a Grammy Award (1996 Best Hard Rock Performance for 'Bullet With Butterfly Wings') as well as seven nominations. Beyond the more obvious hits, though, „Mellon Collie And The Infinite Sadness“ is a song cycle of unusual depth and considerable range. It is a collection of stunningly beautiful moments when everything lined up--a moment in time that's still here to be treasured.
'...Billy Corgan has built the asteroid of his dreams....music that rejects standard song shapes in favor of a more ambient, uncontainable sonic narrative....all very lush....[Corgan] sings for the awkward adolescent in all of us, the mad little creature wanting to conquer, destroy, and embrace life all at once...' (Spin)
Billy Corgan, guitars, piano, vocals
James Iha, guitar
D'Arcy, bass
Jimmy Chamberlin, drums (vocals on 'Farewell and Goodnight“)
Additional personnel:
Greg Leisz, pedal & lap steel guitars
Chicago Symphony Orchestra (orchestra in 'Tonight, Tonight“)
Produced by Flood, Alan Moulder, Billy Corgan
Digitally remastered by Bob Ludwig in 2012 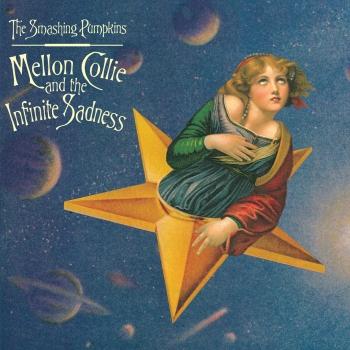