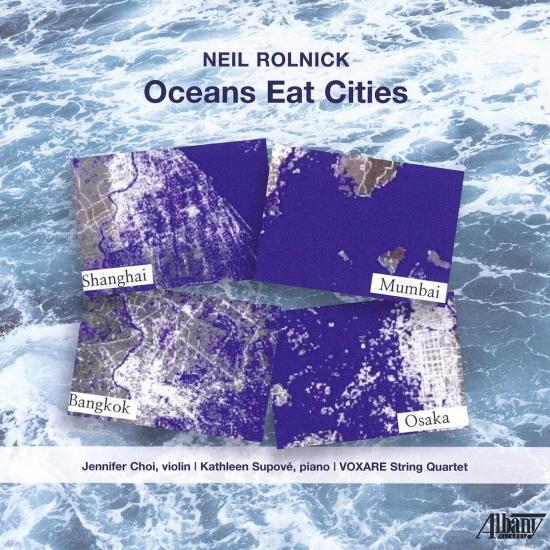 Composer Neil Rolnick pioneered the use of computers in musical performance, beginning in the late 1970s. His music has been performed worldwide and appears on 21 recordings. The recipient of numerous awards, residencies, and commissions, his music often explores combinations of digital sampling, interactive multimedia, and acoustic vocal, chamber, and orchestral ensembles. He developed the first integrated electronic arts graduate and undergraduate programs in the US at Rensselaer Polytechnic Institute's iEAR Studios, where he was a professor for 32 years. The three works on this recording include one for string quartet with computer; a work for piano and laptop computer; and a work for violin, piano, and laptop computer.
"A pioneer who introduced computers to music way back in the late ‘70s, Neil Rolnick’s esteemed use of digital sampling, interactive media, acoustic vocal, chamber and orchestral sounds has been present on over 20 recordings, and here he welcomes several players to flesh out 3 very elaborate compositions. “No Change In Carbon Emissions, RCP 8.5” starts the listen with quivering strings and no lack of atmosphere as the mood shifts from haunting to mysterious alongside plenty of glowing work from Wendy Law’s cello, Erik Peterson’s viola, and violins by Emily Ondracek and Galina Zhdanova. “Mirages” lands in the middle, and hosts Rolnick’s profound talent on piano and computer, as low rumbling and exploratory key work covers themes related to the chapters “Water”, “Desert” and “Highway”. The album ends with “Deal With The Devil”, where Jennifer Choi lends her violin talent, and Katherine Supové’s piano and Rolnick’s computer skills make for a very playful, meticulous and unconventional form of chamber and orchestral hybrid. Tragedy struck Rolnick in 2018 with the passing of his wife, Wendy. He vowed to continue with his music, while keeping her spirit alive with his art. It’s safe to say that his inimitable vision is still as exciting today as it was decades ago, and he’s certainly keeping his word to his late wife with some of his most creative work yet." (Take Effect)
VOXARE String Quarter
Neil Rolnick, piano, computer
Jennifer Choi, violin
Kathleen Supové, piano 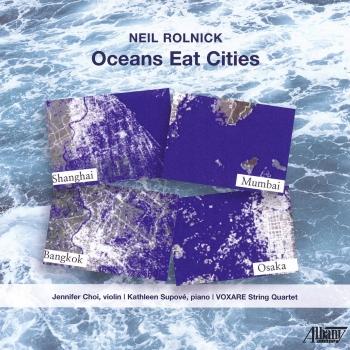 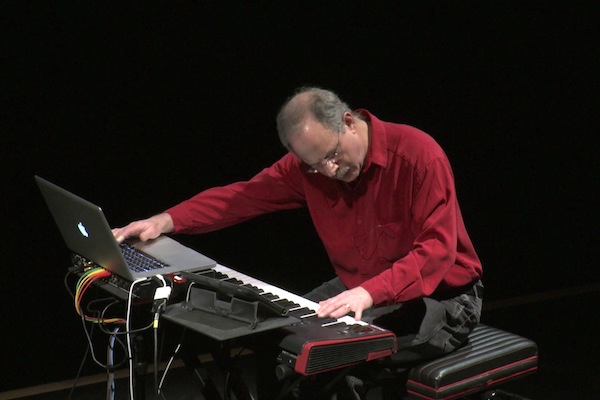 Neil Rolnick
pioneered in the use of computers in musical performance, beginning in the late 1970s. Based in New York City since 2002, his music has been performed world wide, including recent performances in Cuba, China, Mexico and across the US and Europe. His string quartet Oceans Eat Cities was performed at COP21, the UN Global Climate Summit in Paris in Dec. 2015. In 2016 and 2017 he was awarded an ArtsLink Grant for a residency in Belgrade, Serbia, a New Music USA Project Grant and an artist residency at the Bogliasco Foundation’s Liguria Study Center near Genoa, Italy. In 2019 he received an Individual Artist Grant from the New York State Council on the Arts, through the Tribeca New Music Festival, for a new work for pianist Geoff Burleson. In 2020 he was featured at the Primavera en la Habana festival in Cuba, just before the city was closed by COVID-19. In 2021 a new work for streaming media will be premiered by Ensemble Échappé.
Rolnick’s music often explores combinations of digital sampling, interactive multimedia, and acoustic vocal, chamber and orchestral works. In the 1980s and ‘90s he developed the first integrated electronic arts graduate and undergraduate programs in the US, at Rensselaer Polytechnic Institute’s iEAR Studios, in Troy, NY. Rolnick’s innovation as an educator was to bring together the commonality of artistic creation across many disciplines, and this led to his varied work with filmmakers, writers, and video and media artists.
Though much of Rolnick’s work has been in areas which connect music and technology, and is therefore considered in the realm of “experimental” music, his music has always been highly melodic and accessible. Whether working with electronic sounds, acoustic ensembles, or combinations of the two, his music has been characterized by critics as “sophisticated,” “hummable and engaging,” and as having “good senses of showmanship and humor.”
Rolnick was sidelined for most of 2018, caring for his wife of 45 years who passed away that summer. In early 2019 he commemorated her memory with a solo laptop piece, Messages, which repurposes phone messages from before and during her illness.
In 2018 he wrote Declaration, a setting of the Declaration of Independence, for the School of Visual Arts in NYC. In 2017 Rolnick completed Deal With The Devil for pianist Kathleen Supové and violinist Jennifer Choi, and Mirages for solo pianist and computer.
In 2014 and 2015 Rolnick completed Oceans Eat Cities (2015), commissioned by the Tribeca New Music Festival, Cello Ex Machina (2015), Silicon Breath (2014), commissioned by the New York State Council on the Arts, Dynamic RAM & Concert Grand (2014), commissioned by the Fromm Foundation, and two solo laptop performance pieces, O Brother! and WakeUp. All of these, except Oceans Eat Cities, were on his 20th CD, Ex Machina, released by Innova in 2016. 2014 also saw the second digital release of Rolnick’s iFiddle Concerto, from the American Composers Orchestra, featuring violinist Todd Reynolds.
In 2012 and 2013 Rolnick wrote and recorded Gardening At Gropius House, commissioned by the Juilliard School and released on Innova. The CD also includes Anosmia, commissioned by the San Francisco Conservatory for the Hoefer Prize in 2010, for 3 singers, large ensemble and computer.
Neil Rolnick was born in 1947, in Dallas, Texas. He earned a BA in English literature from Harvard College in 1969. He studied musical composition with Darius Milhaud at the Aspen Music School, with John Adams and Andrew Imbrie at the San Francisco Conservatory, and with Richard Felciano and Olly Wilson at UC Berkeley, where he earned a PhD in musical composition in 1980. He studied computer music at Stanford with John Chowning and James A. Moorer, and worked as a researcher at IRCAM in Paris, France, from 1977 to 1979. From 1981-2013 he was a Professor of Music at Rensselaer Polytechnic Institute.