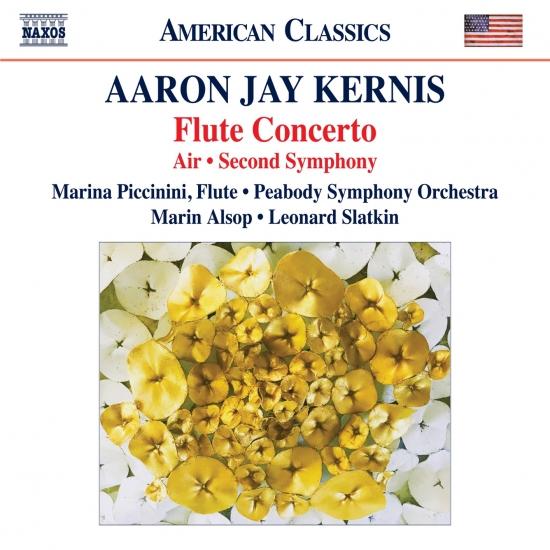 Pulitzer Prize- and GRAMMY® Award-winning composer Aaron Jay Kernis’s Flute Concerto was inspired by and written for Marina Piccinini. Its four movements explore darker and lighter elements in various dance forms, most of which begin calmly but end up spiraling out of control. Kernis describes the songlike Air as ‘a love letter to the flute.’ His Second Symphony was composed at the time of the Persian Gulf War and signified a powerful shift of tone in his music. Non-programmatic but linear and compact, it forms a part of his ‘War Pieces’ of 1991–95. Internationally renowned flutist Marina Piccinni’s rich artistic tapestry is woven from her multinational upbringing and vibrant, global perspective. Her extensive programs include premieres by Aaron Jay Kernis, John Harbison, Lukas Foss, and Paquito D’Rivera. She has appeared as a soloist with the Boston, Vienna, Tokyo, and Toronto National Symphonies, among others.
Marina Piccinini, flute
Peabody Symphony Orchestra
Leonard Slatkin, conductor
Marin Alsop, conductor 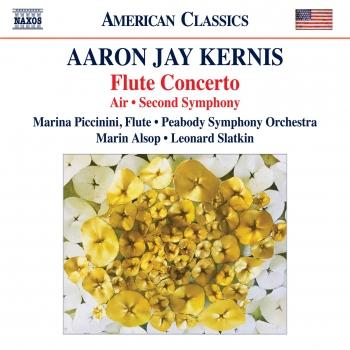 Marina Piccinini
Hailed by Gramophone as “the Heifetz of the flute,” Marina Piccinini is widely recognized across the world as a daring, dynamic artist with varied musical interests. She is internationally-acclaimed for her interpretive skills, intensely communicative performances, technical command, and powerfully magnetic stage presence, with a distinct and global perspective that informs her work as one of the most compelling advocates of both traditional and new works. Much sought after as a soloist, chamber musician, and recording artist, she has garnered special attention for her commitment to the music of our time and for expanding the repertoire of her instrument.
Growing up in a multi-national, multi-lingual household brimming with Italian, Brazilian, and Swiss cultural ties, and having resided in the far-flung locations of Sao Paulo, Zurich, Newfoundland, Toronto, New York City, and Vienna, the flutist brings the vibrant spirit of her rich heritage to all of her artistic endeavors. Ms. Piccinini’s artistic tapestry is also woven with threads both musical and non-musical, ranging from her love of Bachian intricacies and her talents in the visual arts, to her dedication to kung fu and Buddhist thought. As a 36th-generation Shaolin Fighting Monk, she relishes an ideology that inspires self-discovery, discipline, finding joy, and having no limits – all of which she brings to her instrumental artistry.
Ms. Piccinini’s repertoire is among the most diverse of today’s preeminent artists. Collaborating with some of the foremost living composers, she has commissioned and premiered works by John Harbison, Lukas Foss, Michael Colgrass, Paquito D’Rivera, Matthew Hindson, Michael Torke, David Ludwig, and Roberto Sierra, among many others. These projects have taken her across multiple continents, including a tour of her most recently commissioned work, a flute concerto written for her by Pulitzer Prize–winning composer Aaron Jay Kernis, which she premiered with the London and Rochester Philharmonics, Chautauqua Symphony, and Detroit Symphony, and recorded for Naxos with the Peabody Institute Orchestra conducted by Leonard Slatkin.
Recent and upcoming season highlights include a return engagement with the London Philharmonic conducted by Dennis Russell Davies for a recording of Miguel Kertsman’s Flute Concerto; the World Premiere of Kernis’ Air for flute and orchestra with the Korean Chamber Orchestra conducted by Patrick Gallois at Seoul Arts Center; tours with Musicians from Marlboro, including concerts at Carnegie Hall, Philadelphia’s Kimmel Center, The Smithsonian in DC, and Boston’s Gardner Museum; collaborations with the Brentano Quartet, the Beijing Guitar Duo, and with Vienna Philharmonic Principal Harpist Anneleen Lenaerts at the Aspen Music Festival and for Mozart’s Flute and Harp Concerto with conductor Bruno Weil and The Bruckner Orchester Linz, Austria and at the Moritzburg Festival in Dresden; a North American recital tour with pianist Andreas Haefliger at the Kennedy Center, Rockefeller University, Dallas’s Nasher Sculpture Center, and in Akron, Ohio; and appearances with guitarist Meng Su in San Francisco’s Herbst Theatre. Her trio, Tre Voci, appears at London’s Wigmore Hall, premiering a new work written for it by Toshio Hosokawa, and in Mexico City, Philadelphia, Boston, Los Angeles and beyond.
Acclaimed for her “intent, glittering musicianship” (Sunday Times [London]), she is a familiar and much-admired figure at the world’s foremost concert venues. She has appeared as soloist with the Boston, Hong Kong, Vienna, Vancouver, Tokyo, Saint Louis, Montreal, Toronto and National Symphonies, London and Rotterdam Philharmonics, and Ravenna Chamber Orchestra, and has worked with some of the world’s most celebrated conductors, including Esa-Pekka Salonen, Seiji Ozawa, Kurt Masur, Pierre Boulez, Myung-whun Chung, Gianandrea Noseda, Jukka-Pekka Saraste, and Alan Gilbert. She has also performed with the Tokyo, Mendelssohn, and Takács Quartets, NEXUS percussion ensemble, and the Beijing and Brasil Guitar Duos. A regular partner of pianists Andreas Haefliger and Mitsuko Uchida, she is a longtime Resident Artist at the Marlboro Festival, and performed at Japan’s Saito Kinen Festival at Ozawa’s personal invitation.
A prodigious recording artist, she can be heard on the Avie, Claves, and ECM labels, including Tre Voci’s debut CD of works by Tōru Takemitsu, Claude Debussy, and Sofia Gubaidulina; a DVD of Schoenberg’s Pierrot Lunaire from the Salzburg Festival, along with an accompanying documentary entitled Solar Plexus of Modernism; Bach’s complete flute sonatas and solo partitas with the Brasil Guitar Duo; the flute sonatas of Prokofiev and Franck with pianist Andreas Haefliger; and Belle Époque, with pianist Anne Epperson; sonatas by Bartók, Martinů, Schulhoff, Dohnányi, and Taktakishvili; and an acclaimed recording of her dazzling new arrangement of the Paganini Caprices (published by Schott Music).
Her intense commitment to education inspired her to create the Marina Piccinini International Masterclasses (MPIMC), which, after a decade at Baltimore’s Peabody Institute, has recently moved to the New World Center in Miami, launching an exciting new partnership with the New World Symphony. She is currently on the faculty of the Peabody Institute of Johns Hopkins University in Baltimore, and was formerly Professor at the Hochschule für Musik, Theater und Medien in Hannover, Germany. She also regularly gives masterclasses worldwide in conjunction with her performances.
Ms. Piccinini was the first flutist to win the coveted Avery Fisher Career Grant. Her career was launched when she won First Prizes in the CBC Young Performers Competition in Canada and the Concert Artists Guild International Competition in New York City.
Marina Piccinini was born into a family of distinguished scientists. She studied with Jeanne Baxtresser and Aurèle Nicolet, and received her Bachelor’s and Master’s degrees from The Juilliard School, where she worked with the legendary Julius Baker. She lives with her family in Vienna and New York.