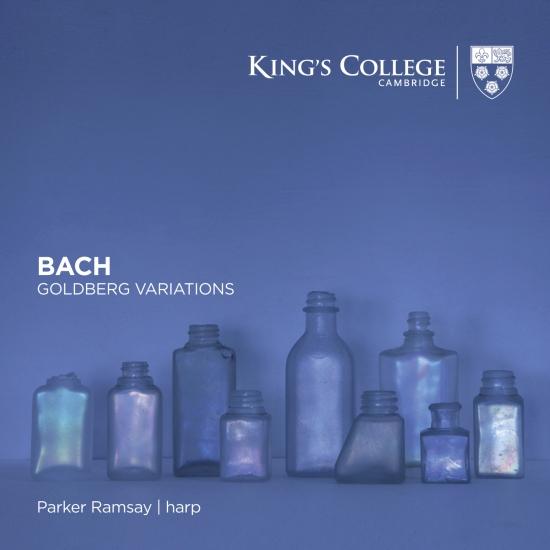 King's College presents Bach's iconic Goldberg Variations as arranged and performed by the harpist Parker Ramsay. The latest album from King's College follows critically acclaimed recordings by other alumni, including the cellist Guy Johnston and the organist Richard Gowers. Parker Ramsay's artistry is distinguished by it's breadth and crossing of instrumental boundaries and genres at the harp, organ and harpsichord. He was the first American to hold the post of Organ Scholar at King's, following in a long line of prestigious predecessors, and as a harpist specializes in repertoire for early harps and new music for the modern pedal harp. The album is accompanied by extensive notes by leading Bach scholar Burkhard Schwalbach and Pulitzer Prize winning music critic Tim Page.
Parker Ramsay, harp 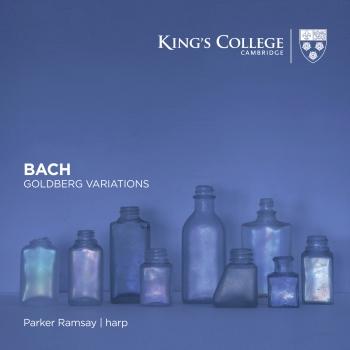 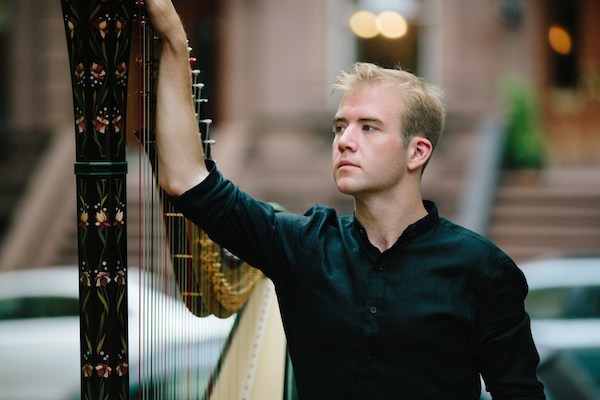 Parker Ramsay
Parker’s career eludes easy categorization, being unique in its integration of projects and performances on the harp, organ and harpsichord. Equally at home on modern and period instruments, he specializes in breathing new life into the canon as well as delving into new and underperformed works. He has premiered and workshopped works by composers across the United States, including Marc Satterwhite, Tengku Irfan and Saad Haddad and forthcoming projects include commissions by Tom Morrison, David Fulmer, Josh Levine and Marcos Balter. Parker also regularly performs continuo with ensembles around the word, including the Shanghai Camerata, the Academy of Sacred Drama, Teatro Nuovo and Apollo’s Fire. As a soloist, Parker works to challenge expand the current canon through historical performance. Forthcoming appearances with major ensembles include a performance of Mozart’s Concerto for Flute and Harp with the American Classical Orchestra, Debussy’s Danse sacrée et danse profane with Cramer Quartet and directing Apollo’s Fire in performances of Handel’s Concerto for Harp. Alongside gambist Arnie Tanimoto, Parker co-directs A Golden Wire, a period instrument ensemble devoted to French and English music from the seventeenth century.
Parker is also devoted to transcription as a vital discipline to expanding the scope and profile of the harp, particularly with the music of J.S. Bach. Dissatisfied with the false dichotomy that has arisen in the 20th century between the piano and harpsichord, Parker has sought to take inspiration from the examples of Glenn Gould and Gustav Leonhardt to ask how musicians move beyond mere questions of instrumentation and into deeper investigations of color and harmony. The harp can be seen as a happy medium, being a plucked instrument that is also sensitive to pressure and dynamic expression. His forthcoming recording of his transcription of the Goldberg Variations was recorded in the chapel of King’s College, Cambridge, where Parker studied and served as organ scholar while pursuing his bachelor’s degree in history. With the release of the album in September 2020, it is Parker’s hope that a different side of Bach might be witnessed: one in which the timbre of counterpoint rather formal or mathematical stricture might be most prominently showcased.
At age seventeen, Parker was awarded the organ scholarship at King’s College, Cambridge where he served under the direction of Stephen Cleobury. His tenure with the Choir of King’s College, Cambridge included performing for the Festival of Nine Lessons and Carols in 2012, as well as six international tours and four recordings. In 2014, he was awarded First Prize at the Amsterdam International Organ Competition. Parker has performed at the Concertgebouw in (Amsterdam), the Royal Albert Hall (London), the Musée d’Orsay (Paris), the National Center for the Performing Arts in (Beijing), Sejong Center for the Performing Arts (Seoul), Verizon Hall in (Philadelphia), Carnegie Hall and Alice Tully Hall (New York City).
Parker holds a bachelor’s from the University of Cambridge (UK), and a master’s degree and artist diploma in historical keyboards from Oberlin Conservatory. He also holds a master’s degree in harp performance from the Juilliard School, where he studied with Nancy Allen, principal harpist of the New York Philharmonic. His prior teachers include Isabelle Perrin (Head of Strings, Norwegian Academy of Music, Oslo), Sivan Magen (Principal Harp, Finnish Radio Symphony, Helsinki) and Skaila Kanga (Head of Harp Emerita, Royal Academy of Music, London). Parker also maintains a private teaching studio in New York, and presents and teaches masterclasses abroad, including institutions such as the Royal Academy of Music, Stanford University, Vanderbilt University, San Francisco Conservatory of Music and the Voralberger Landeskonservatorium. As a writer, Parker contributes to VAN Magazine (Berlin) and The Washington Post and maintains a blog, Harping On: Thoughts from a Recovering Organist. He lives in New York City.