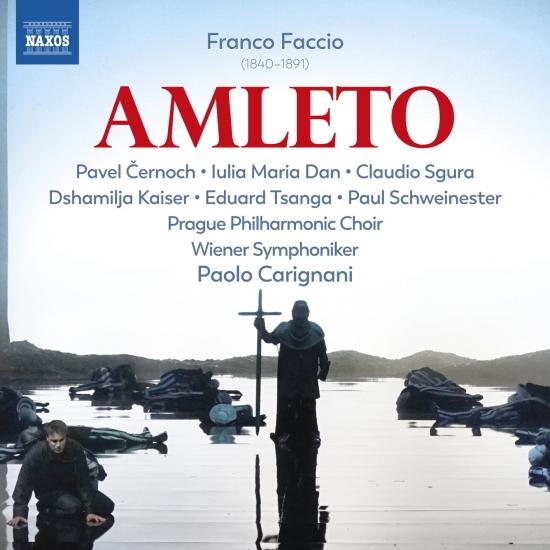 First performed in 1865, Amleto (Hamlet) represented a radical new development in Italian opera, the nuovo melodramma. Composer Franco Faccio and his librettist Arrigo Boito sought a greater degree of musical unity in staged productions and a more equal relationship between text and music.
This production “offers all an Italian-opera-lover could possibly desire” wrote the FAZ after the revival of this “forgotten gem” at the Bregenz Festival. The festival continued its rediscovery series with "Amleto/Hamlet", an opera by Verdi contemporaries Franco Faccio and Arrigo Boito, based on Shakespeare’s tragedy Hamlet. Premiered in 1865 in Genoa and restaged in 1871 at Milano’s La Scala, “Hamlet” was only revived in 2014 concertante in the US before its “triumphal rebirth” (Deutschlandradio Kultur) at the Bregenz Festival, where the opera was also recorded for the first time ever. Faccio, who conducted the first performance of Verdi’s Aida in Italy and the world premiere of Otello, and Boito, Verdi’s librettist of Otello and Falstaff, skillfully and effectively challenge the conventions of Italian opera, which they wanted to revitalize by infusing it with the spirit of Shakespeare’s drama. Anticipating the musical language of later Italian verismo composers, the opera combines lovely musical interludes with superb vocal writing. Heading a supreme cast, Pavel Černoch as Amleto delivers superbly, “using his colorful tenor skillfully to develop the transformation of the insecure youngling to the ice-cold avenger” (NZZ) and “granting the work large scale” (Abendzeitung). Under the baton of Paolo Carignani with the Vienna Symphoniker and Prague Philharmonic Choir “it carried terrific punch (The Telegraph)”. Olivier Tambosi’s “excellent staging served it well, with a clear focus on the high points (The Telegraph)”. “In the intermission and at the end there was vociferous enthusiasm of the audience for the late first encounter with this music” (Neue Musikzeitung). “There is a lot of exciting music to discover in this opera…What an amazing richness in ideas! This opera is worth to be rediscovered.” (SZ) // “Faccio’s opera is the one that should be performed, and if plans are not already afoot to bring it to the land of Shakespeare, they certainly should be.“ (The Telegraph) // “The Shakespeare year now has a breathtaking Shakespeare rediscovery. Yes, the musically convincing, pompous Hamlet opera does exist!” (FAZ)
Pavel Černoch, tenor
Claudio Sgura, baritone
Eduard Tsanga, bass
Paul Schweinester, tenor
Dshamilja Kaiser, mezzo-soprano
Iulia Maria Dan, soprano
Sébastien Soulès, bass
Bartosz Urbanowicz, baritone
Gianluca Buratto, bass
Jonathan Winell, tenor
Sabine Winter, soprano
Yasushi Hirano, bass
Prague Philharmonic Choir
Wiener Symphoniker
Paolo Carignani, conductor