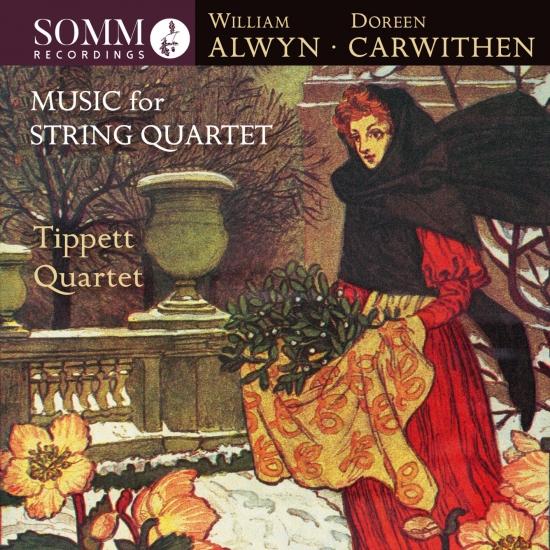 SOMM RECORDINGS’ coupling of string quartets by teacher and pupil William Alwyn and Doreen Carwithen offers a revealing glimpse – in illuminating performances by the Tippett Quartet – into the relationship between a master composer and his promising student who became one of the great ‘what might have beens’ of British 20th-century music.
Alwyn’s position as a leading British composer was cemented by his prolific output (totalling more than 500 scores) while Carwithen abandoned composing altogether to act as Alwyn’s amanuensis and secretary, eventually becoming his wife in 1975. Composed in 1948, Alwyn’s atmospherically charged Three Winter Poems are charming works that benefit from the evocative, emotional immediacy that characterised his cinema scores.
His last major work, 1984’s String Quartet No.3, was a valedictory celebration of what the composer called “this most perfect of mediums”. Unexpectedly animated (Alwyn was 79 at the time), it ends, says the William Alwyn Foundation’s Andrew Knowles in his authoritative booklet notes, “in peaceful serenity, providing a moving and fitting swansong to Alwyn’s composing career”.
While the prolific Alwyn composed 16 string quartets, Carwithen produced just two, both early in her career, both displaying, says Knowles, “a remarkably sound technique and a natural sense of warm emotion and drama”, and both heard here in only their second recording.
Composed in 1945 while she was still a student at the Royal Academy of Music, the String Quartet No.1 is a work of striking contrasts, the restless key signatures, variegated rhythms and stretched dynamics of the first movement complemented by its chiaroscuro-like companion conveying, by turns, moods of gentle tranquillity, passion and austerity. From 1950, Carwithen’s Second String Quartet is also an exercise in contrast, although more vividly realised and acutely articulated.
The Tippett Quartet’s earlier recording for SOMM of Alwyn’s String Quartets Nos.10-13 (SOMMCD 0165) was praised by Gramophone for its “really excellent playing” and hailed as a disc that “constitutes essential listening”.
Tippett Quartet 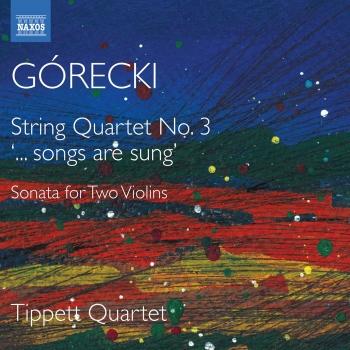 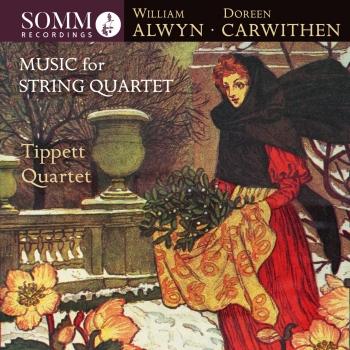 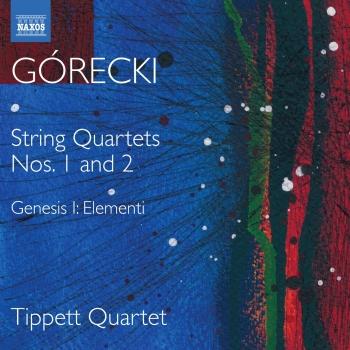 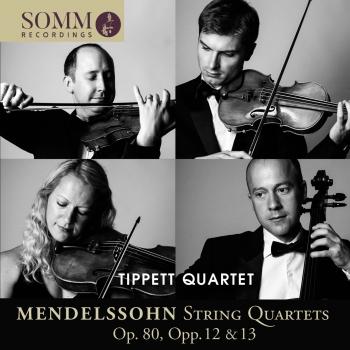 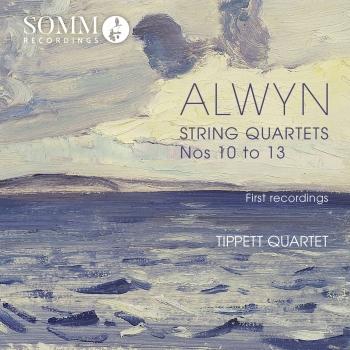 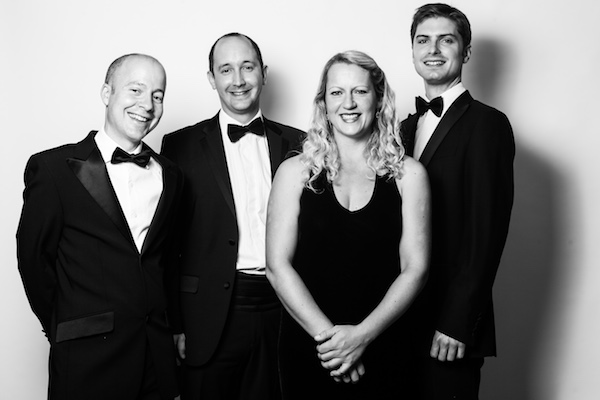 Tippett Quartet
For over a decade and a half, the celebrated Tippett Quartet has delighted critics and audiences alike with its animated, virtuosic performances and it’s inspired and attractive programming. They have performed at the BBC Proms, Cheltenham Festival, Snape Proms and numerous festivals throughout the UK and abroad, including tours of Europe, Canada and Mexico. The quartet regularly appears at Kings Place, Purcell Room, Wigmore Hall, Queen Elizabeth Hall and Bridgewater Hall and frequently performs on BBC Radio 3. Alongside a busy touring schedule, the Tippett Quartet pursues a keen interest in educational work with both schools and universities and was Ensemble in Residence at Sidney Sussex College, Cambridge University for 2012-13. In September 2015 they began an exciting new residency at Royal Holloway University, London.
Their broad and diverse repertoire highlights the Tippett Quartet’s unique versatility. They are equally at home with the giants of the classical world as they are with great Hollywood composers. Their impressive catalogue of over twenty releases have not only topped the classical charts but have also entered the pop charts and received universal critical acclaim. They have recorded for Naxos, EMI Classics, Signum, Classic FM, Guild, Real World, Dutton Epoch and Tocatta Classics. The quartet has given numerous world and UK premieres including works by John Adams, Howard Goodall and Stephen Dodgson. 2013 saw them rediscover Gustav Holst’s Fantasy on British Folk Songs which, with the help of the eminent musicologist Roderick Swanston, they were able to complete and give a world premiere on BBC Radio 3. They have also worked with Peter Maxwell-Davies for a performance of his 9th Quartet at the South Bank, with Anthony Payne on his Quartet No.1 for a live BBC broadcast from Spitalfields Festival, and Hugh Wood on his String Quartet No.3 at the Presteigne Festival.
They have had the great pleasure of collaborating with inspirational soloists such as Kathryn Stott, Craig Ogden, Stephanie Gonley, Lawrence Power, Melvin Tan, Nick Van Bloss, Julian Bliss and Ashley Wass. In 2011 they celebrated the anniversary of the iconic film composer Bernard Herrmann by commissioning an arrangement of Psycho and performing it alongside his clarinet quintet Souvenir de Voyages and Echoes in a series of concerts and radio broadcasts. They had the great pleasure of collaborating with Herrmann’s widow Norma Herrmann on many occasions.
The Tippett Quartet have also performed with the Royal Ballet at Covent Garden and have premiered a newly written film score for Alfred Hitchcock’s 1927 silent film classic The Lodger. In 2014 they started a collaboration with some of the UK’s finest Jazz musicians with the launch of their ‘Close To You’ project – a tribute to the album that Frank Sinatra made with the Hollywood String Quartet. In 2015 they are now continuing this collaboration with “Hollywood Romance” featuring singer and broadcaster Claire Martin OBE.