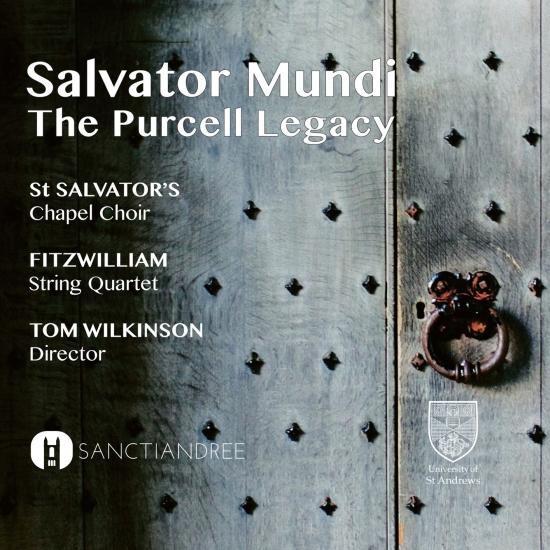 The University of St Andrews launches its new CD label, Sanctiandree - profiling St Salvator’s Chapel Choir under the direction of University Organist, Tom Wilkinson - with an album of music composed and influenced by Henry Purcell, ‘Salvator Mundi: The Purcell Legacy.
The label takes its name from 15th century references to the choristers at St Andrews University, the Choristi Sanctiandree. Choral singing has been a key feature of student life at the University since its foundation in 1413, when all students were obliged to sing in the chapel. Today’s chapel choir members are all supported by choral scholarships, and the choir has enjoyed an outstanding renaissance during the last five years under the directorship of Tom Wilkinson.
‘Salvator Mundi’ features St Salvator’s Chapel Choir and the Fitzwilliam String Quartet in English church music dating from between 1650 and 1800. In addition to music by Henry Purcell, John Blow and Jeremiah Clark, the release features the world premiere recording of the anthem ‘Hear Me O God’ by William Jackson of Exeter (1730-1803). His work was discovered in the University of St Andrews’ Special Collections where it forms part of Gerald Finzi’s private music collection, left to the University on the composer’s death in 1956. Tom Wilkinson was immediately intrigued by the discovery and says, “William Jackson of Exeter was an organist and composer active in the late 18th century. It is possible to trace a direct teacher/pupil lineage all the way to Purcell, a century earlier. His music, unjustly neglected today, is charming, quirky, and may be the earliest English music to exhibit the Classical style.”
"the intimacy of the setting ideally complements Wilkinson's unfussy, rhythmically driven readings. A bouyant account of Maurice Green's famous harvest anthem is a highlight, as are Wilkinson's own neatly turned organ solos…three fascinating anthems by William Jackson of Exeter are enthusiastically embraced by these performers…[and] offer an intriguing glimpse into a neglected period in English church music." (Gramophone Magazine)
"the striking thing about Jackson’s harmless anthems is their cheerful classicism, whereas the other music here, starting from Humfrey’s superb O Lord my God and Greene’s Thou visitest the earth, is much deeper...attractive performances by the university choir at St Andrews...displaying good choral blend but uneven solo singing under Tom Wilkinson." (The Observer)
St Salvator’s Chapel Choir
Fitzwilliam String Quartet
Tom Wilkinson, director