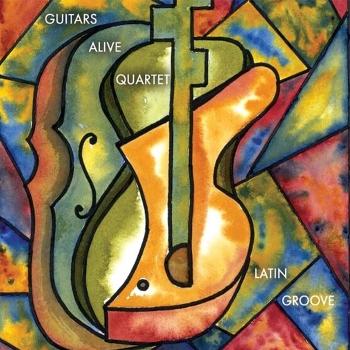 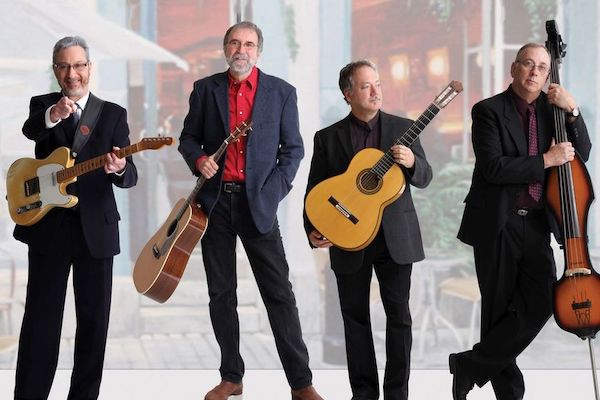 The Guitars Alive Quartet
is a unique ensemble. Where else do you get fantastic performers all playing completely different types of guitars? Philip Candelaria plays Latin-classical guitar, Gary DiSalle electric guitar and Paul Dunn acoustic guitar and dobro. All are well-known recording artists, and virtuoso performers in a wonderful variety of musical styles. They are joined by bassist Tom Linklater for concerts that feature Spanish & Latin arrangements, along with Blues, slide guitar, Bluegrass, Ragtime, Swing, Jazz, and original music.
Philip Candelaria
As a soloist, Philip Candelaria has performed throughout North, Central and South America, in the Middle East, and in Europe. He toured with Paul Dunn in Central America and with the Canadian Guitar Quartet in South America, Europe, throughout the USA and Canada. Philip has 10 recordings to his credit, which have been described as “dazzling” (Canada Music Magazine), “distinguished” (High Fidelity Magazine), and “masterful” (GFA Soundboard). Philip taught guitar at Cambrian College for 31 years before retiring, and now teaches at the University of Ottawa. Besides teaching and performing with the Guitars Alive Quartet, Candelaria is often requested to adjudicate guitar classes in music festivals from local to international levels.
Gary DiSalle
With a musical career spanning 45 years, Gary DiSalle is recognized as one of Northern Ontario’s premier guitarists. Gary is well known for his versatility on the instrument, having worked in a variety of genres including blues, jazz, R&B, pop, folk and country. He has appeared on literally hundreds of recordings and has performed throughout Canada & the United States with a host of internationally renowned artists. Gary holds Bachelor’s Degrees in Music and in Education and has taught music for both the York Region and Rainbow District School Boards. In addition to his work with The GAQ, Gary continues to write, record and perform with a host of Northern Ontario artists, including jazz vocalist/pianist Sarah Craig and renowned Canadian singer/songwriter Kevin Closs.
Paul Dunn
is a roots music man! Whether playing a delta blues piece by Robert Johnson, an early Chicago shuffle, a ragtime guitar strut or one of his own well crafted songs, Paul does it with class. He plays finger style guitar as well as bottleneck and is equally at home with an Appalachian fiddle tune adapted for steel string guitar. Paul appeared on a 70’s compilation record called “Northfolk” and on a 90’s acoustic blues disc entitled “Rooftop Blues” which featured harmonica player “Sunny” Fournier, and was produced by the venerable Ken Whitely. This artist has performed with Valdy, Mauricio Montecinos, and Northern Ontario singer songwriter Kevin Closs. Now retired, Paul previously taught at MacLeod public school in the Rainbow school board for many years.
Tom Linklater
Montreal born Tom Linklater has been the “go to” bass player for artists on the Sudbury music scene for over 40 years. Equally at home on electric and acoustic stand-up bass, Tom has worked in every musical genre from country, to blues, to rock to gypsy jazz. In addition to working in The Guitars Alive Quartet, Tom is co-founder and bass player with the jazz combo Sunnyside Jazz. Along with Paul and Gary, Tom also performs with singer/songwriters Sarah Craig & Jim Matt.
The Guitars Alive Quartet has headlined the annual “Guitars Alive” event in Sudbury three times and performed throughout Ontario. They released their debut CD “Latin Café” in 2013 at the festival that gave them their name.