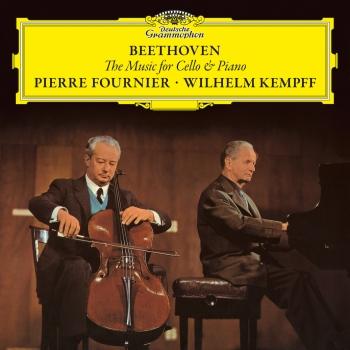 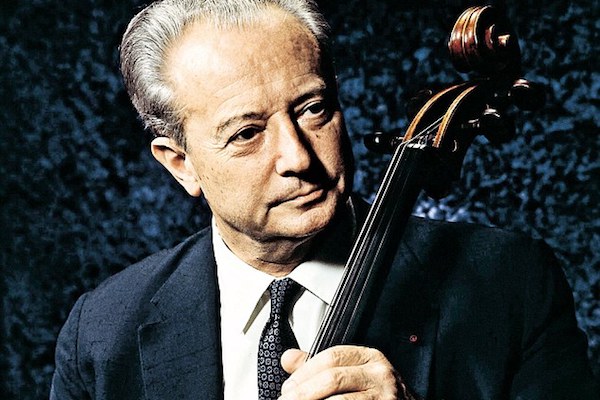 Pierre Fournier
(1906-1986) was born in Paris on June 24, and known in his lifetime as "the aristocrat of cellists," because of his lyrical playing, and for his impeccable artistic sensitivity.
Fournier was the son of a French army general, and as a child was taught piano by his mother. At the age of nine he suffered a mild case of polio, and lost some of the dexterity in his legs and feet. No longer able to master the use of the piano pedals, he searched for another musical instrument, and turned to the cello.
He quickly made good progress on his new instrument, and was able to win entrance to the Paris Conservatoire, where he became a pupil of Paul Bazelaire, and later Anton Hekking. He graduated at the age of seventeen, in the year 1923. Maurice Marechal called him "the cellist of the future." Even at such a young age, Fournier had tremendous virtuosity, and was famous for his bowing facility. Fournier was a friend of another great French cellist, Tortelier. Once, meeting backstage after a recital by Tortelier, Pierre said to him, "Paul, I wish I had your left hand." Tortelier replied, "Pierre, I wish I had your right arm!"
Fournier became well known in 1925 after a successful performance with the Edouard Colonne Orchestra in Paris, and began to give concerts all over Europe. Fournier played with all the great musicians of his time, including Cortot, Thibaud, Furtwangler, Karajan and Kubelik. Together with Artur Schnabel, Szigeti and Primrose he recorded nearly all of the chamber music of Brahms and Schubert. Unfortunately the acetates on which the BBC recorded the series deteriorated before they could be copied to a more durable medium.
In the years 1937-1939 Fournier directed the cello class at the Ecole Normale, and from 1941-1949 also at the Paris Conservatoire.
Fournier made his first tour of the USA in 1948 to great acclaim in New York and Boston. Virgil Thomson wrote in the New York Herald Tribune, "I do not know his superior among living cellists, nor any...who give one more profoundly the feeling of having been present at music-making." His performing career occupied more and more of his time, and he had to resign from his teaching post in Paris. In 1959 he appeared for the first time in Moscow, where he played most of the standard concertos of the cello repertoire.
He enjoyed modern music, as well as classical. Many modern composers wrote works for him, including Martinu, Martinon and Poulenc. As a teacher Fournier insisted that his students develop a smooth tone, and a high elbow for the right arm. He believed that the Sevcik violin exercises were valuable for cellists who wanted to perfect bowing technique.
In 1956 he made his home with his family in Switzerland, but retained his French citizenship. His son, Jean Pierre Fournier was a fine pianist, and often performed cello/piano sonatas together with his father. In 1963 he was made a member, and a year later an officer, of the French Legion of Honor.
Wilhelm Kempff
born 1895 in Brandenburg, grew up in Potsdam. During school he studied at the Berlin Music University, where he became student of Heinrich Barth, the pupil of Tausig and Bülow (piano). In 1918 he debuted at the Berlin Philharmonic under Arthur Nikisch. His first solo tour abroad led Wilhelm Kempff in 1919 to Finland and Sweden, in 1920 his first record recordings appeared. Wilhelm Furtwängler conducted in 1924 the world premiere of the second Symphony by Wilhelm Kempff. In Potsdam 1930 he played the first of his concert cycles totalling more than 50 with Beethoven's 32 Piano Sonatas. From Wilhelm Kempff comes the well-known citation: "I consider myself lucky to live in the age of Bechstein." After the end of the war he once again presented concerts worldwide. His annual Beethoven interpretation courses in the southern Italian city Positano were famous. Wilhelm Kempff died 1991 in Positano.