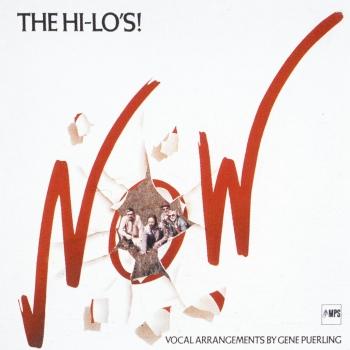 The Hi-Lo's
One of the most innovative jazz/pop vocal groups of all time, the pioneering Hi-Lo's influenced countless pop, R&B, and doo wop groups from the '50s right up to the present.
They formed in December 1953 when Gene Puerling of Milwaukee and friend Bob Strasen met Clark Burroughs and Bob Morse. The latter two were vocalists with the Encores, the vocal group for the Billy May Band. When Billy's band stopped traveling, the Hi-Lo's were born. Reportedly named because of their extreme vocal and physical ranges (Strasen and Morse were tall, Gene and Clark were short), the Hi-Lo's practiced at Clark and Gene's Los Angeles apartment, refining their revolutionary voicings. The group were themselves influenced by such artists as The Four Freshmen, The Modernaires, and Mel Torme's Mel-Tones.
With Clark on lead, Bob and Bob on tenors, and Gene on bass, the Hi-Lo's fractured the traditional definition of vocal group structure with a tonal blend rarely equaled by any quartet.
Eugene Thomas (Gene) Puerling (March 31, 1929 - March 25, 2008)
Born in Milwaukee, Wisconsin. Gene Puerling became a disc jockey after graduating from South Division High School. The talented singer-arranger has always had a head for business, owning a profitable popcorn concession while working around Milwaukee as a freelance singer. Gene also organized two vocal groups while still living in the mid-west, "The Double-Daters" and "The Honey Bees." Gene's favorite singers, at one time, were Mel Tormé and the Four Freshmen.
Robert B. (Bob) Morse (July 27, 1923 - April 27, 2001)
Born in Pasadena, California. Bob came from a very musical family. One brother, Dick Morse, played trumpet for Stan Kenton another arranged for Johnny Richards. Bob was playing alto saxophone at the age of 6 and took up bass in 1947. He also sang with brother Burton Morse's band in 1946 and recorded with the Encores and Billy May. In addition to being a fine singer and musician, Bob was an accomplished artist. A graduate of San Fernando High School, he attended UCLA, Chouinard Art Institute, and the Westlake College of Music. A former enlistee in the Navy, Bob spent his free time reading, sketching, and playing tennis. His favorite personal solo at one time was "Skylark" and his favorite singer was Billie Holiday.
Clark Burroughs (March 3, 1930 - )
Born in Los Angeles, California. Clark Burroughs is the fellow in the group with the fabulous vocal range. On several of the Hi-Lo's arrangements, Clark hits a G over High C. Clark met Gene Puerling after he left the Billy May Orchestra. A graduate of Powers High School, Clark attended Loyola University. In addition to his singing career, he also worked as an actor, record producer, and vocal arranger.
Don Shelton (August 28, 1934 - )
Born in Tyler, Texas. A Texas-born reed player (Don can play clarinet, flute, and alto saxophone), Don studied music with his father, who was also a saxophonist. He attended the Navy School of Music, Washington, D.C. from 1952 to 1955. Don later moved to L.A. in 1956 to attend UCLA. There he became interested in group singing and joined the Trends, who sang on Rusty Draper's radio show. Don also worked around Los Angeles with Bob Florence and numerous other bands. In June of 1959, Don Shelton replaced the departing Bob Strasen. He underwent a tough set of auditions for the Hi-Lo's and came out on top. Don's favorite singers at one time were Peggy Lee, Nat "King" Cole, and Frank Sinatra.