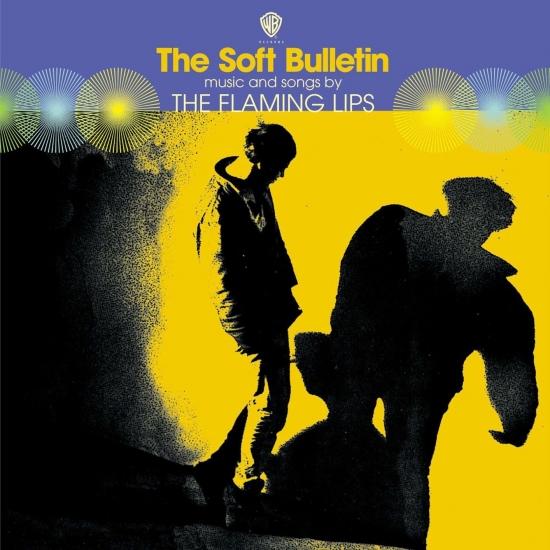 Info for The Soft Bulletin (Remastered)

With their multi-disc opus „Zaireeka“ (four CDs meant to be played simultaneously on four different players), the Flaming Lips radically expanded the scope of their melancholy psychedelia, as pop tunes became modernist soundscapes, part-Pink Floyd, part-John Cage. Obviously, the experience greatly influenced the band's direction, because on „The Soft Bulletin“ the Lips again scrap the guitar-bass-drum rock standard, sculpting instead a huge hi-fi record akin to a post-modern pet sounds with the vision of a humanist OK computer.
Long-time producer and Mercury Rev studio savant Dave Fridmann helps with the completion of a Spectorian sonic canvas, full of epic gestures (glorious sweeping strings arrangements) and brilliant details (well-placed thematic samples). The music adds a context of grandeur to Coyne's lyrics of Zen and the cosmic joke. Songs like "Superman," "Feeling Yourself Disintegrate" and a half-dozen others, hint at the hopelessness of life's outcome while maintaining a sense of faith (a common Lips theme). „The Soft Bulletin“ raises such pre-millennial realist/fantasy notions in the midst of a 90s "Tomorrow Never Knows," and in the process setting a high bar for the last great rock-era records of the 20th century.
„So where does a band go after releasing the most defiantly experimental record of its career? If you're the Flaming Lips, you keep rushing headlong into the unknown -- The Soft Bulletin, their follow-up to the four-disc gambit Zaireeka, is in many ways their most daring work yet, a plaintively emotional, lushly symphonic pop masterpiece eons removed from the mind-warping noise of their past efforts. Though more conventional in concept and scope than Zaireeka, The Soft Bulletin clearly reflects its predecessor's expansive sonic palette. Its multidimensional sound is positively celestial, a shape-shifting pastiche of blissful melodies, heavenly harmonies, and orchestral flourishes; but for all its headphone-friendly innovations, the music is still amazingly accessible, never sacrificing popcraft in the name of radical experimentation. (Its aims are so perversely commercial, in fact, that hit R&B remixer Peter Mokran tinkered with the cuts "Race for the Prize" and "Waitin' for a Superman" in the hopes of earning mainstream radio attention.) But what's most remarkable about The Soft Bulletin is its humanity -- these are Wayne Coyne's most personal and deeply felt songs, as well as the warmest and most giving. No longer hiding behind surreal vignettes about Jesus, zoo animals, and outer space, Coyne pours his heart and soul into each one of these tracks, poignantly exploring love, loss, and the fate of all mankind; highlights like "The Spiderbite Song" and "Feeling Yourself Disintegrate" are so nakedly emotional and transcendentally spiritual that it's impossible not to be moved by their beauty. There's no telling where the Lips will go from here, but it's almost beside the point -- not just the best album of 1999, The Soft Bulletin might be the best record of the entire decade.“ (Jason Ankeny, AMG)
Wayne Coyne, vocals, keyboards, guitar, theremin
Michael Ivins, bass, keyboards, backing vocals
Steven Drozd, guitar, harmony vocals, keyboards, synthesizers, bass, drums, xylophone, glockenspiel, unison tuned pedal steel guitar
Recorded April 1997 – February 1999 at Tarbox Road Studios, Cassadaga, New York
Engineered by Dave Fridmann, The Flaming Lips
Produced by The Flaming Lips, Dave Fridmann, Scott Booker
Digitally remastered

Seeing The Unseeable: The Complete Studio Recordings Of The Flaming Lips 1986-1990 (Remastered)

Scratching The Door: The First Recordings Of The Flaming Lips (Remastered)

The Dark Side of the Moon (Remastered)

The Flaming Lips and Stardeath And White Dwarfs

Transmissions from the Satellite Heart (Remastered)

Hit to Death in the Future Head (Remastered)

At War With the Mystics (Remastered)

With A Little Help From My Fwends

The Flaming Lips are an American rock band, formed in Norman, Oklahoma in 1983.
Melodically, their sound contains lush, multi-layered, psychedelic rock arrangements, but lyrically their compositions show elements of space rock, including unusual song and album titles—such as "Psychiatric Explorations of the Fetus with Needles", "Free Radicals (A Hallucination of the Christmas Skeleton Pleading with a Suicide Bomber)" and "Yeah, I Know It's a Drag... But Wastin' Pigs Is Still Radical". They are also acclaimed for their elaborate live shows, which feature costumes, balloons, puppets, video projections, complex stage light configurations, giant hands, large amounts of confetti, and frontman Wayne Coyne's signature man-sized plastic bubble, in which he traverses the audience. In 2002, Q magazine named The Flaming Lips one of the "50 Bands to See Before You Die".
The group recorded several albums and EPs on an indie label, Restless, in the 1980s and early 1990s. After signing to Warner Brothers, they scored a hit in 1993 with "She Don't Use Jelly". Although it has been their only hit single in the U.S., the band has maintained critical respect and, to a lesser extent, commercial viability through albums such as 1999's The Soft Bulletin (which was NME magazine's Album of the Year) and 2002's Yoshimi Battles the Pink Robots. They have had more hit singles in the UK and Europe than in the U.S. In February 2007, they were nominated for a 2007 BRIT Award in the "Best International Act" category. By 2007, the group garnered three Grammy Awards, including two for Best Rock Instrumental Performance.
On October 13, 2009 the group released their latest studio album, titled Embryonic. On December 22, 2009, the Flaming Lips released a remake of the 1973 Pink Floyd album The Dark Side Of The Moon. In 2011, the band announced plans to release new songs in every month of the year, with the entire process filmed.