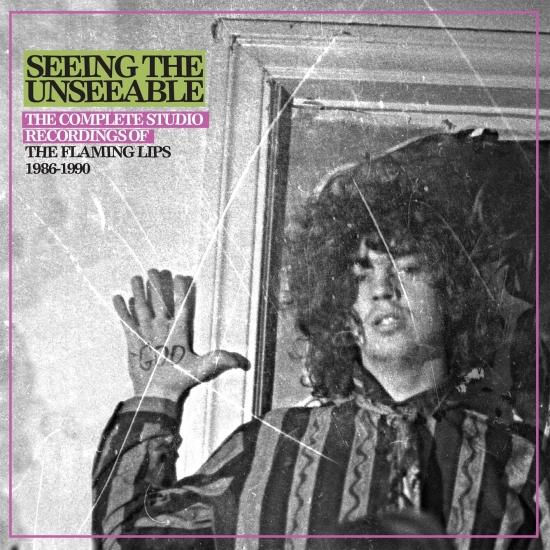 Info for Seeing The Unseeable: The Complete Studio Recordings Of The Flaming Lips 1986-1990 (Remastered)

The Flaming Lips have pushed the envelope and bent boundaries for more than two decades with the band's Grammy®-winning music and ground-breaking concerts. This year, Rhino and Warner Bros. Records will celebrate Oklahoma's most famous freaks with an ambitious reissue program, kicking off with two releases that spotlight the joyous weirdness the band recorded for Restless Records before signing with Warner Bros. in 1991.
It begins with SCRATCHING THE DOOR: THE FIRST RECORDINGS OF THE FLAMING LIPS, a single-disc compilation that features music recorded by the band's original lineup. The 19-track collection will be available on April 20 for $14.98. It will be followed by SEEING THE UNSEEABLE: THE COMPLETE STUDIO RECORDINGS OF THE FLAMING LIPS 1986-1990, a six-album set that includes their four Restless Records studio albums and two albums of rarities.
All of the music on SCRATCHING THE DOOR and SEEING THE UNSEEABLE has been remastered from original sources by the band's longtime musical foil and producer, David Fridmann with help from the Lips' Wayne Coyne and Michael Ivins.
SCRATCHING THE DOOR highlights tracks recorded by The Flaming Lips' original line-up, which featured Wayne Coyne's brother Mark on vocals. The album includes the band's first and second cassette demos, in addition to The Flaming Lips first self-released EP, which has been remastered from the original 1/4" analog tape master. This marks the first time all of these recordings have been collected together on a single release. Among the other featured tracks are covers of The Who's "Anyway, Anyhow, Anywhere," Led Zeppelin's "Communication Breakdown" and the theme song from the 1960's Batman television series, which previously appeared on Rykodisc's 2002 compilation, Finally The Punk Rockers Are Taking Acid.
SEEING THE UNSEEABLE brings back into print (physically - they are available digitally) all four studio albums that the band released on Restless Records between 1984 and 1990: Hear It Is (1986), Oh My Gawd!!!...The Flaming Lips (1987), Telepathic Surgery (1989) and In A Priest Driven Ambulance (With Silver Sunshine Stares) (1990). All of these have been remastered from the original 1/4" analog tape masters and include sonic treasures such as "Godzilla Flick," "Unconsciously Screaming," "One Million Billionth Of A Millisecond On A Sunday Morning" and their cover of the classic "(What A) Wonderful World."
The Flaming Lips
Digitally remastered

Seeing The Unseeable: The Complete Studio Recordings Of The Flaming Lips 1986-1990 (Remastered)

Scratching The Door: The First Recordings Of The Flaming Lips (Remastered)

The Dark Side of the Moon (Remastered)

The Flaming Lips and Stardeath And White Dwarfs

Transmissions from the Satellite Heart (Remastered)

Hit to Death in the Future Head (Remastered)

At War With the Mystics (Remastered)

With A Little Help From My Fwends

The Flaming Lips are an American rock band, formed in Norman, Oklahoma in 1983.
Melodically, their sound contains lush, multi-layered, psychedelic rock arrangements, but lyrically their compositions show elements of space rock, including unusual song and album titles—such as "Psychiatric Explorations of the Fetus with Needles", "Free Radicals (A Hallucination of the Christmas Skeleton Pleading with a Suicide Bomber)" and "Yeah, I Know It's a Drag... But Wastin' Pigs Is Still Radical". They are also acclaimed for their elaborate live shows, which feature costumes, balloons, puppets, video projections, complex stage light configurations, giant hands, large amounts of confetti, and frontman Wayne Coyne's signature man-sized plastic bubble, in which he traverses the audience. In 2002, Q magazine named The Flaming Lips one of the "50 Bands to See Before You Die".
The group recorded several albums and EPs on an indie label, Restless, in the 1980s and early 1990s. After signing to Warner Brothers, they scored a hit in 1993 with "She Don't Use Jelly". Although it has been their only hit single in the U.S., the band has maintained critical respect and, to a lesser extent, commercial viability through albums such as 1999's The Soft Bulletin (which was NME magazine's Album of the Year) and 2002's Yoshimi Battles the Pink Robots. They have had more hit singles in the UK and Europe than in the U.S. In February 2007, they were nominated for a 2007 BRIT Award in the "Best International Act" category. By 2007, the group garnered three Grammy Awards, including two for Best Rock Instrumental Performance.
On October 13, 2009 the group released their latest studio album, titled Embryonic. On December 22, 2009, the Flaming Lips released a remake of the 1973 Pink Floyd album The Dark Side Of The Moon. In 2011, the band announced plans to release new songs in every month of the year, with the entire process filmed.