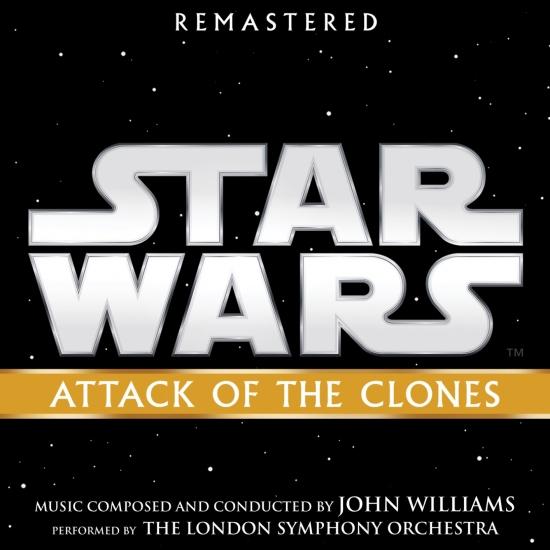 Info for Star Wars: Attack of the Clones (Remastered)

40th Anniversary-Edition: Walt Disney Records releases for the first time a 192kHz, 24bit edition of the remastered original motion picture soundtrack for Star Wars: "Attack of the Clones".
Originally released alongside the movie in 2002 by Sony Classical, the original motion picture soundtrack to Star Wars Episode II: Attack of the Clones' 13-track score from legendary composer John Williams has been remastered to maximize the recording's dynamic range.
There's never been anything quite like the symphonic film music series that John Williams has forged for George Lucas's sprawling Star Wars saga. By the time the sixth chapter rolls around, Williams will have created a body of work that spans fully 30 years of his career, a virtual Ring Cycle of sci-fi/fantasy soundtrack music. While Attack of the Clones again achieves the high standards of its predecessors, it also succeeds by both forging some rewarding new musical themes at the same time it begins to bring the galactic fable full circle. The budding relationship between now-teenaged Anakin Skywalker and Amidala/Padme is informed by "Across the Stars--Love Theme from Attack of the Clones," a grand romantic motif that's infused with a subtle melancholy that hints at the tragedy that must ultimately befall the young lovers. The composer's mastery of idiom and color serve him especially well in the action cues, infusing "Zam the Assassin and the Chase Through Coruscant" and "Jango's Escape" with bracing doses of 20th-century modernism and its inherent rhythmic fury performed, as always, by the London Symphony Orchestra. Williams also incorporates the "Force" and "Jedi" themes of the first SW trilogy sparingly, before "Confrontation with Count Dooku and Finale" completes the musical/thematic tapestry by interweaving The Empire Strikes Back's menacing "Imperial March" with both the new "Love Theme" and the Phantom Menace's dramatic choral showcase "Duel of the Fates." This sweeping denouement should rightfully take its place among the saga's most compelling musical sequences. Purists may grouse at the obviously abridged music here, but given history a complete/ultimate edition of the score can't be far behind. This soundtrack is issued with one of four different, collectible covers.
Digitally remastered