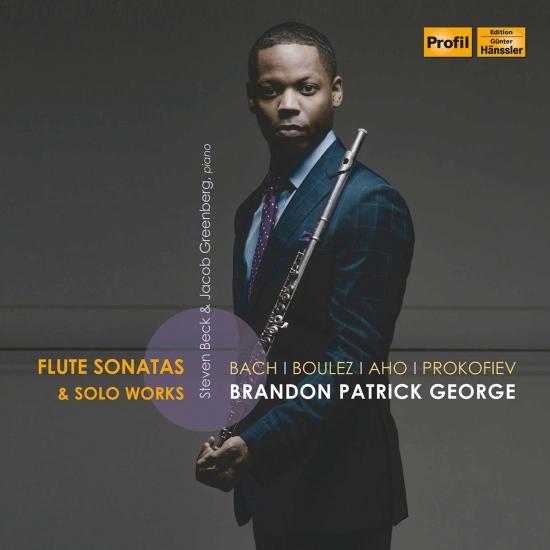 Flautist Brandon Patrick George describes his debut album as a dialogue between the past and the future. It is indeed quite a leap in time from Johann Sebastian Bach (1685-1750) to the Finnish composer Kalevi Aho, born in 1949 yet he has included works for solo flute by both composers on this recording. There are also two important chamber works for a flute and piano duo which represent milestones in the repertoire: a sonata by Sergei Prokofiev (1891-1953) and a sonatina by Pierre Boulez (1925-2016) and so this release represents a walk through musical history spanning 300 years. Brandon Patrick George is the flutist of the Grammy®-nominated Imani Winds, and has performed with many of the worlds leading ensembles including the Los Angeles Philharmonic, Pittsburgh Symphony Orchestra, Orpheus Chamber Orchestra, and the International Contemporary Ensemble (ICE).
Brandon Patrick George, flute
Steven Beck, piano
Jacob Greenberg, piano 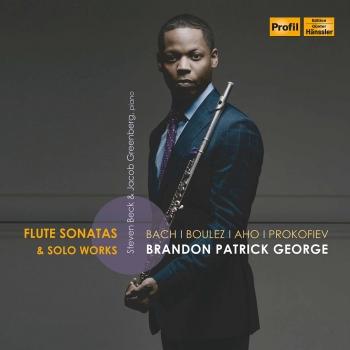 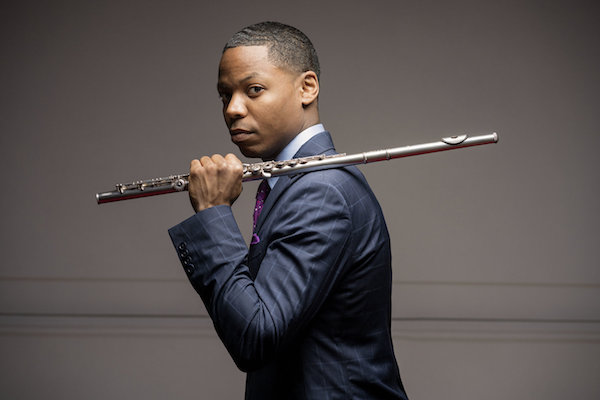 Brandon Patrick George
is the flutist of the Grammy®-nominated Imani Winds, and has performed with many of the world’s leading ensembles including the Los Angeles Philharmonic, Pittsburgh Symphony Orchestra, Orpheus Chamber Orchestra, and the International Contemporary Ensemble (ICE). He has appeared at Alice Tully Hall, Carnegie Hall, Elbphilharmonie, the Kennedy Center, Metropolitan Museum of Art, Dresden Music Festival, and the Prague Spring Festival. An avid chamber musician, Brandon has collaborated with members of the Gryphon Trio, New York Philharmonic, Jasper String Quartet, and has performed live on New York's WQXR with harpist Bridget Kibbey. He has been hailed by The New York Times as “the elegant Brandon Patrick George”, as a “virtuoso” by The Washington Post, and called a “knockout musician with a gorgeous sound” by The Philadelphia Inquirer.
With the Los Angeles Philharmonic, Brandon has performed at Walt Disney Concert Hall, and at the Hollywood Bowl, under many conductors including Music Director Gustavo Dudamel, Karina Canellakis, Ludovic Morlot, and John Williams. Brandon has toured with the International Contemporary Ensemble (ICE), appearing at the Brooklyn Academy of Music (BAM), Museum of Contemporary Art (Chicago), Park Avenue Armory (NYC), and the Huddersfield Contemporary Music Festival in England. His work in the LA Phil, and with ICE, has allowed him to work closely with the foremost composers of our time including John Adams, Louis Andriessen, Steve Reich, and George Lewis. As a concerto soloist, Brandon has made appearances with the Atlanta Symphony Orchestra under Robert Spano, Albany Symphony Orchestra, and the American Composers Orchestra, among others. His debut album featuring works by Kalevi Aho, J.S. Bach, Pierre Boulez, and Sergei Prokofiev, will be released by Haenssler Classics this spring.
Committed to mentoring the next generation of musicians, Brandon is a Resident Artist with Imani Winds at the Mannes School of Music at The New School in New York City, and is on the Summerfest faculty at the Curtis Institute of Music in Philadelphia. He has led masterclasses at countless conservatories and universities including Curtis, Oberlin, University of Michigan, University of Maryland, Lawrence University, Ohio State, Penn State, and the University of Wisconsin-Madison.
Brandon is a graduate of the Oberlin Conservatory of Music at Oberlin College. While at Oberlin, Brandon studied abroad in France at the Conservatoire de Paris. He received his Master of Music degree from the Manhattan School of Music, where he won the Concerto Competition, and subsequently appeared as soloist in C.P.E. Bach’s Flute Concerto in D Minor.
He lives in Brooklyn, New York, where he enjoys consuming copious amounts of specialty coffee, and exploring the city’s vibrant arts scene with his partner, Adam.