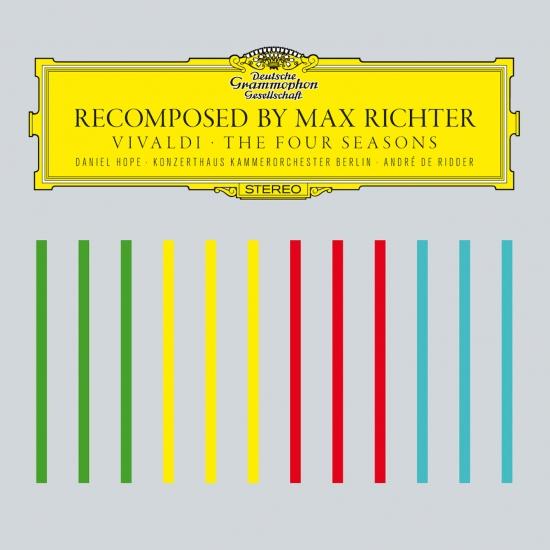 Following the success of Recomposed by Max Richter, DG will release a Version 2 of the album. The new edition will come with new artwork and booklet incl. brand new remixes, shadows and the film that was shot in Berlin in December, that some of you experienced on site.
The album features 5 new tracks, so called 'shadows which are electronic landscapes that were made for a live performance of the work with accompanying visual material made by the Danish game designers DarkMatters. He and Max developed these pieces to intercut with the written orchestral material, and to illuminate the abstract visual world of the images.
„Antonio Vivaldi's Le Quattro Stagioni is one of the most beloved works in Baroque music, and even the most casual listener can recognize certain passages of Spring or Winter from frequent use in television commercials and films. Yet if these concertos have grown a little too familiar to experienced classical fans, Max Richter has disassembled them and fashioned a new composition from the deconstructed pieces. Using post-minimalist procedures to extract fertile fragments and reshape the materials into new music, Richter has created an album that speaks to a generation familiar with remixes, sampling, and sound collages, though his method transcends the manipulation of prerecorded music.“
„Richter has actually rescored the Four Seasons and given the movements of Spring, Summer, Autumn, and Winter thorough makeovers that vary substantially from the originals. The new material is suggestive of a dream state, where drifting phrases and recombined textures blur into walls of sound, only to re-emerge with stark clarity and poignant immediacy. Violinist Daniel Hope is the brilliant soloist in these freshly elaborated pieces, and the Konzerthaus Kammerorchester Berlin is conducted with control and assurance by André de Ridder, so Richter's carefully calculated effects are handled with precision and subtlety. Deutsche Grammophon's stellar reproduction captures the music with great depth, breadth, and spaciousness, so everything Richter and de Ridder intended to be heard comes across.“ (Blair Sanderson)
Daniel Hope, Violine
Konzerthaus Kammerorchester Berlin
André de Ridder, Dirigent