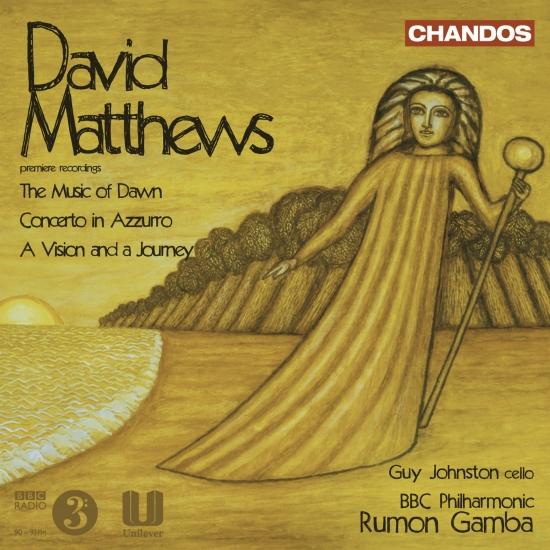 Matthews, D:
The Music of Dawn
Concerto in Azzurro
A Vision and a Journey

Guy Johnston (cello)
BBC Philharmonic, Rumon Gamba
The BBC Philharmonic and Rumon Gamba showcase three of his symphonic poems: The Music of Dawn, A Vision and a Journey, and the cello concerto, Concerto in Azzuro, performed by Musician of the Year award winner, Guy Johnston. All receive their premiere recording.
The Music of Dawn was inspired by the painting, of the same name, by British artist, Cecil Collins and used as the artwork this release. Matthews recalls, I regard him as one of the most important painters of the twentieth century. I was particularly struck by the painting called 'The Music of Dawn'. It immediately suggested music as, from its title it was obviously intended to do. Cecil Collins was the most musical of painters, and I hope that he would have liked the idea of his painting being evoked in the medium of orchestral sound.’ Richly scored for large orchestra the work is an evocation of the sun, beginning in the pale light of early dawn, and ending in the blaze of noon. The majority of the work was composed at Norman Del Mar’s house in Cornwall.
Both A Vision and a Journey and Concerto in Azzurro were commissioned by the BBC. The 'symphonic fantasia' A Vision and a Journey was first performed by the BBC Philharmonic in 1993. Concerto in Azzurro is composed as a single large-scale movement, lasting just under 25 minutes. It derives from the first movement of Bruckner’s Ninth Symphony and a holiday spent on the Island of Lundy, and a vision of blueness found there.
Peter Marchbank of the Guardian wrote recently of David Matthews, ‘The lyricism shines out and one is instantly aware that this is music by a composer who is very much a part of the great English tradition.’
“The music speaks so directly and involving that you're caught up in it from the start. …A Vision and a Journey lives up to its title impressively: taking Sibelius as an inspiration… was clearly no bad thing. Strong persuasive performances, especially from Guy Johnston in the Concerto, are caught in exemplary sound.” (BBC Music Magazine)
David Matthews: The Music of Dawn, Op. 50
Very calm and still -
A tempo - Presto -
Tempo I - Piu mosso - Misterioso -
Tempo I, very calm - Presto - Tempo I -
Allegro vivace -
Sempre molto energico - Piu mosso - Strepitoso - Subito piu sostenuto -
Meno mosso - Calmo e maestoso - Poco solenne
David Matthews: Concerto in Azzurro, Op. 87
Con moto appassionato - Lontano - L'istesso tempo, molto moderato - Tempo I -
Molto vivace e sbalzato - Meno mosso -
half note = 63 - Molto moderato e sostenuto - Poco piu mosso - Poco a poco incalzando - Esultante - Tempo I -
Poco lento, con calore - Molto sereno
David Matthews: A Vision and a Journey, Op. 60
Vivo - Broad, sustained - Poco piu mosso -
Ardente - Flowing - Poco piu mosso - A tempo -
Precipitoso - Andante moderato -
Allegro - Clear, luminous -
(Clear, luminous) - Sostenuto -
Molto tranquillo - Vivo - Allegro - A little broader