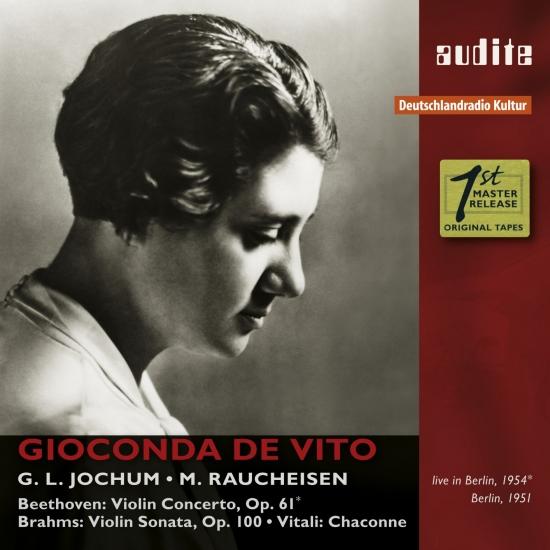 This live recording from 1954 of the Beethoven Violin Concerto with Gioconda de Vito and the RIAS Symphony Orchestra under Georg Ludwig Jochum is of particular documentary value as the Italian violinist made no studio recording of the work. Alongside music by Vitali and Brahms, her Beethoven interpretation comes to life thanks to her soulful, romantic tone.
Gioconda de Vito (1907-1994) was one of the few female violinists able to establish themselves as soloists on the concertplatform during the first half of the twentieth century. Born in the South Italian region of Puglia, the artist studied in Pesaro and Rome, accepting her first professorship at the tender age of seventeen. De Vito built an international career which took her as far afield as Argentina and Australia. In Germany she was especially highly regarded during the 1930s and 40s. Bach, Beethoven and Brahms represented the main pillars of her repertoire which, however, largely eschewed more modern music. De Vito cultivated a sumptuously romantic tone and never sought superficial violinistic brilliance. In 1961, aged only fifty-four, she retired from the concert stage. De Vito never recorded the Beethoven Violin Concerto in the studio: this sole live recording from 1954 with the RIAS Symphony Orchestra under the baton of Georg Ludwig Jochum presented here is therefore of particular documentary value.
„De Vito imbues every note in Beethoven's Violin Concerto with such heartfelt intensity that it's impossible not to be mesmerised by her hyper-Romantic…“ (BBC Music Magazine)
Gioconda De Vito, violin
Michael Raucheisen, piano
RIAS-Symphonie-Orchester
Georg Ludwig Jochum, conductor
Digitally remastered