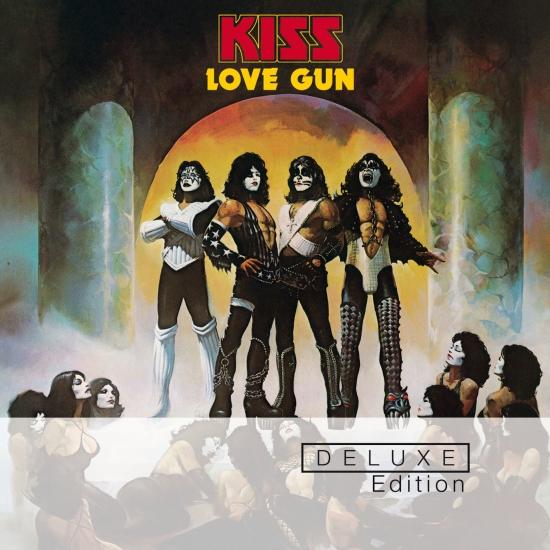 The band’s sixth studio recording, „Love Gun“ was the first album to feature lead vocal performances from all four original band members, and the last studio album with the original KISS line-up.
This double HighRes-edition includes the complete original album re-mastered and rare, previously unreleased Love Gun demos of “Plaster Caster”, “Then She Kissed Me”, “Tomorrow and Tonight” and “Much Too Soon”.
Kiss had exploded from cult attraction to worldwide phenomenon by the time of Love Gun's release. Coming off 1976's classic „Rock And Roll Over“ and „Love Gun“ proved to be the last Kiss album to include all four original band members (1979's „Dynasty“ and 1980's „Unmasked“ included a fill-in drummer for Peter Criss). The album is also considered to be Kiss' last classic '70s release.
Several tracks became signature favorites, such as the album-opening 'I Stole Your Love,' the explosive title track, and 'Shock Me' which is Ace Frehley's very first vocal appearance. As is the case with the other great Kiss albums of the era, LOVE GUN contains very little filler--'Christine Sixteen,' 'Almost Human,' and 'Plaster Caster' are all oft-overlooked highlights. An excellent effort produced by Eddie Kramer, Love Gun continued the trend of the band's albums going platinum upon release, Kiss concerts consistently selling out, and t-shirts of the unsightly grease-painted mugs of Ace, Gene, Paul, and Peter being worn by fans everywhere.
Ace Frehley, vocals, guitar
Paul Stanley, guitar
Gene Simmons, vocals, bass
Peter Criss, drums
Recorded at The Record Plant, New York, New York
Engineered by Corky Stasiak; Eddie Kramer
Produced by Eddie Kramer, Gene Simmons, Ace Frehley, Paul Stanley, Peter Criss
Digitally remastered