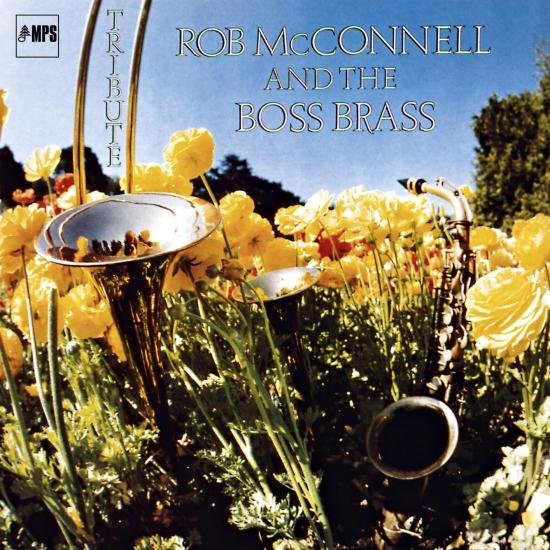 Award-winning Trombonist-arranger-composer Rob McConnell and his Boss Brass big band was a fixture on the Canadian jazz scene. The group was composed of Canada’s premiere jazz musicians, and many of their over two dozen albums have become collectors’ items for big band enthusiasts world-wide. Tribute was the second of three albums released by MPS. The album contains the compositions of six major musicians, all of whom “…were taken from us in the prime of their lives and careers” (McConnell). Alto sax great Cannonball Adderley’s Things Are Getting Better is a moderate-swinging gem that’s gotta make you feel good. Moe Koffman’s alto strolls out in front before taking a blistering double-time run. Lauded for his recordings on Impulse and Verve records as well as his arrangements for the likes of Bill Evans and Stan Getz, Gary McFarland stood as one of the most important arranger-composers of the 1960’s. His Blue Hodge slow-walks the blues over a richly-laid chordal carpet and sensitive tenor sax and piano solos. Trombone virtuoso Frank Rosolino’s Blue Daniel naturally features trombonists McConnell and Ian McDougall. Rosolino would have been pleased. Trumpeter Blue Mitchell was an integral part of one of jazz legend Horace Silver’s greatest groups. Mitchell transformed Silver’s contemplative Peace into the up-tempo trumpet romp Blue Silver. One of McConnell’s favorite compositions, Bill Evan’s ballad My Bells rings out with beautiful harmonies and a graceful piano solo. Dave Brubeck cohort Paul Desmond’s Wendy features luxurious harmonies and Jerry Toth’s sumptuous alto sax solo. A big band treat with insightful arrangements of compositions from six great jazzmen.
Digitally remastered 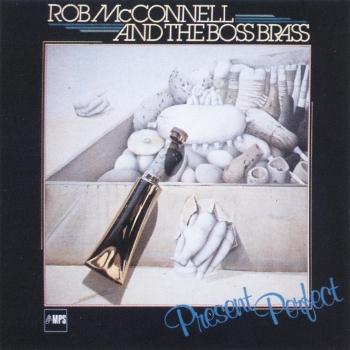 Rob McConnell
was born February 14, 1935 in London, Ontario, Canada, and died on May 1, 2010 in Toronto, Canada. The valve trombone master and brilliant arranger formed his beloved The Boss Brass big band in 1968. With a challenging repertoire of jazz compositions and arrangements by McConnell and other skilled band members, Rob McConnell and The Boss Brass would soon become the leading big band in Canada and ultimately, among the finest jazz bands in the world. Always a band of soloists and leaders in their own right, the Grammy Award-winning Boss Brass has comprised a ‘who’s who’ of jazz luminaries and recorded with an awe-inspiring list of artists including Mel Torme, Joe Williams, Singers Unlimited, and Oscar Peterson throughout its legendary lifespan.
McConnell grew up in Toronto, and made a brief foray into a financial career, working for a brokerage firm for three years, but soon resumed his musical calling, working first as a pianist before settling into playing valve trombone exclusively. It was when he went to Edmonton to play in a band led by saxophonist Don (D.T.) Thompson that McConnell’s music career really got started. In the pre-Brass years, Rob became one of the busiest studio musicians in Toronto, playing, arranging, and composing non-stop. In 1964, he joined fellow Canadian Maynard Ferguson’s New York band, returning to Toronto later that year, and the beginning of a four-year stint with the Phil Nimmons-led Nimmons ‘n’ Nine Plus Six.
McConnell has led a number of smaller ensembles during his career, always incorporating the talents of the most venerated musicians including Guido Basso, Rick Wilkins, Ian McDougall, and always, the great guitarist Ed Bickert. He did considerable solo work, too, appearing by invitation at important American festivals including the prestigious Concord (California) Jazz Festival in 1990. He formed his fiery The Rob McConnell Tentet in 1997, featuring a number of the charter members of The Boss Brass, but also showcasing the techniques of some of the best young players on the current jazz scene. But it was through his leadership of The Boss Brass that McConnell’s place as one of Canada’s most highly regarded musical artists was assured for all time. (Source: www.canadianjazzarchive.org)
Boss Brass
Toronto jazz orchestra (big band) led by Rob McConnell. It was formed in 1968 as a 16-piece band composed of the city's leading studio musicians to record arrangements of pop songs of the day for CTL. It took its name from its instrumentation at that time - trumpets, trombones, french horns, and a rhythm section. (Five saxophones were added in 1970, and a fifth trumpet in 1976.) The Boss Brass made its first public appearance in January 1969 at the Toronto nightclub the Savarin. Having built a challenging and largely original repertoire of jazz compositions and arrangements by McConnell and band members Ian McDougall and Rick Wilkins, by the mid-1970s the Boss Brass had become the leading big band in Canada, and one of the finest in the world.
Its itinerary of public performances nevertheless has been limited. It played occasional engagements during the 1970s and 1980s in Toronto clubs (eg, Colonial Tavern, Basin Street, El Mocambo, Bourbon Street, the BamBoo), at Ontario Place and, as part of the city's du Maurier jazz festivals, Roy Thomson Hall. In 1984 it appeared at Massey Hall with the Toronto Philharmonic Orchestra in a symphonic-jazz program of commissioned works by McConnell, McDougall, Wilkins, Louis Applebaum, Victor Davies, and Harry Freedman. The Boss Brass made its US debut in 1981 at the Monterey Jazz Festival in California and performed in Hackensack, NJ, with the singer Mel Tormé in 1983, on tour in California in 1984, at the Concord (Cal) and Mt Hood (Ore) jazz festivals in 1984, and at the Playboy Jazz Festival with Tormé in 1986. It also gave annual concerts 1983-8 at McComb College, Mount Clemens, Mich. After a hiatus 1988-90, the Boss Brass resumed its club and concert schedule as before. The orchestra's name has been carried much further afield on record. The Boss Brass won a (US) Grammy Award in 1984 for best jazz big band recording (All in Good Time) and had Grammy nominations in similar categories annually 1978-80 and again in 1982. It received Juno awards for best jazz album in 1978 (Big Band Jazz), 1981 (Present Perfect), and 1984 (All in Good Time).
In a review of the orchestra's performance with Tormé in Hackensack, NJ, Stephen Holden noted, McConnell's 'elaborately chromatic band charts feature richly harmonized brass choirs that break into occasional mild dissonance. Although this full orchestra style became the springboard for several superb soloists, the band's extraordinary ensemble sound outshone any individual voice... [it] performed with the focused intensity and tonal clarity of a great symphony orchestra (New York Times, 19 Jan 1983). McDougall, Wilkins, Eugene Amaro, Guido Basso, Ed Bickert, Jimmy Dale, Moe Koffman, John MacLeod, Sam Noto, Don Thompson, and Jerry Toth have been among the band's featured jazz soloists.