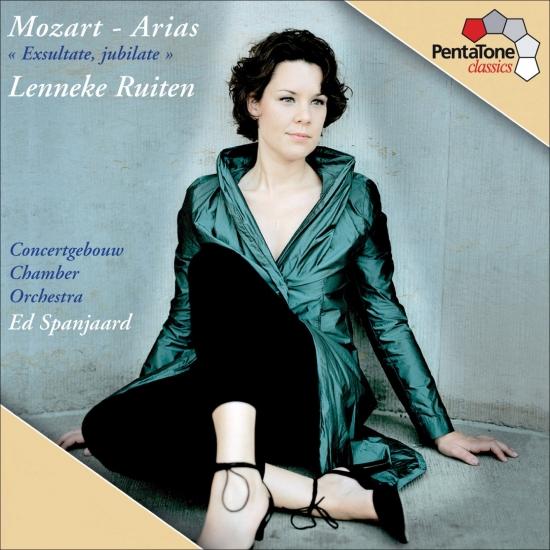 Award-winning Dutch soprano Lenneke Ruiten presents seven Mozart arias and Exsultate jubilate on this highly-regarded album, accompanied by Ed Spanjaard conducting the Concertgebouw Chamber Orchestra.
"Seven Mozart concert arias one after the other may not be ideal programming, but this gifted Dutch soprano, a natural Mozartian, makes such sweet sounds that you're happy to let her continue. Even when singing quietly, she's never frightened by the top notes, while her coloratura trills are clear as a bell. A soft acoustic disadvantages the Concertgebouw Chamber Orchestra, whose playing needs more definition, but under the fug the right spirit is there. After the arias comes Exsultate, Jubilate - jubilation indeed." (Geoff Brown, The Times)
"The Mozart aria recital is almost de rigueur for young singers, but Dutch soprano Lenneke Ruiten manages to produce one that's promising and distinctive here. Aside from the sacred aria Exsultate, jubilate, K. 165, none of the standard items are here. The contents otherwise aren't exactly rarities, but they're not heard every day and they're intelligent selections for Ruiten's drama-oriented voice. Her comments in the booklet call them concert arias, which isn't exactly correct; actually, most of them are what's known as insertion arias, written by Mozart for sopranos who wanted to turbocharge their parts in operas by other composers. The opening Vorrei spiegarvi, oh Dio, K. 418, for example, was written for addition to Pasquale Anfossi's Il curioso (1783). According to legend, soprano Josepha Dussek, the wife of composer Franz Xaver Dussek, contrived to have Mozart locked up until he wrote Bella mia fiamma, K. 528, as an insertion aria for her performance in an opera by Jommelli. Mozart did this kind of thing well, apparently having learned the art of writing flattering soprano fireworks while dating singer Aloysia Weber, the older sister of his eventual wife, Constanze, and it's no surprise he was in demand. Several of the arias take the singer into the third octave above middle C, and in general these are among Mozart's most vocally demanding works. Ruiten actually does better with these than with the ubiquitous Exsultate, jubilate, which is all brightness and brilliance. Her voice has a bit of grainy texture in its lower ranges, exploding very effectively into bright lights at the top, and her way with the emotional content of each aria makes one want to hear her in a full-scale operatic production. The audiophile PentaTone label, which has pursued the intriguing double track of reissuing classic recording with high audio quality and seeking to expose developing new artists, delivers sound from a church that seems to be oriented toward engineers; it's technically impressive in the shades of the orchestra it reveals, but its big, chilly feel is wrong for the music. Notes are in Dutch, German, French, and English, but the aria texts get only an English translation." (James Manheim, AMG)
Lenneke Ruiten, soprano
Concertgebouw Chamber Orchestra
Ed Spanjaard, conductor