Jammin' - Outside the Box David Garfield 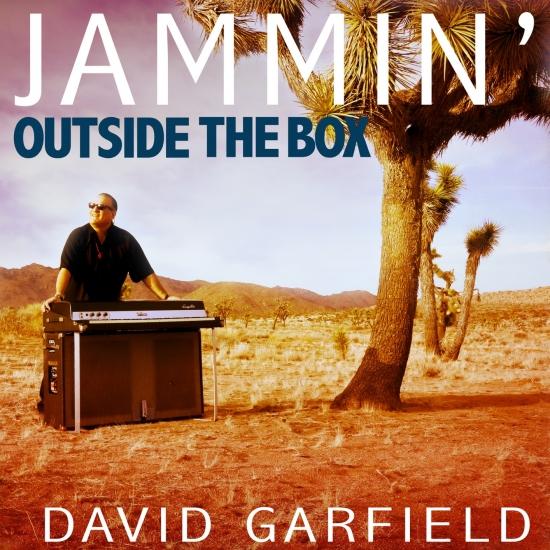 Info zu Jammin' - Outside the Box

Four decades into an accomplished career that has seen him record and tour with many of the brightest stars in the contemporary jazz, R&B and pop galaxies as well as front his own bands and solo albums, keyboardist-songwriter-producer-arranger David Garfield still feels like an outsider.
“All my life, I’m just trying to make music that I really believe in and can get really excited about. It’s never fit into one particular category thus, in many ways, I’ve spent my whole music career outside the box. It’s never been intentional and it’s not like I’m trying to be different just to be different. I’m just trying to be creative while striving for the highest level of musical and artistic integrity. In the long run, my career has taken place outside the box,” said Garfield, about “Outside the Box,” the extensive collection of recordings that he’s curating featuring a stellar cast of A-listers and premier session players that will be released on his Creatchy Records label.
The multi-part, genre-crossing project spanning various types of jazz, R&B, pop, country and rock will unfold in a series of record releases beginning with the March 23 release of “Jazz Outside the Box,” a straight-ahead jazz set with performances by Randy Brecker, Michael McDonald, The Doors’ drummer John Densmore, Tom Scott, Jason Scheff (Chicago), Will Lee, Eric Marienthal, Steve Ferrone, Vinnie Colaiuta, John Clayton, Michael Thompson, Brian Auger and Charlie Bisharat along with the accompaniment of full horn and string sections.
The second outing, “Jamming Outside the Box,” slated to drop this summer, has already spawned a Billboard No. 2 single with “Go Home,” showcasing a sizzling lineup on the Stevie Wonder original comprised of Grammy-winning saxophonist Kirk Whalum, guitar aces Paul Jackson Jr. and Tony Maiden (Rufus), bassist Freddie Washington, fellow keyboardist Greg Phillinganes, and horn players Marienthal and Stephen “Doc” Kupka (Tower of Power).
This album will be comprised of smooth/contemporary jazz cuts, including the second single presently climbing the charts, “Jamming,” a remake of the Bob Marley classic showcasing guitarist Mike Campbell (a member of Tom Petty’s Heartbreakers) and saxophonist Brandon Fields (The Rippingtons, Tower of Power). Icons David Sanborn and George Benson are among the luminous guests on the album, the latter for whom Garfield has served as music director since 1986. Other prominent players in the mix are Rick Braun, Nathan East, Marcus Miller, Ray Parker Jr. and Rickey Minor.
Presently rising up the Mediabase country charts is a preview of “Vox Outside the Box,” a set of vocal songs that will be the third release of the series. “I Lied” is one of two songs Garfield wrote for the project with legend Smokey Robinson and radio programmers have been swift to embrace the cinematically sweet ballad with adult contemporary crossover potential.
The fourth component will be “Stretchin’ Outside the Box,” which Garfield describes as “more adventurous with extended intros and special arrangements, a record perhaps geared towards musicians and music enthusiasts. It’ll have more fusion plus bonus tracks and alternate versions.” Garfield is also planning a seasonal selection entitled “Holidays Outside the Box.”
“Outside the Box” includes some of the final performances from the late guitarists Chuck Loeb and Larry Coryell. Their passings are part of what sparks Garfield’s inspiration for this enormous undertaking.
“The truth is we’re all getting older, and I wanted to gather all these great talents together while everyone is still alive, active and accessible,” said the St. Louis native and longtime Los Angeles resident. “I think that this will be the last time I’ll have the chance to do anything like this, especially of this scope and magnitude. The feeling I had throughout the project – from session to session, even as the personnel changed – was that we were collectively creating a powerful sense of community through the music.”
Despite all that he has done and achieved, including composing music for television, film, commercials and several international organizations, “Outside the Box” feels like it will be a career capper for Garfield, a crowning musical statement that he hopes will have a lasting impact. “I’m thinking about both the present and future, putting these tracks out in the world for consumption now, but in the hopes that after we’re gone, musicians who come up years from now will know what it was like to set up a Fender Rhodes and a drum set in the garage and play. Despite all the technology we have at our disposal, that’s where the raw energy begins. That energy is the core and driving force behind these songs, which to me truly represent not just the incredible musical legacy of Los Angeles, but various music communities from around the world.”
David Garfield, keyboards
Larry Klimas, saxophone
James Harrah, guitar
David Inamine, bass
John "JR" Robinson, drums
Richie "Gajate" Garcia, percussion
Jason Scheff, vocals 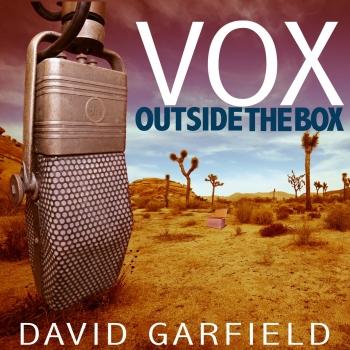 Vox Outside the Box 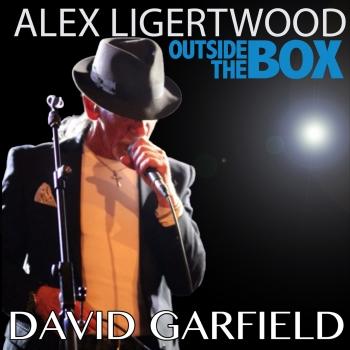 Alex Ligertwood Outside the Box 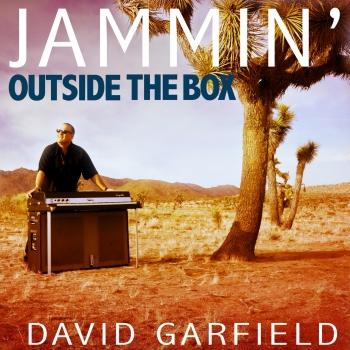 Jammin' - Outside the Box 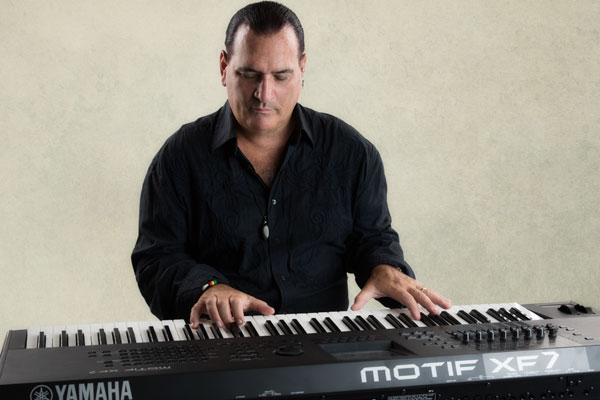 David Garfield
has had the same mission statement since moving from his hometown of St. Louis to Los Angeles as a teenager in the early 70s: “I make music.” Fully living up to this vision and in more expansive ways over the past few decades, the multi-talented keyboardist and musical Renaissance Man has established himself an eclectic force in popular music. At any given point during his career—and often at the same time—he has been a renowned songwriter, producer, bandleader (of Los Angeles based contemporary world jazz collective Karizma), arranger, recording artist, record label owner (Creatchy Records), session and touring musician, musical director and composer of various commissioned themes for global organizations.
The past few years have been particularly fruitful and creatively gratifying for Garfield. In addition to composing and performing music for Perfect Harmony, the latest ambitious 3-CD project for Karizma, he has written several songs with Motown legend Smokey Robinson, including “One Like You,” which George Benson recorded on his 2009 album Songs & Stories. Garfield, who has done numerous stints as Benson’s musical director since 1986 (including his current run which began in 2006), also arranged and produced and performed on Benson’s most recent release Guitar Man. Garfield recently produced “I Play The Piano,” a Blue Ray DVD of Terry Trotter playing solo piano for AIX Media.
Garfield has also been commissioned to write and produce theme songs and musical projects for several international organizations, including the composition and CD “Pool of Friendship” for the European Aquatics Federation LEN (League of European Nations); the American Society of Cinematographers (ASC); and “Deep Within Each Man” (co-written with Phil Perry) for the Shorinji Kempo World Karate Foundation.
As the owner of the independent label Creatchy Records, Garfield has produced numerous solo recordings and projects for many other artists. His first international release on Creatchy, 1997’s Tribute To Jeff, was dedicated to the late drummer Jeff Porcaro (a longtime friend) and featured contributions by superstars Don Henley, Eddie Van Halen, Michael McDonald, Richard Marx and many others. Garfield followed its Top Ten chart success with his subsequent releases I Am the Cat….Man, and Giving Back, the latter of which enjoyed regular airplay throughout the U.S., Europe, Japan and Australia. He also re-released on Creatchy several collections from earlier in his career, including L.A. Keyboard Project, Recollections and Seasons of Change.
Featuring many of Los Angeles’ top session and touring musicians, Karizma’s discography on Creatchy includes Dream Come True, Cuba, All The Way Live, Forever in the Arms of Love, Document and Lost and Found. The other projects he has helmed for Creatchy include albums by guitarists Michael Landau and Michael O’Neill, saxophonists Brandon Fields and Larry Klimas and, most recently, former Toto bassist Mike Porcaro. Another classic Creatchy release, Los Lobotomys, is a collaboration with prominent members of the pop band Toto, with whom Garfield has collaborated with many times throughout the years. Garfield also frequently does free-lance keyboard and production work for established and up and coming artists from across the U.S. and throughout the world, including Europe, Asia, and South America.
In addition to his multi-faceted work with George Benson, Garfield continues ongoing musical relationships with numerous musical legends, including Boz Scaggs and Natalie Cole. Over the years, he has recorded with Cher, Spinal Tap, The Rippingtons, Ratt, Larry Carlton, and Smokey Robinson; produced for Oleta Adams and Flora Purim; and has performed live with Michael Bolton, The Blue Brothers, Brenda Russell and Rick Braun, among others. Early in 2012, he was presented with the Hall of Fame Award from the Java Jazz Festival in Jakarta; Garfield has performed at the famed Indonesia event several times, most recently with saxophonist Gerald Albright and vocalist Alex Ligertwood. The same trio of musicians later performed at the Blue Note in Tokyo.
At the same time as he was performing his first gigs with Karizma in the mid- 70s, Garfield began working with jazz greats such as Willie Bobo, Freddie Hubbard and Tom Scott. After establishing himself on the L.A. jazz scene, the keyboardist became a key part of the city’s vast studio world during its heyday and earned a reputation for fine craftsmanship and versatility. These experiences ultimately led to composing opportunities for TV, film and commercials for such companies as NBC, Disney, Nippon Television and RTL Germany. During the 80’s, Garfield arranged and produced many top Japanese artists and went on to produce his own projects for release in Japan. For the past 20 plus years, he has enjoyed ongoing popularity and success in that part of the world.
Reflecting on his extraordinary, diverse career, the Los Angeles based Garfield says, “It’s creatively invigorating to have the opportunity to do so many interesting musical projects, to see so many amazing places throughout the world, and to work with some of the greatest musicians both in L.A. and overseas. I feel as though I am always learning from the artists and musicians I work with, not simply on a musical level, but also benefiting from their wealth of stories and life and career experiences. There are always unexpected thrills along the way, from opening with his band for Sergio Mendez or Jason Mraz to recording in a studio next to Paul McCartney or Alice in Chains and having the opportunity to meet and get to know them. I love being involved in so many different aspects of music and the feeling that I truly never know what’s coming up next.”