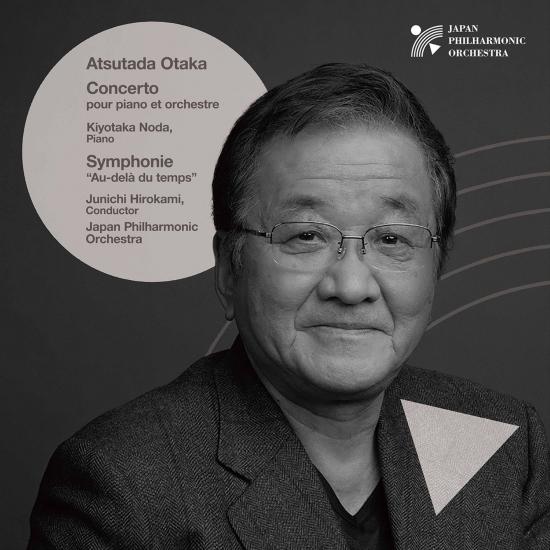 This album contains the orchestral works of Atsutada Otaka, a well-known Japanese composer. Symphonie "Au-dela du temps" was commissioned by the Sendai Philharmonic Orchestra, and premiered in September 2011, the year of Great East Japan Earthquake.
Otaka talks about this work as follows: "I had already completed the draft of it in February and on that day in March, I was working on the orchestration, so the work could not have been influenced by the Great Earthquake in March. However, I think we all share the hope that the beautiful nature and peace on our earth will continue forever. The eight bell-like strokes in the coda of the final movement is intended as a symbol of our hope and prayers for the future."
Kiyotaka Noda, piano
Japan Philharmonic Orchestra 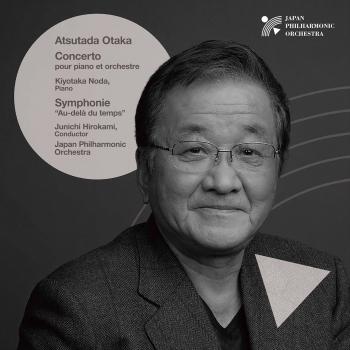 Kiyotaka Noda
is a Japanese pianist. After completing the doctoral course at Tokyo National University of Fine Arts and Music, Master's course in the same graduate school, he won the 1st place of the 64th Japan Music Competition and the Iguchi Prize, Kawai Prize, Nomura Prize. He also won the Kreutzer Prize, NTT Docomo Award. In addition to performing with the Tokyo Symphony Orchestra and Kanagawa Philharmonic Orchestra, he has worked in recital, chamber music and studied piano with Hamaguchi Nana, K. Shilde, Katsumi Ueda, Chamber Music with Shoka, Matsubara Katsuya.
Atsutada Otaka
Born in Tokyo in 1944. He graduated from the Tokyo National University of Fine Arts and Music [now Tokyo University of the Arts] in 1966, where he studied composition with Tomojiro IKENOUCHI, Akio YASHIRO, Akira MIYOSHI, and piano with Kazuko YASUKAWA. He furthered his studies at the Conservatoire National Superieur de Musique in Paris on a French Government scholarship, graduating in 1970. His teachers included Maurice DURUFLe, Marcel BITSCH, Jean-Claude HENRY, and Henri DUTILLEUX. He received Premier Prix in the classes of advanced harmony, counterpoint, and fugue.
After his return to Japan in 1970, OTAKA continued to compose, while also performing as a pianist in chamber music and song recitals. He also taught at his alma mater and Toho Gakuen College of Music. Awards include the 30th Otaka Prize [an award in name of his father who was an eminent composer] for “Image” for Orchestra in 1982, Bekku Prize for his “Fantasy” for Organ and Orchestra in 2001, and 60th Otaka Prize for Symphonie ~Au-dela du Temps ~ in 2012. He is Professor Emeritus at the Tokyo University of the Arts.