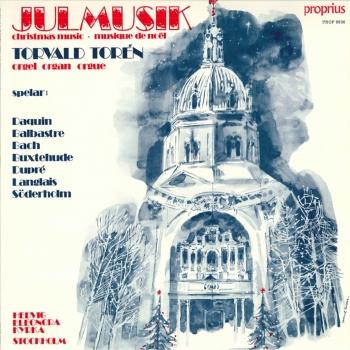 Torvald Torén (1945-2001)
was one of the most notable Swedish organists of his time. He performed a vast amount organ repertoire, and was considered as one of the foremost interpreters of French romantic-symphonic organ music. Torén studied at the Royal College of Music in Stockholm; piano with Stina Sundell, and organ with Gotthard Arnér. Torén received a Soloist Post-Graduate Degree in both instruments. He continued his organ studies with Maurice Duruflé, Jean Langlais and Flor Peeters. Torvald Torén was the organist of Hedvig Eleonora Church in Stockholm from 1966 until his death in 2001. Additionally he served as a professor in organ at the Royal College of Music from 1983 to 2001. Torvald Torén gave recitals internationally at the most prestigious venues. He was also a sought-after lecturer and a member of several international organ competitions. Torvald Torén made numerous radio broadcasting recordings and some twenty records, for exemple the Trio Sonatas of Bach, the complete organ works of Franck and Duruflé, and the six symphonies of Vierne. He received the Swedish gramophone prize in 1982 and 1984. Torén was elected as a member of the Swedish Royal Academy of Music in 1993. The legendary film director Ingmar Bergman was a long-time admirer of the art of Torvald Torén. A Bach recording with Torvald Torén from Leufsta bruk is featured in the last Bergman movie, Saraband. In John Irving's novel Until I find you Torén is one mentioned as a character.