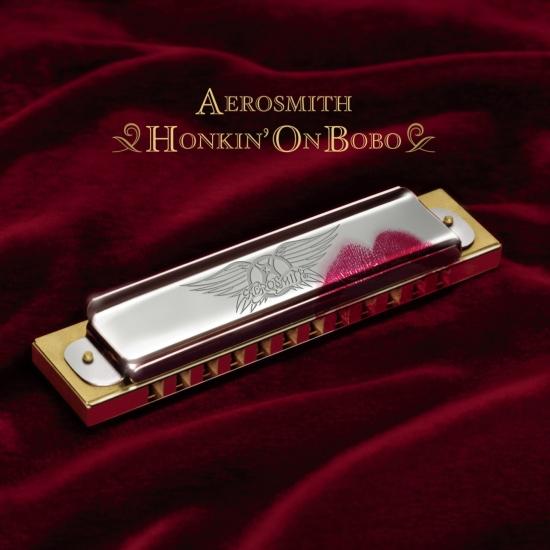 Info for Honkin' On Bobo (Remastered)

With „Honkin' On Bobo“, Aerosmith takes a break from radio-ready fare to record an album that pays tribute to the blues influences that have always been close at hand for the group. Further enhancing the sound of this project is the presence of storied pianist Johnnie Johnson (on two tracks) and Jack Douglas, the producer for many of Aerosmith's classic 1970s albums.
The result is the typical 'Smith sass and shimmy, with a contemporary sensibility applied to nuggets plucked from the songbooks of Willie Dixon (the sleazy strut "I'm Ready"), Sonny Boy Williamson (a rollicking "Eyesight to the Blind"), and Little Walter (the Howlin' Wolf-flavored "Temperature"). Throughout the record, Joe Perry and fellow fret-bender Brad Whitford play with a dirty, fuzz-guitar tone, perfectly complemented by Steven Tyler's equally rough-and-rowdy forays on the harmonica. As a result, these Boston natives do a stellar job with fiery renditions of Big Joe Williams's "Baby, Please Don't Go" and Mississippi Fred McDowell's "You Gotta Move," proving that they can still rock hard while playing the blues.
Steven Tyler, lead vocals, harmonica
Joe Perry, guitar, backing vocals, lead vocals on "Back Back Train" and "Stop Messin' Around"
Brad Whitford, guitar
Tom Hamilton, bass
Joey Kramer, drums
Additional musicians:
Tracy Bonham, vocals on "Back Back Train" and "Jesus Is on the Main Line"
Johnnie Johnson, piano on "Shame, Shame, Shame" and "Temperature"
The Memphis Horns, brass on "Never Loved a Girl"
Paul Santo, piano, electric piano, organ, engineering
Recorded in 2003 at the Boneyard, the Bryer Patch, Pandora's Box
Engineered by Paul Caruso, Jay Messina
Mixed, engineered, production by Marti Frederiksen
Mastering by Bob Ludwig
Produced by Steven Tyler, Joe Perry, Jack Douglas, Marti Frederiksen
Digitally remastered