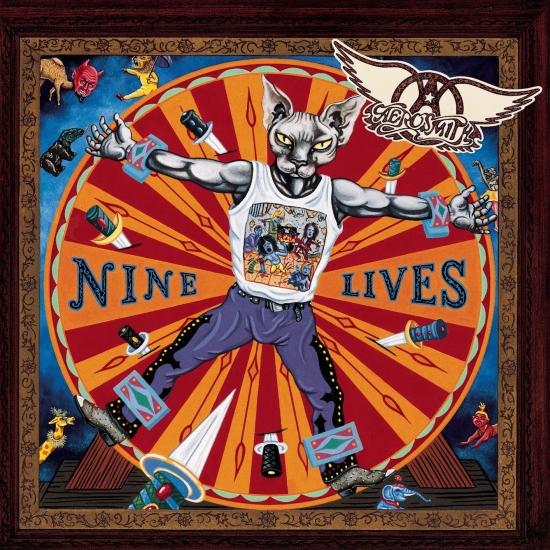 „Nine Lives“ marks Aerosmith's return to Columbia Records, the label for which it had its first round of stardom in the 1970s, and the label with which the band nearly slid off the rock and roll map altogether in the 1980s. Columbia shelled out a lot of money to woo back the now-bigger-than-ever band, and ends up getting exactly the kind of over-the-top pop-rock it was paying for. Working with producer Kevin Shirley (Silverchair, Journey), the seemingly ageless combo from Boston has made another record overflowing with sexual innuendo ("Pink", "Falling In Love [Is Hard On The Knees]"), power ballads ("Fallen Angels," "Hole In My Soul") and hard-hitting riffs ("Nine Lives," "Crash").
Continuing its recent fascination with sounds alien to hard rock (didja notice the Polynesian log drums on 1993's GET A GRIP?), Aerosmith dabbles with Indian culture on „Nine Lives“. You can see it in the colorful packaging of the album, and hear it on "Taste Of India," which picks up where Led Zeppelin's classic "Kashmir" left off. The culturally confused epic features qawwali-esque vocalizing (a la Nusrat Fateh Ali Khan), a sarangi (an Indian fiddle) and, of course, some old-fashioned rock and roll.
Steven Tyler, lead vocals, harmonica
Joe Perry, guitar, backing vocals
Brad Whitford, guitar
Tom Hamilton, bass
Joey Kramer, drums
Additional musicians:
David Campbell, arranger, conductor
Ramesh Misra, sarangi
John Webster, keyboards, backing vocals
Recorded from September–November 1996 at Avatar Studios and The Boneyard
Engineered by Mark Hudson, Joe Perry, Rory Romano, Elliot Scheiner, Kevin Shirley, Steven Tyler
Produced by Kevin Shirley and Aerosmith
Digitally remastered