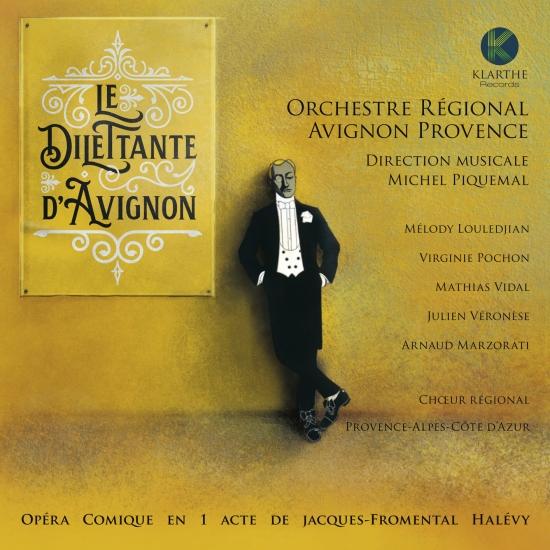 A little gem of fun! In Avignon, the theater director Casanova or rather ... Maisonneuve is stubborn to mount an Italian opera which he is in love until ridiculous. This tasty opera-comic composed in 1829 amuses itself to pique the elite of the time who swears by Rossini. The Avignon-Provence Regional Orchestra with the help of the Palazzetto Bru Zane brings back this score from Fromental Halévy, forgotten in the 19th century!
Le dilettante d'Avignon (English: The Dilettante of Avignon) is an 1829 opéra comique in one act by Fromental Halévy, to a libretto by his brother Léon Halévy, based on an uncompleted work by François-Benoit Hoffmann. It was the composer's first popular success, since it was his first venture into opera after the relative failure in the previous year of Clari.
Léon Halévy was offered the uncompleted libretto of Le dilettante by Hoffmann's son.[1] He developed it into a witty satire on Italian music, and the work was premiered at the Opéra-Comique on 7 November 1829. The libretto contains some sly fun about the composer; like the imposter 'Imbroglio', Fromental Halévy himself was a graduate of the Prix de Rome, and was at the time of the premiere a 'chef du chant' (singing director), in this case at the Paris Opéra.
Melody Louledjian, soprano (Élise)
Virginie Pochon, soprano (Marinette)
Julien Véronèse, baritone (Valentin)
Arnaud Marzorati, Casanova / Maisonneuve
Mathias Vidal, Tenor (Dubreuil)
Chœur régional Provence-Alpes-Côte d'Azur
Orchestre Régional Avignon Provence
Michel Piquemal, direction 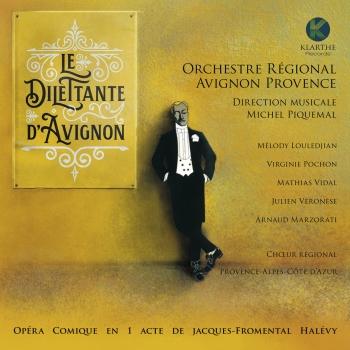 Melody Louledjian
just sang for the first time the role of Violetta/Traviata at the Opera of Tenerife. ​
She is part since 2017 of the Soloist Ensemble of the Grand Théâtre of Geneva. In 2018/19, she will sing in Geneva the roles of Frasquita/Carmen, Xenia/Boris Godounov and Luigia/Le convenienze e Inconvenienze Teatrali. She will also sing the main soprano role in Three Tales, a new opera of Gerard Pesson in the Opera of Lille, and sing with the Ensemble Intercontemporain the Quatre Chants of Grisey at the Paris Philharmonie and with the Camerata of Lausanne, Illuminations of Britten. ​
In 2017/18 she sang there the roles of Barbarina/Le Nozze di Figaro, Princesse Elsbeth/Fantasio, Arsena/Le Baron Tsigane and Lola/Cavaliera Rusticana. She also appeared in several concerts with La Damoiselle Elue of Debussy with the Orchestra of Ile de France in January at the Philharmonie of Paris, and gave a recital in Aix-en-Provence in June with the pianist Antoine Palloc. ​
Her future plans include also the role of Leila/Pecheurs de Perles in the Grand Theater of Avignon, Oenone/Phèdre at the Budapest Festival with recording, Laurette/Richard Coeur de Lion at the Royal Opera of Versailles, La Dottoressa/Il viaggio della Speranza at the Grand Theater of Geneva, Violetta/Traviata, Charlotte/Der Diktator and Bubikopf/Der Kaiser von Atlantis at the Opera of Tenerife… ​
“Melody Louledjian has so much scenic presence as musical refinement” Le Figaro. ​
The French of Armenian origin Melody Louledjian began music at a very young age. After a First Prize in Piano and a Voice Masters citation in Lyon and Wien, she began her career at the Grand Theater of Bordeaux in 2009 in Le Balcon of Peter Eotvos, where she sang the role of Carmen, a young prostitute. Acclaimed by the critics, she was to be, from then on, a regular guest of the Grand Theater of Bordeaux. ​
Thanks to her solid musical training, a perfect pitch and an excellent sight reading, she is particularly at ease with the contemporary repertory. She has appeared in several internationals festivals (Alte Oper-Musikfest in Frankfurt, Acht Brücken Festival in Musikverein of Köln and Düsseldorf, Musica in Strasbourg, IRCAM in Paris, März Festival in the Berlin’s Konzerthaus, Alger Festival, Automn’s Festval in Paris, Archipel’s Festival in Genève, Royaumont in Paris…) and she is regulary invited by ensembles such as l'Intercontemporain (Paris), Ensemble Modern (Frankfurt), Contrechamps (Genève), l’Instant Donné (Paris), Klangforum (Wien), Tippet (Dublin).
She has worked with composers such as G.Pesson, S. Gervasoni, Y.Prin, B.Fürrer, and P.Fénelon, in particular, on several original productions. She has performed stage works of Reimann, Cage, Kurtag, Feldmann, Schöllorn, Aperghis, Stockhausen, Say, Mundry, Carter... ​
She played successively the roles of Musetta/La Bohème at the Grand Theater of Bordeaux, Le Feu/le Rossignol/L'Enfant et les Sortilèges and the Erste Zofe/Der Zwerg at the Opéra of Paris and the Bayerische Staatsoper München, Elvira/L’Italiana in Algeri at the Grand Theater of Bordeaux and the Opera of Vichy, Adele/Die Fledermaus at the Opera of Nice, Carmen/Le Balcon, Naïade/Ariadne auf Naxos, Gabrielle/La Vie Parisienne at the Opera of Lausanne, Oberto/Alcina, Eurydice/Orphée aux Enfers, Woglinde/Rheingold, Waldvogel/Siegfried at the Teatro di Reggio Emilia, la Casa da Musica a Porto, Theater of Luxembourg, Cité de la Musique in Paris, Theater of Reims, Theater of Luxembourg, Die Fünfte Mägd./Elektra at the Opera of Nice , Girandole/La Cour du Roi Pétaud at the Theaters of Athénée and Reims, La Bergère/La Pastorale at the Theater of the Chatelet, Elise/Le Dilettante at the Opera of Avignon, Die Fraulein/Die Gespenstersonate at the Radio Suisse Romande, Ciboulette/Ciboulette at the Opera Comique. ​
She equally enjoys the concert repertory and has performed recitals and concerts with orchestra in the Opera Comique, Antic Theater of Orange, Alte Oper Frankfurt, Gstaad New Year Music Festival, Opera de Nancy (Glück’s arias), at the Grand Theater of Bordeaux (recitals and IXth of Beethoven, at the Opera of Saint-Etienne (Carmina Burana), at the Opera of Nice (Gala), Auditorium of Lyon (recital), Estivales of Labeaume (Bacchianas of Villa Lobos), and recitals abroad: Queen Elisabeth Chapelle in Brussels, Franco-Japonais’s Institut of Kyoto, Estivales of Court in Swissland. ​
Melody Louledjian regulary gives Master Classes in the High School of Music of Geneva at the Conservatory of Toulon, on contemporary music, free improvisation, vocal technic and career development. She is teacher at the European Opera Academy. ​
Melody Louledjian speaks French, Italian, Spanish, English and German.