Live at the Half Note February 23, 1963 (Remastered) John Coltrane Quartett 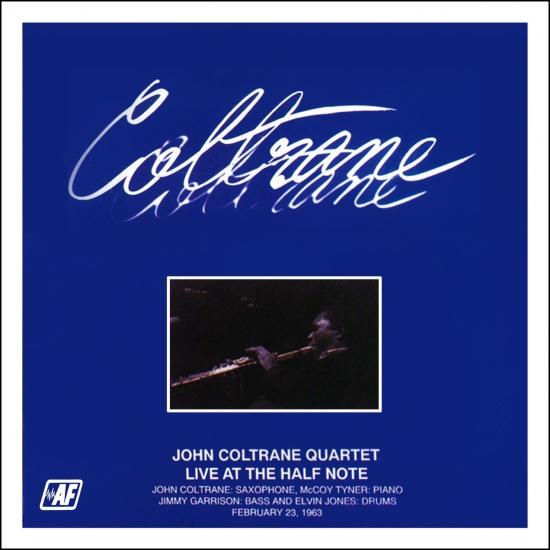 John Coltrane's "Live At The Half Note" on the Laserlight label is an excellent look at what is arguably jazz's greatest quartet - the "Classic Quartet" of Trane, McCoy Tyner, Jimmy Garrison and Elvin Jones - in an intimate club setting. It is during performances like these, where Coltrane had the ability to stretch out and play at length, improvising and creating on the spur of the moment, that he further developed his signature, searching style. According to the liner notes, these four tunes - "I Want To Talk About You," "Brazilia," "Song Of Praise" and "One Up, One Down" - were recorded in 1963 at the Half Note. However, someone is lying! The reason I say this is I also have a live Coltrane album called "Live At Birdland And The Half Note," and three of these exact same recordings are featured on that disc (only "Brazilia" is not). This album on the Cool & Blue label credits "I Want To Talk About You" and "One Up, One Down" as being from a 2/23/63 date at Birdland, not the Half Note, while "Song Of Praise" was documented at the Half Note, but from 5/7/65, and not 1963 as the Laserlight disc claims. I tend to believe the information on the Cool & Blue disc is correct, not only because the liner notes are more detailed, but because "Song Of Praise" and "Brazilia" are better quality recordings, and clearly not from the same date as "I Want To Talk About You" and "One Up, One Down." Potential historical inaccuracies aside, the Laserlight disc will be a welcome addition to any Coltrane collection. The sound is excellent and the performances are first rate.
"I Want to Talk About You" and "One Up, One Down" actually originated from Birdland on Feb. 23, 1963 and, although the other six performances are from Half Note, they date from March 19 ("Impressions" and "Chim Chim Cheree"), April 12 ("Untitled Original") and May 7 ("Brazilia," "Song of Praise" and "My Favorite Things") of 1965. Coltrane is in particularly fiery form on the later tracks and with four of the eight selections being over 19 minutes long, there is plenty of room for him to stretch out. It's recommended despite the erratic packaging but sure to be hard-to-find." (Scott Yanow, AMG)
John Coltrane, tenor saxophone, soprano saxophone
McCoy Tyner, piano
Jimmy Garrison, double bass
Elvin Jones, drums
Recorded live at the Half Note, New York, NY, March 26
Produced by Ravi Coltrane
Digitally remastered