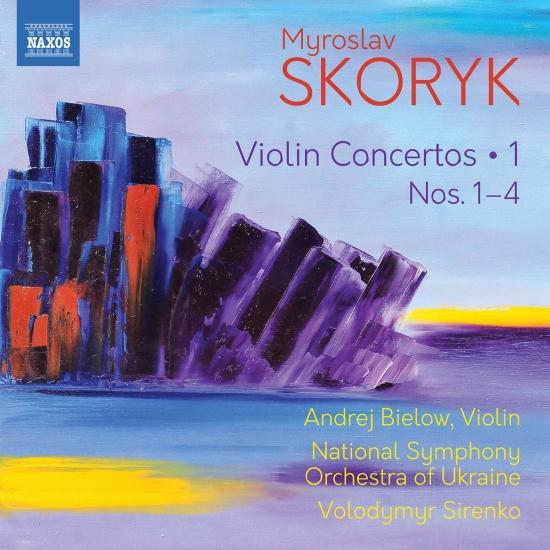 Myroslav Skoryk, a postgraduate student of Dmitry Kabalevsky, is one of Ukraine’s leading composers and teachers. His works range from opera and ballet, a symphonic transcription of Paganini’s 24 Caprices, and his cycle of nine Violin Concertos written over a 45-year span. They draw on elements of Carpathian folklore and are saturated in expressive dialogues, lyricism and elegy while also exuding powerful intensity. Skoryk’s sensual writing is frequently contrasted with syncopated motifs, cadenzas, fugal episodes and march rhythms. This is the first of two volumes.
Andrej Bielow, violin
National Symphony Orchestra of Ukraine
Volodymyr Sirenko, conductor 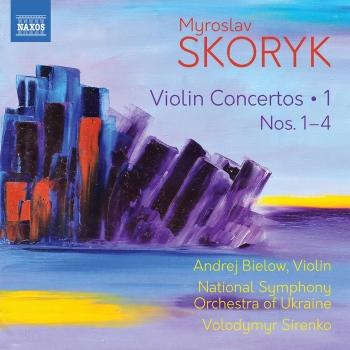 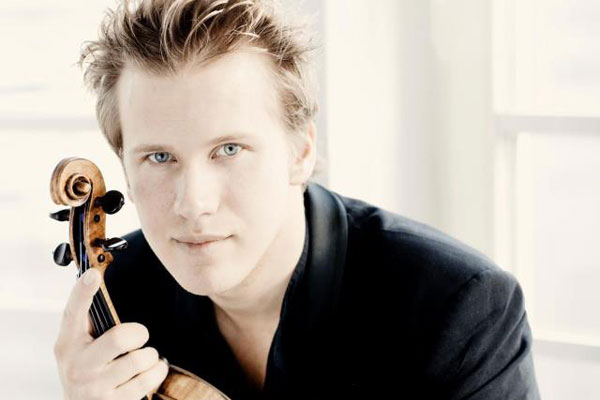 Andrej Bielow
As a soloist he collaborated with such renowned orchestras as the New Japan Philharmonic, Orchestra National de Radio France, NDR Radiophilharmonie, Sinfonieorchester des Bayerischen Rundfunks, Amadeus Chamber Orchestra, Kiev Philharmonic and Münchner Kammerorchester under the baton of established conductors such as Kurt Masur, Yan Pascal Tortelier, Gianandrea Noseda, Miguel Gomez-Martinez, Christian Arming, Agnieszka Duzcmal, Junichi Hirokami und Christoph Poppen, Enrique Mazzola to name a few of them.
His repertoire includes over 30 concertos and all the major sonatas. He has recently performed the Shostakovich no. 1 in Lindau with SWD Philharmonie Konstanz and the Tschaikowsky at the Ryedale Festival with the orchestra of Opera North under Martin Andre. He gave his first successful London recital at Wigmore Hall in 2009 and performed Malcolm Arnold´s concerto for two violins at Cadogan Hall in October 2012.
He received his first violin lessons at the age of five and in 1993 attended the special music boarding school in Kiev. Having recognized his talent, Prof. Michael Kusnetsov took the eleven-year-old boy into his family and guided his further musical education. Already at an early age, Andrej started to perform at carefully selected concerts in Europe and USA.
At the age of 15, Andrej settled in Germany to study with Prof. Krzysztof Wegrzyn at the University of Music and Drama in Hannover. Further study followed with Gerard Poulet in Paris, Herman Krebbers, Ida Haendel, Ana Chumachenko and more recently Alfred Brendel.
Andrej Bielow won several major prizes at international competitions such as the Long-Thibaut Paris, ARD Munich, Hanover (Joachim), Citta di Brescia and others. Due to his extraordinary talent and musical qualities he was awarded various scholarships from the cultural institutions such as the Ukrainian Culture Foundation, Gundlach Foundation, Deutsche Stiftung Musikleben and Förderpreis of the Lower Saxony.
Andrej Bielow has devoted much of his career to chamber music, of which he is a passionate advocate. He has appeared at the following Festvals: Schleswig-Holstein, Klavierfestival Ruhr, Rheingau, Kuhmo, Young Euro Classic Berlin, Schubertiade Schwarzenberg, Ryedale, Macau and many others.
At the Kronberg Academy he performed with Gidon Kremer, Juri Bashmet and the Beaux Arts Trio. In 2011 he joined Kit Armstrong and Adrian Brendel to form a piano trio. Future projects include a complete cycle of Beethoven and Mozart violin sonatas with Kit Armstrong. He joined the Szymanowski Quartett as leader from 2005 until 2014. More recently he has recorded with the distinguished English pianist Christopher Glynn, with whom a new CD of sonatas written during the first World War will soon be released.
Since 2014 Andrej joined the violin faculty at the University of Arts in Graz and regularly gives masterclasses in Europe, Asia and USA. In 2005, together with jazz-guitarist Johan Weiss, he founded the „MBF“ Foundation (Musik braucht Freunde) which has provided financial support for over 130 needy students at the University of Music and Drama, Hanover. Since 2013, Andrej Bielow has become a regular visiting teacher delivering classes at the Royal Academy of Music in London'.
Andrej plays the violin "ex Flesch", built in 1745 by Lorenzo Guadagnini.