Spirits Dancing In The Flesh Santana 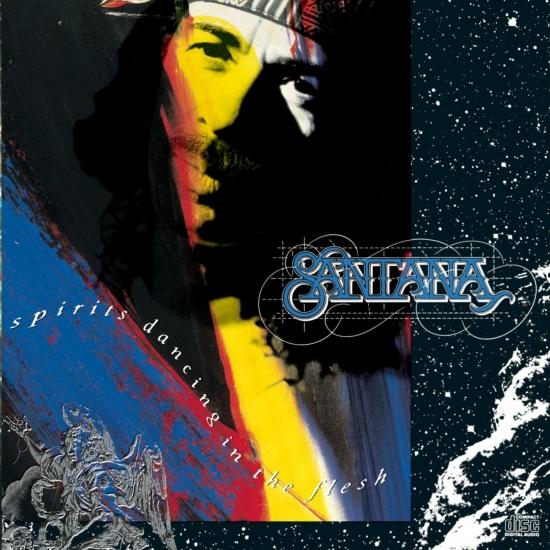 „Following a 20th anniversary reunion tour in 1989 to promote Viva Santana!, Carlos Santana reorganized the band as a sextet and recorded Spirits Dancing in the Flesh, Santana's 15th and final studio album for Columbia Records. It was an unusually eclectic collection, featuring songs by Curtis Mayfield ("Gypsy Woman"), the Isley Brothers ("Who's That Lady"), and Babatunde Olatunji ("Jin-Go-Lo-Ba"). For all those influences, it was more of a straightforward, guitar-heavy rock album than usual. Coming more than three years after Santana's last new album, Freedom, it sold to the band's core audience only, reaching number 85.“ (William Ruhlmann, AMG)
„An unlikely yin and yang have possessed Carlos Santana throughout his career: Mystic and materialist, the guitarist has vacillated between playing to the heavens and playing to the gallery. Though rarely willing to craft something devoid of artistic qualities, Santana is also mindful of being a pop star. Reconciling these two facets of his personality has been the task of his career, and one is never quite sure whether the next Santana album will be by an idealist or an idol. Happily, both incarnations show up on Spirits Dancing in the Flesh, and they play remarkably well together.
Like Amigos, the 1976 album that marked the end of the overtly religious phase of Santana's music and helped him regain his commercial following, Spirits Dancing in the Flesh plays on familiar themes and musical phrases. Since he had a major hit with "Black Magic Woman/Gypsy Queen," what better way to capitalize on that currency than to cover Curtis Mayfield's "Gypsy Woman"? Instrumental self-references also abound, including a reworking of African percussionist Olatunji's "Jin-Go-Lo-Ba," which appeared on the first Santana album as "Jingo," and a new track, "It's a Jungle Out There," which quotes the introduction from the group's own 1970 composition "Jungle Strut."
If short on originality, the album is still ambitious. After opening with a gospel-inflected invocation featuring singer Tramaine Hawkins, Spirits moves on to include two duets featuring Santana vocalist Alex Ligertwood and soul singer Bobby Womack; an instrumental with saxophonist Wayne Shorter; two covers ("Gypsy Woman" and the Isley Brothers' "Who's That Lady") produced by Starship's hack hitmaker Peter Wolf; and a Vernon Reid-produced medley matching a Santana original with John Coltrane's "Peace on Earth" and Jimi Hendrix's "Third Stone From the Sun." The band is solid, with keyboardist Chester Thompson offering Santana a steady base from which to solo. Drummer Walfredo Reyes and three different bassists hold the all-important rhythmic bottom together, while conga legend Armando Peraza still provides the band's inspiration.
It's hardly a surprise that a brief uplifting message from Carlos Santana accompanies Spirits Dancing in the Flesh. What is unusual is the message's placement: just below the note dedicating the album to junior-welterweight boxing champion Julio Cesar Chavez. Now that, like the album itself, is yin and yang at its finest.“ (Fred Goodman, Rolling Stone)
Carlos Santana, guitar, vocals, percussion
Chester Thompson, keyboards, horns, Hammond B3, vocals
Armando Peraza, bongos, congas, percussion
Walfredo Reyes, drums, timbales, percussion
Alex Ligertwood, vocals, guitar
Benny Rietveld, bass
Guest musicians:
Francisco Aguabella, congas
Kevin Dorsey, background vocals
Jim Gilstrap, background vocals
Tramaine Hawkins, lead vocals
Rashan Hylton, background vocals
Phillip Ingram, background vocals
Alphonso Johnson, bass
Keith Jones, bass
Stephen King, vocals
Hugh "Sweetfoot" Maynard, background vocals
Vernon Reid, guitar
Raul Rekow, congas, vocals
Paolo Rustichelli, keyboards, acoustic piano
Wayne Shorter, soprano sax, tenor sax
Orestes Vilató, timbales, vocals
Oren Waters, background vocals
Bobby Womack, lead vocals
Additional musicians:
Devon Bernardoni, keyboards
Charisse Dancy, choir
Sandra Hunter, choir
Marjo Keller, choir
Lynice Pinkard, choir
Lovetta Brown, choir
De Anna Brown, choir
Kevin Swan Butler, choir
Darryl Williams, choir
Edwin M. Harper, Jr., choir director
Engineered and mixed by Devon Bernardoni, Paul Ericksen, Arne Frager
Produced by Carlos Santana, Vernon Reid, Chester Thompson, Jim Gaines
Digitally remastered