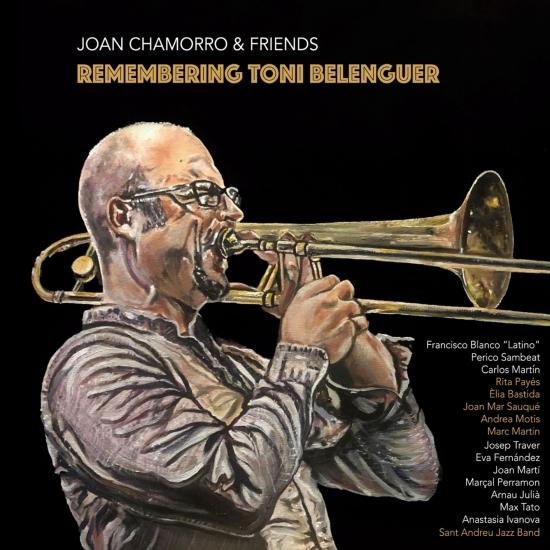 There are people who have a light of their own, who give off a special energy. People that each time you meet them, even after a long time, always invade you with a special feeling of joy.
People with whom the embrace is absolutely sincere. You know you can trust them. That they exude love. That their music reflects exactly what they are, how they breathe, how they feel, how they think. Toni Belenguer was one of those people, difficult to find and that, once you meet them, you want them to be close to you, because they are loved, because they bring positive energy, with their genius and their existential doubts, but above all for their generosity and love.
I met Toni Belenguer around 2005, when we started playing together in groups with double bass player David Mengual and drummer David Xirgu. We played a tribute to Gerry Mulligan. We played some gigs at the Jamboree and other venues. I remember that playing with Toni was a constant source of inspiration, both melodically and rhythmically. He never ceased to surprise you with his phrasing, with his ideas of overwhelming coherence. In 2008 I recorded an album called “Baritone Rhapsody”, where he played practically all the songs. That was my first recording with Toni.
After that came other collaborations, both in my personal projects and those related to the Sant Andreu Jazz Band.
He participated in the JAZZINGS (that's how the SAJB CDs are called) 5 (2014), 6 vol2 (2015), 7 (2016) and 8 vol2 (2017).
He also participated in other CDs of the collection "Joan Chamorro presenta": Rita Payés (2014), Marc Martín (2015), Joan Mar Sauqué (2016), Èlia Bastida (2017), Joan Codina (2017) and also in the album "Joan Chamorro Nonet & More Play Alfons Carrascosa's Arrangements"(2017).
When in 2020 I received the sad news that Toni had left us, I thought of paying him a tribute, dedicating a concert to him in the framework of the Jazz Festival that I direct: the Jazzing Festival.
From the collaborations that Toni made with us in previous years came a great part of the repertoire that we would perform and that you can listen to in this CD. Themes that he had played with us and in which he left a sample of his art and originality. That was the reason why I invited Rita Payés (I can't get Started ), Èlia Bastida (My Ideal ), Andrea Motis (Samba em Preludio), Marc Martín (Softly as in a Morning Sunrise and Close your Eyes) and Joan Mar Sauqué (Motel and Polka Dots and Moonbeans).
I contacted Francisco "Blanco" Latino to see if we could do an original song and an arrangement by Toni and, from the proposals he made, we finally performed Densificación por Fuga (original) and Darn that Dream (arrangement).
The other 3 themes of the CD are arrangements by Joan Monné in which the trombones have a special participation: Angel Eyes, Love Your Spell Is Everywhere and the original by J.J.Johnson, Riviera.
For the concert I invited three important people in Toni's career: Perico Sambeat, Francisco "Blanco" Latino and Carlos Martín, three wonderful musicians who immediately accepted the invitation.
During the concert we read a text dedicated to Toni and we presented Sedajazz with a painting by Enric Bastida (Sedajazz is the project of Latino where Toni grew up, where he took his first steps in jazz music and where he has a classroom named after him). On one wall of that classroom is Toni's painting.
Sant Andreu Jazz Band
Joan Chamorro, musical direction 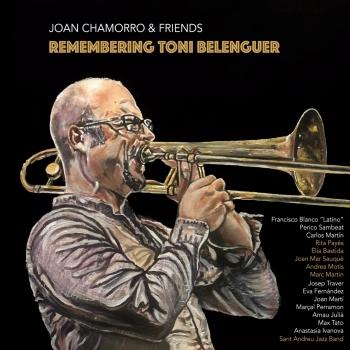 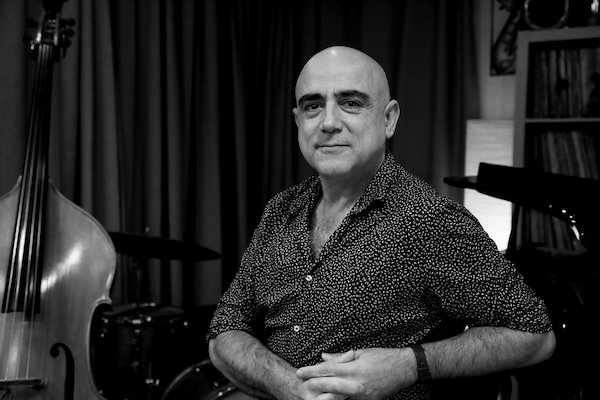 Joan Chamorro
(1962) studied saxophone in the Barcelona Conservatory under the mentorship of profesor Adolf Ventas. Parallel to his cassical studies he got a superior grade at the Barcelona’s Taller de Músics. Took part of the Big Band del Taller de músics, the Big Band de Bellaterra, John Dubuclet’s Big Band, the Big Band Jazz Terrassa, and Eladio Reinón-Tete Montoliu’s Supercombo, touring Europe at different venues and festivals, and appearing in the most renowned Spanish jazz festivals (Barcelona, Terrassa, Sant Sebastiàn, Madrid...). Chamorro has been also part of the Orquestra de Radio Televisión Española, where he had the opportunity to back big names in the scene as Manhattan Transfer and Stevie Wonder.
Apart from these early projects, Chamorro has worked as part of the Orquestra del Teatre Lliure, and the well-known theatre group the Comediants, having shows in great venues as New York, Santiago de Xile, Paris, and Venice.
Chamorro has played with such jazz legends like Slide Hampton, Tete Montoliu, Frank Foster, Teddy Edwards, Frank Wess, Bebo Valdés, Randy Brecker, Gary Smulyan, Dick Oatts, Ralf Lalama, Jessie Davis, Dennis Rowland, Carmen Lundy, Mike Mossman, John Mosca, Bart Van Lier, David Allen, Bobby Shew, Judy Niemack, along with important local names like Josep Maria Farràs, Perico Sambeat, Lluis Vidal, David Mengual, David Xirgu and many more.
Multiinstrumentalist (he’s able to play all different kind of reeds and upright bass); nowadays he’s popularly known as the founder and director of the Sant Andreu Jazz Band, and specially to lead the internationally acclaimed Andrea Motis & Joan Chamorro Quintet.
Sant Andreu Jazz Band
is an association for the transmission and dissemination of Jazz music and the musical growth of children and young people who are members of the Sant Andreu Jazz Band. 13 years of illusion and magical results recorded in 9 CD-DVD recordings and 12 albums that emerged in the “Joan Chamorro Presents” collection, starring members of the Sant Andreu jazz band: Andrea Motis, Eva Fernandez, Magali Datzira, Rita Payes, Marc Martin, the project the magic of the veu, Joan Mar Sauqué, Èlia Bastida, Joan Codina, Alba Armengou and Carla Motis, representative of the more than 50 young people between 7 and 20 years old that has gone through the orchestra .
They have starred in the documentary “A film about kids and music” by director Ramon Tort and awarded worldwide,
They have performed in such venues as the Palau de la Música in Barcelona, ​​the Licel, the Auditorium in Barcelona and have taken their music to national and international festivals such as: Switzerland, Stockholm, Italy, Marciac, Torreilles, Châteauneuf-du-Faou’s, Aix En provence, Muel, Xavia, Teulada and a long etcetera
They have been accompanied by jazz greats such as saxophonists Scott Hamilton, Perico Sambeat, Dick Oatts, Jesse Davis, Scott Robinson, Luigi Grasso, Joel Frahm, trumpeters Terell Stafford, Jon-Erik Kelsso, Ricard Gili, Josep Maria Farras, Fredrik Norén , Joe Magnarelli, trombonists John Allred, Wycliffe Gordon, Toni Belenguer, clarinetists Bobby Gordon and Kent Peploswky and their regular collaborators Ignasi Terraza, Josep Traver and Esteve Pi.
The Sant Andreu Jazz Band is a non-profit organization born from the educational project of the band of the same name: a jazz orchestra for which more than 60 musicians from six to twenty years old, led by the musician and pedagogue Joan Chamorro .. The history of the pedagogical project of the Sant Andreu Jazz Band is that of a success that has been simmered, after 13 years of work, without haste or great ambitions, which now aims to go further with the 6th edition of the Jazzing-Festival of Jazz of Sant Andreu and the Jazz House, where the rehearsals and some of the recordings with the invited artists of the national and international scene take place.
Joan Chamorro Saxophonist, clarinetist and double bassist. Founder and director of the Sant Andreu Jazz Band. It is part of the Big Band of Taller de Músics. He collaborates with the Big Band of Bellaterra, The Big Band by John Dubuclet, the Big Band Jazz Terrassa, Perico Sambeat Bigband, the supercombo of Eladio Reinon-Tete Montoliu, Orquesta de Radio Televisión Española, accompanies Manhattan Transfer and Steve Wonder etc. in several projects with the Orchestra of the Free Theater. For a year he collaborated with the theater group “Els Comediants” with whom he performed at festivals in cities such as New York, Santiago de Chile, Paris, Venice. It plays in the majority of the country’s festivals as well as festivals in France, Germany, Poland, England, Italy, Switzerland, Sweden, Japan, South Africa, Brazil and a long etc.
He has worked with renowned musicians such as: Slide Hampton, Scott Robinson, Jon Allred, Tete Montoliu, Frank Foster, Gary Smulyan, Dick Oatts, Bebo Valdes, Ralf Lalama, Nicholas Payton, Teddy Edwards, Frank Wess, Jessy Davis, Dennis Rowland , J. Maria Farras, Perico Sambeat, Lluís Vidal, Randy Brecker, Carmen Lundy, David Mengual, David Xirgu, Mike P. Mossman, John Mosca, Bart Van Lier, David Allen, Bobby Shew, Judy Niemack, Lew Tabak etc.
It has more than 20 Cd’s produced and made by himself. 8 Volumes of his Jazzzing Collection as director of the SAJB and more than 50 national and international albums as sideman. He has a film with the SAJB “A film about kids and music” (Ramon Tort address) that has been awarded to the best national musical documentary film has received 14 national and international awards. However, he has won numerous prizes and in many editions: JAÇ Awards, Arco de la Música Awards, Enderrock Awards, Altavoz Awards, etc.